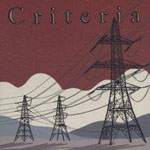 Fuck that. When We Break is the album of the year. No question.

Jesus, you wrote such a terrible review, you got it so wrong. I mean, here I am, rebuttal and all. But it needs to be done. People shouldn't be influenced by this pretentious, paltry excuse for an opinion. And a fucking opinion based on what? I'd be surprised if you even listened to the record. Maybe you don't even have ears! Because, I tell ya, if you'd just spend five minutes in the company of Criteria's music, you'd understand.

Understand what? Since you're too stupid to figure it out: Stephen Pedersen is a universal genius. I mean he graduated from Duke's, for crissakes! The guy's got more brain cells than the amount of bacteria on a bull's hide. And he sure does write some mean hooks. Just hear the stabbing guitars on "Prevent the World." Immense, tyrannous buzz saws, roaring riff monsters that just hit you. And why? Because this record is RAW. Because it was recorded in a fucking basement studio.

You said: "When We Break may be rooted in DIY indie credentials, but even a basement recording couldn't roughen up Pedersen's sanitised compositions. Musically, they might as well be Nickelback…"

Sanitised?! What are you trying to write? A biology thesis? This is a RAWK review. Devil signs and Hell's angels. Sex! Drugs! Diesel petrol! Now, don't get me wrong, Nickelback are awesome, but they've never written a song like "Ride the Snake." What did you call it? "Watered down emo, in the worst sense, for an ADD addled, MTV fixated youth"! This is fucking ADDER ROCK --- it lunges and it bites you and it, like, shoots its venom into your blood. But it's good venom. Like Spider-Man Venom: totally fucking bad ass.

I dare you, HACK, to find me a record more moving, and HARDCORE, than Good Charlotte's first LP, the one they did before they sold out and shit. You listen to that and then you tell me that "modern emo bands are like the boy bands of yesteryear --- except the shrieking teenage girls now exist on the stage, as well as in the audience." Modern? Emo was never old, hack. And what's this Pinkerton you talk of? I googled this so-called "Pinkerton masterpiece" last night, and do you what came up? My first fucking result was some "security and guarding services" company. So that proves it, unequivocally, you were talking bull. Just like your whole review. Hack.

"I don't have the lyrical abilities of Tim Kasher or Conor Oberst or a lot of the songwriters on the label. We're here to rock. We want to entertain you with our anthems. By no means do you have to study the lyrics."

"We're here to rock." I'm with you, brother. It's all about taking your axe and busting out some naughty grooves. But, alas, some people will never get it: "When We Break boils down to nothing but musical mediocrity. Everything here has been done (better) before. It's a surprise that the people at the usually reputable Saddle Creek would want to market this; it's cumbersome, grating stuff."

Well, screw you. You can go back to your Philip Glass recordings and Smiths t-shirts for all I care. Just retract your review. Hack.