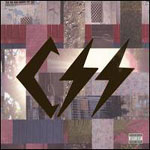 If CSS is playing a game, it seems pretty simple: self-deprecate as a matter of post-cool. Reveal the band’s acronym within the album’s title, consistently wrapping artistic identity in on itself in order to warrant flatulent, American pop culture references. Means the “intro” song is about how the band stinks, or about how the band’s modus operandi is creating suction, both kind of funny considering the band’s moniker consists of being totally over sexiness. Then, logically speaking, the tracklist orbits around simple components in the same vein; dancing, fucking, and satirizing are CSS’s trifecta of verbs, and singer Lovefoxxx yelps this trinity in cruel monotone and dopey cadence. Really, she’s got vitriol and command enough, so that when she orders the listener to “Lick lick lick [her] ar-tit, / Suck suck suck [her] art-hole,” the listener might wanna. Or throw up.

As the sextet hails from Sao Paolo, is mostly female, and quarries inside patinas of licentiousness, my guess is that if you are getting this disc through Sub Pop, you might think Brazil’s a pretty sexy place, and maybe you want to latch on to her art-orifice, ya know, up to you, which means the band’s got you where they want you.

By no means does the subject matter necessitate a vapidness in the music itself, and for the most part, CSS is able to pull off an ineffable sultriness through straightforward ethos. When an easily distinguishable beat is built on snare and trap-clicks, on an arpeggiated casio melody or a synth-heavy guitar riff, and on cheerleader spirit, one’s first impulse is to move, seductively, sporadically, obnoxiously, whatever. Drummer/vocalist/only-male Adriano Cintra keeps steady and fevered pulse, steady and fevered like it’s his job, which it is. That and being much too sexy. His vocal duties are minimal, appearing over proto-punk ripper “Patins,” a dorky relationship testament whose name I think means “Skates” or something like that, but his mustachioed prattle is a nice counterpart to Lovefoxxx’s bang bang howl. The two are the stars of the group, not because they have an incredible chemistry, but because their parts, repetitive and snappy, are the foremixed impetus for dance.

Which leaves the other four members to fill guitar, keyboard, and bass duties. Perhaps this is a ruse, too, because every track works an economy of sound, using guitars and keys, often leaden with buzzing effects, as diddling bed to beat and vocal. “Alcohol” rubs up against a nameless Caribbean locale, unsettlingly, and the town square holds an organ grinder whose monkey concocts a “woo-hoo” melody. “Meeting Paris Hilton,” which is about what you think it’s about, with lyrics just as obvious, hurtles over industrial clanking, letting up for thin chime squiggles. Single “Let’s Make Love” uses the same electronic arsenal, picking a juicy little funk line, and Lovefoxxx does her slurry, saucy rap thing. And Cintra does his rudimentary snare thing. Hi-hats are heavy, motherfucker!

But what are these other members doing? Where’re the layers of instrumentation, the hidden esquinas, the darting unpredictability of a dance outfit with eager members to spare? I crave skittering snare, salivate for some loaded harmonies to back up Lovefoxxx’s shallow register! “Music Is My Hot Hot Sex” is what I’m tossed, CSS’s subtle oasis, all devilish bass stomps, restrained cymbals, and a chorus that actually has tunefulness, ups and downs, tension and aspiration. The lyrics are clever, if windy, the Portuguese bridge playful, and for once, for all the goofing with pop image obsession the album beats to death, the first true connection between music, dance, and party culture is made. All of the loud pistons of inanity sync up, and CSS seems to be making a point. Hmmm: Sexiness isn’t about image, in fact, maybe it’s about anti-image; being cool is about not trying to be cool, and that’s why dancing is the physical manifestation of all this, because it’s instinctual, and if said dancer were to think too hard about moving, said movement loses the essence of dance. Or…: Paris Hilton’s a goddamned bitch.

Message or no, CSS succeeds as a tireless arrow, always aiming at something heavier than plodding beats and AOR. When the instrumentation and composition of the songs reduce to bland and trippy childishness, the focus is placed on Lovefoxxx, her voice and lyrics. Too bad, bland begets bland, and even half-assed ESG comparisons won’t save the frontwoman from the limits of her colorless speak. So sad, party monsters, Cansei de Ser Sexy is a catchy, brief, and sweaty romp, but nothing that will wow, nothing that’ll smart, nothing that’ll leave a phone number next to the dildo on the bedside table the morning after.