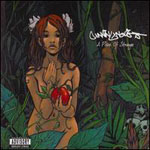 A Piece Of Strange

The prejudice is corrected by the blues guitar and voodoo croons that swallow you whole immediately after you press play. Having heard Hip Hop Is Dead and More Fish it’s a safe call: A Piece of Strange is, in units of measurement comprehensible only by reference to Lil Wayne’s ego, the most sophisticated loop-based rap record of this year. Where Beauty and the Beat (2005) could only have come out of Boston or 1968 if it were a zip code, APOS is its psychedelic Southern counterpart: producer Kno--who would have been the creator of the most celebrated remix version of The Black Album (2003) had Blur’s new DJ not nicked Michael Jackson’s most valuable asset in the best GQ-approved rookie PR stunt ever--leaves the dust on, and isn’t afraid to let a poisoned church organ suck your soul for eight bars straight so long as it complements the swamp-deep navy-blues feel of the first Cunninlynguists album that isn’t merely another rap record about rap and rap records.

See, the restructured Cunninlynguists are too good for that, and A Piece of Strange is much too good for that. In fact, it shows the CL’s skipping the teetering transitory record prerequisite for most acts that struggle to find a clear voice, and moving into the “beautiful, experimental, high-concept record” domain with an album that, song by song, examines social problems by vague reference to the Bible. “Ugh,” right? Inherently preachy and didactic, right? It’s not: the CL’s outclever the eyerolling, and rearrange the preconceptions tempted by the Garden of Eden image on the album cover. The Biblical themes are actually just touchstones for questioning modern morality, as outlined by the thematic cheat sheet here. The album-map helps link the subject matter of each song to a moral counterpart, which counterpart then gets put under the microscope by way of contemporary example, rapped. “The Gates” references “Disorder and Judgment,” and the song sees guest Tonedeff play the role of a firefighter discussing his entrance into heaven with St Peter (MC Deacon the Villain), who examines how the firefighter has never discriminated in saving countless children from fires, but has also abandoned his own daughter because she had a mixed-race baby. The wandering listener is corralled into a song that examines how normative social roles (“being a good X”) can mask entrenched social ills (racism) by treating symptoms and covering up causes instead of killing them outright. Which is some complicated shit to do while rhyming the same multisyllables twice per bar throughout an entire song, back and forth between two mcs: “Sometimes it’s too late to fix these things / The pristine dream was over / Had to face the fact she split these genes / with his sick seed / With skin the darkest pigment seen / And so I kicked and screamed, until we found the peace the distance brings.”

Throughout APOS the CL’s jump the line between good rap and good theatre, and often move straight into good playwriting. And given that there is a full cast of characters to follow around the album’s religion-twisting arc, the record plays like a sad, dark, black-magic midnight-in-the-garden-of-good-and-evil version of A Prince Among Thieves, except with better beats. Immediately after “The Gates,” Tonedeff’s character is subjected to one of four gorgeous instrumental interludes -- this one called “Damnation” -- and is quickly dropped into “Hellfire” where both newcomer Natti (a welcome replacement for the departed freestyle-and-not-much-else-capable SOS) and stalwart Deacon light him up, injecting a little back-handed battle-rap levity (because now he’s in “mc hell,” see), or, at least, hinting at it, since no one’s finding anything light when rapped over Kno’s piping organ and coal-crumbling break. Deacon again plays with the theme and its language and draws a link between “hell” and inspiration (“folks catch chills off the skill it’s / The Vill, ill will, liquefy shields with fire / too late to secure the perimeter / It’ll enter your soul / you can’t control the limits of fire”), but Natti steals the show with this: “Zippo flow.” Yeah, that’s it. That’s a killer line.

The most remarkable thing about this record, however, is that despite the thoughtful, insightful, and above all creative writing, and despite Natti’s and Deacon’s agile-but-avalanching growls, and despite the fact that the record capably flips religious dogma and spins it, so you see both sides of the coin while they blur together, all you’ll really take away from the first five listens is the sheer beauty of Kno’s somber, lush, and varied production. The easiest thing in the world is to make a mediocre up-tempo rap beat for a fantastic MC to rhyme over. The hardest thing in the world is to make sure that your listeners catch every single profound turn of phrase your pair of baritone, grumbling mist-faced MC’s make while holding that listener’s hand through their challenging writing with soft guitars, delicate keys, phantom background vocals, and slow-burn muddy-funk horns all layered like Breaking Atoms (1991) never happened over perfectly-matched, thudding, thick drum hits. If ATLiens (1996) is still your definitive Outkast moment, then this is probably your album of the year.