1. Daikaiju Die!
2. Attack of the Crab Women
3. The Trouble with Those Mothra Girls
4. Sharkakhan
5. Showdown in Shinjuku
6. The Daikaiju Who Loved Me
7. Son of Daikaiju
8. Incognito
9. Super X-9
10. Farewell to Monster Island 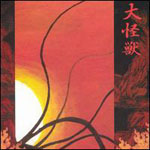 Four guys--known only as Secret Asian Man, Dymaxion Lee, Brain Conflict, and Mr. Nein, represented on their inside cover by four kabuki masks--decide that they want to get in on genre-bending, and somehow decide that the niche they want to carve will simultaneously involve spy guitars, surf rock, and prog (wtf). The result is the soundtrack-on-speed that was never made for Pulp Ficton, and I couldn’t tell you to exactly what power, but this is pretty fucking up there on the “novelty” meter.

So novel is Daikaiju, in fact, that it may distract you from the fact that there’s actually some decent music under all the mystical nonsense and Godzilla-throwback inside cover art. They may have silly alter-ego names (and seriously, who hasn’t given himself the “Secret Asian Man” alter-ego?), but these four characters have no shortage of technical strength to apply to their surprisingly succinct jams. This is spy-surf-prog, but it’s still relatively tight. Each mini-suite is decked out with at least two or three hooks, complex guitar parts, nearly math-rock levels of percussive complexity, and some solid bass leads.

Occasionally, the congealing of those positive aspects results in a keeper; “The Trouble With Those Mothra Girls” welds together all of the above with a keen sense of dynamism. It’s pure driving background bliss, with a serious romantic ventricle in its melodic guitar heart, progressing quickly and efficiently through increasingly layered and precarious passages, until a wonderfully executed guitar solo slaps on the song’s exclamation point.

Pointing out the technically proficient elements in the other tracks here would be a waste of words, because frankly, technical proficiency is the last thing that Daikaiju lack. You won’t get tired of these guys because they’re not skilled enough.

But I suspect that you will tire of them, eventually (once you’ve played it for your fellow music-loving friends), because Daikaiju is an album more concerned with showmanship and atmosphere than purpose. “Son of Daikaiju” roils about in impressive guitar work, and the clean atmospheric movements of “Incognito” are plenty remarkable, but have no thematic dynamism to them. Fundamentally, most of these songs are highly predictable in tone and pace (Pulp Fiction tone, quick pace), and leave little to the anticipation. Within the first few bars of each song, the band’s path is relatively clear, their tempo reliable, and their ideas almost transparent. Besides “Mothra Girls,” the only track here to break the mold is the sterling Santana-caliber “Farewell to Monster Island,” with its beautiful, aching swoons and uses of space.

If you’re a CMG reader who thinks I’m too obsessed with technical evaluation in my general evaluative philosophy, I would of course say I’m not; I merely believe that technical nuance contributes to nuance in purpose, and thereby makes figuring out a band’s purpose out more rewarding. In Daikaiju’s case, instrumental nuance is there merely for showing off, rather than really creating any greater purpose. In this aspect they suffer (slightly less) from the problem that (terminally) plagues The Mars Volta: there’s no meaning, no idea to be gleaned from their music aside from its interesting concept.

Which doesn’t take away from the fact that their musical concept is highly unique--but without the movie to play the music to, the experience of this music is somewhat hollow. I see two possible remedies: either enhance the quality of the musical dynamism, or find Quentin Tarantino and make him listen to Daikaiju stat. Otherwise, the group’s sizeable talents may amount to precious (and I do mean precious) little.