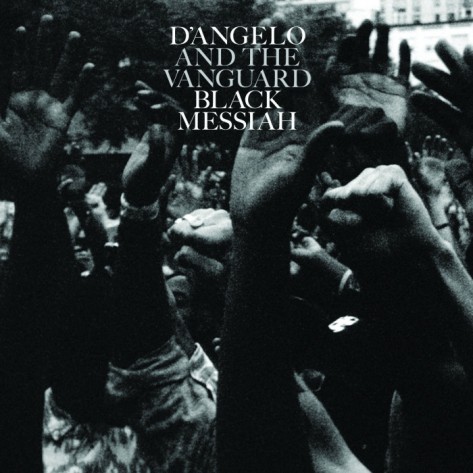 D'Angelo and the Vanguard

It is well that this review is late. And it is meet that D’Angelo’s Black Messiah dropped, unexpectedly and rather fashionably, too late for the Glow to consider adding it to our year-end feature. Because the whole Unison/Harmony shin-dig was about affirming music we loved in 2014 while delineating and owning the ways in which that love is, ultimately and absolutely, subjective. This is truth. But a review of Black Messiah needs space from that advent. There needs to be a time to breathe, maybe hopefully to forget a few things about 2014 and year-end features and lists upon lists forming a horizon and then a vanishing point where you and I and the music we listen to can disappear into the oblivion of too-muchness. This is time for us to be alone with this particular record, and that’s something we need to do. Because Black Messiah is—now watch my semantics loop themselves into a figure eight—intrinsically and singularly good.

And so this can’t really be a review, some qualitative analysis of something that needs it not, that is irrefutable and whole. I don’t know that I can even seek to describe what makes Black Messiah this way. There is no criticism for me to construct, no framework to provide. It would be like building the flimsy bones of a house around the dream home that D’Angelo has already built here, with its pristine proportions and feng shui that’s off the fucking chain. So instead consider this an invite from one visitor to another; let’s go chill out in that home, let’s dwell there for a time, communing in its goodness. The air is rich with scent and vapor, languid and alive. The decorations are tasteful but vibrant. Somewhere an expensive cut of steak is sizzling, and a tumbler of bourbon lies untouched upon a countertop made of the stone our forefathers landed on. ?uestlove plays drums in the basement. And the chair you’re sitting in is comfy as fuck. Now sink.

The directive is simple: listen to Black Messiah. Listen to it a lot. For only by listening to it can you understand me when I say to you, hey, doesn’t it feel really goddamn yet quietly important when the drums lock in at the end of “1,000 Deaths”? Like the shuddering weight of drawn-out orgasm, but orgasm like petit mort, like a literature of history of pain, but in like half a minute or whatever, and the pen that it’s written with is blunt and unblinking. Or how about the subtlety of ambition in the chord progression of “Sugah Daddy,” the stealthy upward stroke of an inward grandeur? Confidence is an instrument that D’Angelo plays on all these tracks, anchoring everything (including Pino Palladino’s thousand-anvil bass lines) to something so self-assured there is only it and its forward movement. Everything else is scenery gliding by in rear-projected streams. And is it not true that “Ain’t That Easy” shifts a bulwark paradigm with a simple blues riff, a modernizing modulation of its basic form transforming R&B’s past into its future? Or what of closer “Another Life,” with its melody that feels both anciently familiar and yet totally new, leading me to a quantum mechanics Wiki in hopes of finding some sort of explanation for the art concept of “timelessness.” Apropos for a track that is 100% about sex and 100% about spiritual nirvana—so, the sublimity of sex—making it the best song of its kind since, God, I dunno, “Hallelujah”? Which reminds me: “Prayer” is perfect sound, perfect thought, am I right. I am. We are. This is right.

Regardless of race, don’t feel left out or overly co-opted by the title and rhetoric of Black Messiah. Like “Another Life,” this record is about many things, is many things. D’Angelo professes his thesis statement in the liner notes even as this statement is but a particle of the full experience of actually listening to this album. These are not the politics described by games, agendas, media conglomerates, numbers. These are the politics that are the earnest, directional language of, like, people and the world. Black lives matter = all lives matter, and vice versa. The exclusivity of Black Messiah is inclusive; its specificity rings universal. It treats every note with care because every note is pregnant with meaning. Nothing is marginalized, and in that we gain everything. That backward yell at the end of “Back to the Future, Part I” is a signature, a subversion, a manifesto, a second.

15 years of D’Angelo’s setbacks and struggle and rehabilitation since the seminal Voodoo (2000) could have provided a chiaroscuro backdrop for this new record to play out against. Instead, the music’s healing has already happened. We see the scars of D’Angelo’s wounds almost as afterthoughts, jotted memos of a memory. Black Messiah, simply, lives: D’Angelo is risen. If I were to dare to trace the inherent virtue of Black Messiah to an origin, my best stab would be the purity of its creative process—like the core of a star burning perpetually unto itself, heart of plasma that emanates light and warmth in indiscriminate halos and swathes, a pulsing radiance of a sphere that is life-giving, nurturing, and signals the harvest. As myth would tell us, there is no difference between Savior and Creator. The act of creation is the act of reclamation. And if there is nothing new under the sun, still, we strive to add something—anything—of worth, to reproduce the light where its absence is felt. 15 years flitting in and out at the fringes of our perception, how was D’Angelo not claimed by the void? Black Messiah shouldn’t have happened, couldn’t have happened. But it did. And it is good.