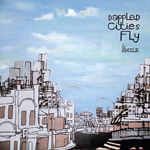 Dappled Cities Fly is exceedingly good at being pretty good. This Australian four-piece has everything in place: the three-random-words name (a technique normally reserved for album titles, but aptly employed here); the laundry-list of required influences (Flaming Lips, Built to Spill, etc.); cute, colorful packaging, with fonts bummed from Vespertine and art lodged somewhere between Quasimoto’s and a Final Fantasy game. All of it works together, one element playing into the next, a jewel-cased Indie Pop Album. Somewhere, there’s a think tank working on a formula for this shit (probably the same think tank that figured out how, on an abacus, to make a garage rock record, and subsequently released that album by the D4)-but until they perfect it, we’ll have albums like A Smile to sate our nigh-unquenchable thirst for solid experimental pop music.

Because the first four songs of this album are sorta phenomenal. “Peach” is a swirling statement of intent, pulled from the same ether as “Caring is Creepy”; it gushes from Coldplay pianos to throttled, gorgeous, tape-looped bliss-outs, all beneath a burning blue sky of trilling Radiohead guitars. “Blame it on the Boys” pulls the same fading trick, this time channeling Interpol and Trail of Dead. “League of German Girls” is at once a hymn and a march, laments cooed over quiet guitar crescendos and stately, pattering drums. The album’s four-part opening is closed with “Corpus Kinaesthesia,” a fierce, staccato track that culminates with a lilting guitar line that ranks as one of the most tauntingly gorgeous of this middling year.

Things aren’t nearly so consistent afterward. The album’s biggest misstep is “As I Lay Dying”; sequenced as the album’s centerpiece, it freezes the momentum built by the opening 1-2-3-4 punch, and the song’s keening, Morrissey-esque choruses are ludicrous. The song effectively kills the good will bred by the album’s first half. Kids only have so much patience for unknown Indie Pop Albums these days, and an ornate, flowery epic in the middle of an otherwise engaging debut is a damn shame. It’s fortunately followed by “My Head’s Queen Ant,” one of the album’s best (and best-named) moments. The Shins comparisons are never so apt as on the verses of this song, which crumble confidently into shrieked “Hey!”s and build back into drawn, single-note jams.

From there, A Smile loses it confidence and ingenuity. The remaining songs are pleasant enough, but generally lacking the bizarro hooks and inspired dynamics of the album’s best cuts. It’s damning praise to call an album “a good substitute,” but praise be damned, that’s what A Smile is. Still, the amount of substitutes it provides-seriously, just look at all the bands I’ve compared it to so far-points a finger past this pleasant debut and toward the horizon. This impatient kid will bookmark them and wait hopefully for their Indie Pop Masterpiece.