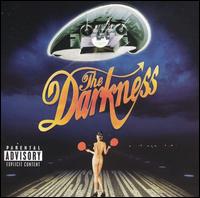 Tweet
My first encounter with this dubious band of late '70s, early '80s arena rock worshippers occurred sometime between the wee hours of three and four o'clock in the morning, on one MTV2. You may have heard of it.

My first reaction to this unnerving group of British spandex/leather/catsuit wearing queens was, in a few words, "Do they have balls?"

My second reaction to this brilliantly laughable, eminently energetic, shamefully catchy collective of howlers with their electricity-shooting instruments was, in a few more words, "It takes a whole ton of fucking balls to even try this. And…and it's…good."

Upon which I promptly removed my pants to see whether or not my own cojones had moved out of their current residence and run off to take shelter in some den of manliness in which I was certainly unfit to enter given my giddy, yes, embarrassing joy, at seeing the video a second time that night.

Yes, kids. At least one Cokemachineglow reviewer loves the Darkness. And his name is Scott Reid. Haha, just kidding, it's me. Actually, make that two, because I know for a fact that Todd Aman has had "I Believe in a Thing Called Love" on constant repeat for at least the last two weeks.

And when it comes to it, there's little extra justification that I need for liking this album so much than that it's the first album in a while that either Todd or I have popped into our systems that we've actually kept on repeat, and not gotten tired of. It's simple: the songwriting is more than decent--nearly all of the album is packed with memorable hooks, even if they are wrought out of bombastic power chords. It's a shameless combination of Van Halen, Black Sabbath, and the mythic ridiculousness of Zeppelin (check out the lyrics to "Black Shuck," about some legendary one-eyed dog that wreaks havoc on a small town) into a roiling mass of arena-rock pleasure that indie guidelines advise you to hate. But when you hate a band for an image that's more than a little reminiscent of Whitesnake without listening to them, there's little that separates you from those supposed poseurs who love a band for their image.

So what if listening to the Darkness is the equivalent of eating a big tub of ice cream and feeling like a big fat bitch? Just because they're shameless doesn't mean you should be ashamed of enjoying them. The hooks are there, the indulgent solos proceed without interfering with the underlying songs structures. And by God, it's a hell of a lot of fun. All of the calories, all of the yummy; take one with the other, and don't worry about it.

The Darkness do peak with "I Believe in a Thing Called Love," where three different, excellent hooks are laid over by Justin Hawkins's unmistakable vocals, with all the pomp and willful over-the-top attitude that these Brits can muster. Hawkins's voice often reaches to near-yodeling heights of effeminacy, while staying rough and gritty on more AC/DC-type tracks like "Black Shuck," where call-and-response choruses will have even the most skeptical man pumping his fists. But even though they peak around the middle of the album, more highs are in store later on; the over-wrought yet superlative ballad "Love is Only a Feeling," "Stuck in a Rut," with a ludicrous Frankenstein-ish interlude that blows out into a wicked solo, and even "I'm Holding My Own," a perfect closer, if less impressive songwriting-wise than a couple of the other standouts.

Seriously, I can't remember ever banging my head so hard or air-guitaring so much to any band in recent history so much as I have with the Darkness. They will remind you that rock can still have guts, even if it is (gasp!) derivative (here's a hint: nearly all of it is), and that, in the end, just because you wear ass-tight catsuits, doesn't mean you can't have the biggest balls of them all. This is an album that took guts to make in an era of petty cynicism; that it pays off in spades may be a hint that perhaps we can all still be saved.

Oh, some of the other guys on staff are gonna hate my guts.