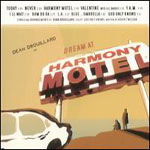 For years, Jon Brion has been promising us another solo album. Last year’s soundtrack to I <3 Huckabees had some great tunes, but it may as well have been an EP; that’s like delaying Thanksgiving dinner and putting out another bowl of sliced bread on the table. Thankfully, we have Dean Drouillard and Dream at Harmony Motel: quirky, neurotic, immaculately produced pop music.

The obvious Brion similarity shows up as soon as the singing begins. Drouillard has his own phrasing and vocal inflections, but the timbre of their voices is near-identical. Harmony Motel tends to avoid Brion’s vocal multi-tracking, though, leaving the singer to stand on his own. Though many of the songs, particularly the opening “Today,” are reminiscent of Brion’s studio bombast, Drouillard often works with cleaner, simpler arrangements to great affect. “Dum Do Da,” for instance, begins with a guitar and a three-note melody before adding layer upon layer of pop sweetness to the Dream At Harmony Motel cake.

Much of the album evokes the lonely atmosphere of a smoky bar, particularly the staccato keyboards of “Never.” The appearance of a flugelhorn and female backing vocalists takes the song into suave Bacharach territory before the bridge melody stumbles outside looking for the Beach Boys. Drouillard has no trouble admitting his influences, finishing the album with a pleasant, if not particularly ambitious cover of the Beach Boys’ “God Only Knows.” He’s at his best on “4 a.m.,” which continues with the late-night feel, finding the narrator searching for words when an old flame calls far too early for comfort. It’s a stripped down track that reveals his gifts as a composer and a lyricist without drawing any immediate comparisons; more of these, please.

The album is not without weak points, however. The carnival waltz “Harmony Motel” and “Blue… Umbrella” are unnecessary instrumentals. “Blue… Umbrella” comes off as a Jeff Buckley outtake sorely in need of some lyrics. The track proceeds aimlessly for seven minutes, alternating between two sections that eventually gain volume but never really climax. “Valentine” pairs him with Jill Barber, who recalls Emmylou Harris but fails to transcend the song’s awkward country aspirations.

Drouillard never juggles his influences quite as commandingly as the virtuosic Brion, but for an independent musician selling his record on CD Baby, even approaching the same ballpark is an undeniable achievement.