1. Sinthtro 2. Ticket To Immortality 3. Death Or Life We Want You 4. Hate Then Love 5. There Goes My Outfit 6. Bandwagoneers 7. Fear Made the World Go ‘Round 8. You And I Are A Gang Of Losers 9. Whites Only Party 10. Ballad Of Humankindness 11. I Fell Deep 12. Find Our Way To Freedom 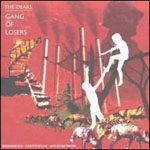 Not a [stylized] comment to be taken lightly, as it denotes, under normal circumstances, a flabbergasted and awed, unnerving reaction; reaction to music, in CMG’s case, where notes and the boreal spread of notes abound in startling arrays of timing, prolificacy, recontextualization, atonality, absurdity, structure, and so on and so forth. In the case of the Dears’ third “official” album, and first for Toronto imprint Arts & Crafts, home of interesting artists like Feist, New Buffalo, and the Hidden Cameras, normalcy is understated for a much more mediocre, boring, phoned-in, lyrically tripe-y batch of tip-toeing Brit-pop snooze-o-rama-fests. The dashes don’t end there--they only multiply and increase in girth--because asides are necessary and parentheses won’t do any justice. Yet, What. The. Fuck, the Dears? Must we list the reasons behind such a standardly exciting phrase being bastardized by blandness?

We must: First, the Dears are a band--no! a gang--of mendacious politicians. We must get this over with, put this to rest, the fact that a gelatinous veil of latent political, liberal intentions seems to hang over every freshly greased joint on this contraption. Take a gander at the track names; sufficiently amorphous but instinctually melodramatic. Then notice singer/lead buck Murray Lightburn’s incessant allusions to those left out, to “losers,” to “pariahs,” to people that don’t live up to their blatant racial stereotypes. This, combined with a malaise of symbolic touchstones, like guns and blood and fear and leadership and statements beginning with “clearly,” and with the fact that Lightburn, who is black, further investigates socially trying perspectives in “Whites Only Party,” manufactures, intended or not, a shade of political fervor only as honest and as effective as an Art Brut illusion. Lightburn croons--because he’s got the band’s secret weapon, a powerful, if aching, tenor [I will only use “croon” this once and these are the only lyrics I can allow here]--“Well I thought that we’d all care about peace / And I thought that we’d all care about love and loss,” from the tragically titled “Ballad Of Humankindness.” Are ya serious? And the rest of the album shares similar platitudes, never saved, elevated, or really justified by layered orchestration, earnestness, or even Lightburn’s range. It’s exactly this kind of overwrought, insipid poetry that drowns an already tenuous bloatpop spectacle. Must we explain Gang of Losers to those uninitiated with the Montreal sextet?

We must: Second--being the second reason why the F-bomb is so appropriate for this dud--Losers rides the fluffy tails of two albums preceding, the chewy, introspective End Of A Hollywood Bedtime Story (2000) and the chewier, introspectivier, not to mention grandiose, No Cities Left (2004). Of course, they have the 2004 live disc and the 2001 compilation of Lightburn’s unreleased recordings, but Losers makes for a logical continuation of their proper studio output, retreading themes of love, loss, understanding, windy whatever, with an over-publicized restraint in their typically starsucking sound. So, as opposed to “orchestral,” hiccuping electric arpeggios, rising dunes of synth, multitracked and precious vocals from keyboardist Natalia Yanchek, and plodding, repetitive snare-whomping are “stripped” and, like recent, much better Delgados fare before them, represent a new poppier and concise version of a band already maligned with hyperbolic compliments and an excessive palette. “Sinthtro,” despite that godforsaken name, is an instrumental too obligatory to be contemplative. “Ticket To Immortality” is a middling climb of Morissey harmonies and crunching guitars buttressed by aimless white space. “There Goes My Outfit” attempts a slinkier grace with strange bass buzzing underneath the already worn “na na” outro, but the total, legato and all, might as well implicate the band in charges of plagiarism, aping their own first couple tracks. “I Fell Deep” busts out, and uses those words as lyric, with an organ and a sacred hammering home of drums and more plaintive vocals, and then “Find Our Way To Freedom” pauses for a morbid undercurrent of deep humming before finishing in exactly the same way. Yeesh, how long is this thing?

And thirdly, it’s hard to stomach a pretty damn good song amongst so much loose dreck. That song is “Love Then Hate”…I mean, “Hate Then Love.” Whatever. Who cares? The lyrics, once again, do not matter, but Lightburn’s choral melody is just the kind of pleasing Houndstooth throwback that Charles Bissel could handle. The song maintains a balance between riff and production, between strained bombast and natural, earned tension, a healthy success where every other song basically loses control. Even if studio sheen has never been a killer with the band, and doesn’t become intrusive enough here to lapse into consternation and numbness, the Dears seem to achieve maturity through a retroactive practice of pop sense, doing very, very little to actually pare their music down into concise, better realized arrangements.

So, What. The. Fuck: tropes out the wazoo, infuriating and conspicuous politics, soaring vocals that are as hollow as Mark Abraham’s puppy-hating heart, and more critical lauding than you can shake a Juno at. Gang of Losers has left me with little but slight unbelief, a new desire to listen to Elbow’s first record, and a phrase that employs periods instead of exclamation points in order to drive home uninteresting doubts about fellow critics. The album isn’t terrible enough to expunge all of my faith in humanity, but I’ve been flabbergasted by the mundane, which, for Losers, is the sign of a loss of catharsis and of a mainstay in its final throes.