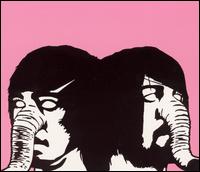 You're A Woman, I'm a Machine

No one is quite as adept at generating a hype hurricane as Vice Records. Perhaps it’s their Montreal heroin chic; perhaps it’s the mythically hip Vice parties featuring performances by the Vice band roster; perhaps it’s that kooky Vice magazine and the raunchy photos within; but whatever the case, they seem to have an extraordinary ability to assert their will to promote an album to the hipster hive-mind (witness the hype surrounding the Streets, the Yes New York compilation and even the ill-fated Stills.

And in this music scene, that’s really all you need to prey on the insecurities of music geeks everywhere: tell them they are missing the Next Big Thing (NBT), and they will run to their nearest hip music store to be the first in line for said NBT. For the past few months there have been whispers floating around the internet and the scene in general about a NBT dance band that’s actually for real, as opposed to all those other NBT bands that were hyped as the real deal but fell painfully short. When you throw in the name game move that was either a foolish faux pas or a brilliant stroke of marketing (where sexy NBT band got into a legal skirmish with legendary neo-dance-punk producers the DFA for titling their band Death From Above), the ante has been upped to dizzying heights in the high stakes game of cred and hype.

The real shocker in all of this? It appears that the hype is, for once, actually understandable, if not completely warranted. Death From Above 1979 have created a truly rocking dance punk album that fulfills on the promise of a dubious genre; other artists in this so-called movement have only hinted at something this fun and dance-able. The most interesting find to report? There’s actually some substance beneath the predictably dance-y surface---not much, but some. And, as it turns out, that's often enough.

DFA79, Toronto’s own Sebastian Grangier and Jesse F. Keeler (looking mighty heroin chic themselves), keep the rock simple and primal with only drums, vox and hellacious, filthy bass. JFK rocks the bass like few others, utilizing a keen sense of timing and keeping a surprising melodic balance through some insane levels of distortion when he’s not just plain shredding like a madman. Grangier bangs out ferociously icy beats, expertly reeling Keeler in (though, one gets the sense Keeler would be entertaining all by his lonesome, so long as he had his bass axe and some electricity). Both fellas sing and demonstrate a startling ability to sound like one another (Grangier takes the lead), as well as the Rapture’s lead singer, Luke Jenner (although way less mannered, and with noticeably less Robert Smith-isms). The terrible twosome demonstrate quite an ability to turn out a nasty dance tune thick with biting hooks, double time rhythms and complemented by heartfelt, plaintive lyrics. If that wasn't enough, they also have cowbell.

Opener “Turn It Out” sets the frenetic, icy horror dance tone. Announcing their retro-resurrection intentions immediately, as if their name didn’t tip you off, they implore the listener to “turn it up, turn it up.” The mood set, “Romantic Rights” pulses out of the speakers with a bass intro that sounds like something trying to break out of a box. What follows is a dance-y (shocker!) song that features an sneered lyrical contradiction: “I don’t need you, I want you,” vs. “Come on baby / Let’s start a family.” Whether the latter is just meant to be a sleazy come on or something more substantial, it’s at the very least an interesting diversion from standard operating dance-punk procedure and at best a fresh complication of stale boy wants girl vignettes.

One of the more interesting things about the DFA79 sound is that they’re also able to add layers a vaguely nostalgic underbelly to their songs, which mainly accomplished through use of a repeater pedal, some nice riff-layering by JFK (sounding a lot like some of Nick Zinner’s impressive guitar-work on that Yeah Yeah Yeahs album), as well as the occasional moog appearance. The boys also know how to vary their sonic assault from song to song and use dynamics to their advantage. While that sounds easy and silly, it’s often the difference between a good single and a good album. “Black History Month” features this understanding of dynamics perfectly; it’s a slow building song featuring a mournful riff buried underneath a ripping bass line that grows to a fantastic explosion towards the second half. Grangier slurs the lyrics in a cool, vaguely melancholy sneer. And, yes, the cowbell makes an appearance.

The title track is flat out ferocious; JFK’s over-driven bass destroys, and Grangier’s drums pummel, rapid fire. “Pull Out” continues the mad coke-rush of relationship politics that “Romantic Rights” started, and is one of the duo’s stronger songs, lyrically. As “Sexy Results” coolly flits away, you realize the DFA79 aren’t doing anything terribly original. In fact, they’re merely participating in the retro-revivalism started long ago by the Strokes and carried through by the likes of the Rapture, Interpol, the Stills, the French Kicks and Franz Ferdinand (and, seriously, countless others) by dance-ifying and, more importantly, name-checking the normal slew of early ‘80s influences. While this trend probably doesn’t bode well for those who treasure innovation in music, all of the bands mentioned can write the fuck out of a song. It, along with I'm A Machine, is, if nothing else, a load of fun to witness, and yes, dance to; so don’t buy the hype relentlessly spewing forth from Viceland and their minions, but you may want to buy the album.