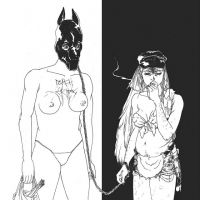 In one Japanese fishing/sea-to-table practice, it is one of the fishermen’s jobs to insert a thin bamboo piece into a fish’s anus and feed it through until it ruptures the swim bladder and breaks the air sac, ideally without harming the inside of the fish. Apparently, this butthole bamboo thing makes fish delicious. And what a small—like, impossibly minute—space, the fish anus, to be the whole crux of one’s career/routine. Whether or not said fishermen have other duties (is this something you can multitask with though?), his or her job is to focus on that one, single, poopy space, probably no larger than a pen-point.

It is with both mammoth, bullheaded velocity and a fish-asshole-narrow precision that Death Grips approach their preternatural blend of highly charged and viscous music. They drive, resolved from the onset, at one goal: to “blow [our] system up.” And they drive at it relentlessly. Which, generally speaking, is a goal we can get behind, falling squarely into the majority who feel likewise. Unfortunately, as far as CMG is concerned, we fall as squarely and awkwardly into the minority of staffers who don’t feel The Money Store is unlistenable. Truly, it’s easy to sympathize and grasp how someone could feel that way about this album. It is a fantastic lot of blunt-force energy shoved into one remarkably narrow ambition without yield or even, simply, a breather. Especially when that ambition is to blow shit up.

The conversation surrounding The Money Store has been all about algebra. Trying to figure out exactly what factors have combined to make Death Grips’ sound—something at once familiar and strange; alienated and engaging; harsh, unmelodic, distorted, and still completely appreciable—has proven frustrating. One formula we entertained was “imagine Massive Attack had formed at the Smell,” which, while embarrassing, is still better than my (Christopher’s IRL) boss’s take on it (“if Black Flag had been Shabazz Palaces”). The point being: something as singular as The Money Store demands an explanation, and (perhaps due to the era we’re in) we’ve gotten lazy trying to pin it down. To wit: rap rock, the box this band’s been thrown into, even by their admirers. It sort of makes sense, in the way that the band is clearly indebted to particularly shouty hip-hop and the brutal, shaved-head hardcore of early ‘80s Los Angeles. But Death Grips is neither rap nor rock, and the genre tag, as an explainer, is truly impoverished when one is confronted with their music.

While juggling (which might be slightly too mirthful or nimble-handed a verb for what they are doing) several genre aesthetics, Death Grips become inevitably vulnerable to any and all of those genres coming down hard on their heads. Mostly because by those genres’ standards The Money Store isn’t very good. For instance, as a ”rap” album: this album blows as a rap album. Consider the absence of skillful storytelling, the uniformly blunt, shouted-in-unison chant of MC Ride’s lyrics that any sensible human should have no urge to chant along with. (When they are not nonsensical, they are admittedly not very good.) Also, this album does not work as a rock album. Or a dance album. We’ve comprehended the use of “punk,” but we scratch our metaphorical head to find it form-fitting. And yet? We’re compelled.

Vying for rich disambiguation, their lyrics are skewed by a mescaline-drip of dance-like production that strikes not as hip-hop, not as rock, not as dance, but kind of like Baths remixing ‘90s hip -hop with vocals swiped from those “POWERTHIRST” Youtube videos. The quintessential example being in highlight “I’ve Seen Footage,” which lobs cloying gobs of “MANANA” chorus vocals at you from short-range, all over what amusingly, delightfully sounds more like “Push It” than anything we’ve heard short of the actual “Push It.” Coincidentally, we enjoy both “Push It” and watching “POWERTHIRST” Youtube videos, so clearly this is something we are just incapable of not enjoying.

One thing that should be said is that Death Grips’ thrills are entirely temporal. Zach Hill and Andy Morin know their way around Ableton (or Pro-Tools, or a Tascam, or whatever it is), and Stefan Burnett, a.k.a. aforementioned MC Ride, bulldozes his way through the lyric sheet. With relatively similar sentiments to Calum Marsh’s review of Sleigh Bells two summers ago, the result, we find, is a dense and surprising record, but not necessarily a substantive one. The sounds are weird, the words are obscure, but none of these features exist to hide anything: it’s shouting for shouting’s sake and weirdness for weirdness’s. It isn’t a particularly “musical” record, not in the sense that it’s resolutely unmelodic (the synthesizer is typically oscillated so heavily as to be literally tuneless) but because it doesn’t resolve itself; the different elements in the mix often work in spite of rather than in concert with each other. The Money Store isn’t the kind of thing that rewards repeated listening (in the sense that more is revealed as one familiarizes him- or herself with the multiple levels going on), it rewards those listens the same way any disposable, temporary rush rewards the brain. It is nothing more—or less—than just a great, fun record.

So maybe the best way to explain The Money Store is in drug use—and only in the most recreational sense. It’s certainly energetic and counter-intuitive, designed to produce a prolonged whoah moment. But that’s really all. None of that is meant as an insult: Death Grips sound like who they are, a trio of arty, talented kids fascinated by weirdness and living in the twenty-first century—which is to say that instant, visceral, fleeting gratification is their birthright as much as it is ours. They create by using the tried and true synthesis of low and high art, which, y’know, hasn’t steered anyone wrong before. And The Money Store sounds exactly like what it is, which is a noisy, glitchy record made in 2012, at once in tune with the kind of skittish Adult Swim EDM and the 900-or-so great noise band EPs that come out every year. Yet it provides the kind of visceral excitement absent in so many of those other albums. Despite that really, really narrow intent driven with so much hardheaded momentum behind it, its noise is more celebratory than oppressive. If this sounds like fun to you, then it simply and absolutely is.