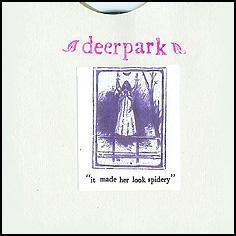 It Made Her Look Spidery

As if Mark Linkous rightfully pissed himself off with his Laurel Canyon involvement, turned recluse, and joined a band of Gypsy buskers somewhere in the Spanish South of France. Deerpark is a Leeds-based sextet of happily sad just-over-student-age people (housecall doctors, teachers, broadcasters, nurses, rehousing officers, and showbiz assistants) who each play some sort of stringed instrument except for the pixie on the flute and the vampire on the flugelhorn. This is not freak folk, although it is eerie: it’s that other kind of eerie, the wandering minstrel ghost with the hooded cloak and curly shoes; a “band” of pariahs who, after surviving their group hanging in the town square, were banished from the kingdom and took to traveling the forests, playing their instruments, surviving off of mushroom tea and licorice root.

And I totally apologize for that. Their website (www.deerparkmusic.com) is cryptic as hell and I had to make some shit up. Deerpark’s last news posting on December 27 riddles: “Some of us have gone into Hibernation until the cold and bad luck have passed… others have not” (“Hibernation” capitalized as if it’s a pub). And it’s signed “Harry." Ok. When you click “about” you get: “deerpark are a group of musicians trying to realize the world of dreams.” Maybe once neo-folk infiltrates pop culture like hip hop did in the early ‘00s (how’s that for a fresh point of reference?) “Realize!” will be the battle cry that replaces “Recognize!” whenever musicians duel. No it won’t, but we’ll still have these densely layered, quivering songs to remind us how pretty one’s spooky dreams can be. I’m having a lot of trouble introducing these guys, aren’t I?

Sips from the cauldron: every baritone string sounds like an abandonned houseboat creeking. Every violin has been lifted from the street performance of a half-blind, lonely seventy year-old retired cognac merchant with one real leg and a bow-tie who misses the smell of his dog and has nothing but a wine bottle opener in his case. They often use the word “whilst." On the creeping “Wolf Song” when Kamran Ali warns, “I like you here, but I’ve demons to fight, so don’t come near me tonight / What a clever thing you are, I see the darkness in your heart,” the room gets a little colder. If the Decemberists set out to purposefully give you gothic visions of figures who taunt from the mist in the woods, they’d be drawn and quartered for emulating Deerpark. Under the website’s “images” link you do indeed get nature shots of brush, undergrowth, rain clouds, a corpse-white skinny dude about to jump into a swimming hole (he’s wearing midnight-black trunks though), and two girls wrestling in a stream in some sort of cultish baptism ritual. Or camp outing.

The problem (if you can call it that): both Jonathan Marshall’s and Kamran Ali’s vocals can lean a little to the flimsy side, and the want left in the wake is punctuated by the too-brief female vocal harmonies that compliment them not nearly enough. Furthermore, the songs all do recall something, indicating that a fully-realized Deerpark sound will have to wait for the upcoming album (if Spidery is an indication, however, the muses have been grinning at the band for a while, so expect the full-length to erode the rough-but-charming sharp edges into brilliantly-refined-and-charming sharp edges). To be clear: Deerpark’s haunting invocation of the darker side of world/cultural music is not in the least a drawback. They replicate a musty, true-ghost-story feel so authentically that they script their own rare caveat: Spidery is 51% uncanny homage to the more macabre world folk cultures and 49% eerie expansion on their inspirations. Tip the balance just a little and you open one of the few musical avenues that’s yet to be explored by modern pop music (Great Big Sea do not count).

To wit: there seems to be no small influence of various types of rootsy anglo-traditional music on Spidery, and with repeated listens you might even hear the whispers of Arabian and other middle-eastern (and even Eastern European) melodies buried below. What never disappoints is the foggy folkloric overtone that wondrously transcends the band’s pop levellings, mystifying the listener despite the slight dilution. “Annabelle’s Mother” features a gorgeous, clumsy banjo that coyly wilts in the face of the tense string arrangements. For all of its longing, “Caravan” is remarkably catchy, and “Circa 85 E” is an absolute must-listen: a lovely piece of kinetic folk (like how Devendra Banhart’s “Fall” just gallops by you), this song builds to a jaw-dropping crescendo with all band members striking a stunning synchronicity (bazouki, flute, and flugelhorn included).

For genre fans It Made Her Look Spidery is recommended. It will also work well for Decemberists fans who find Meloy’s nasal tough to soak up at 1:00 AM, Will Oldham fans all cried out, or those of you who are enchanted by Sufjan Stevens but who prefer other strains of voodoo. For the full length the band is on some “it’ll happen when it happens," which is fine. It took Deerpark’s sound centuries to accumulate in Leeds, we’ll impatiently wait a few more months for it to boil and bubble.

A late addition to Aaron's research on the band revealed the following excerpt from Huckleberry Finn, we think it adds a little more context to this very interesting band...

She was at work on what they said was her greatest picture when she took sick, and every day and every night it was her prayer to be allowed to live till she got it done, but she never got the chance. It was a picture of a young woman in a long white gown, standing on the rail of a bridge all ready to jump off, with her hair all down her back, and looking up to the moon, with the tears running down her face, and she had two arms folded across her breast, and two arms stretched out in front, and two more reaching up towards the moon--and the idea was to see which pair would look best, and then scratch out all the other arms; but, as I was saying, she died before she got her mind made up, and now they kept this picture over the head of the bed in her room, and every time her birthday come they hung flowers on it. Other times it was hid with a little curtain. The young woman in the picture had a kind of a nice sweet face but there was so many arms it made her look too spidery, seemed to me.