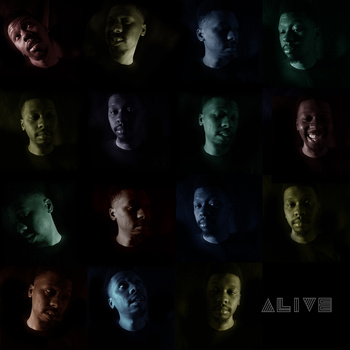 In addition to being an intermittently splendid listen, Def Sound’s Alive serves as further, indisputable evidence that the divide between “mainstream” and “indie” rap—the one disintegrating for the past five years—is virtually non-existent at the tail end of 2010. Because there’s something distinctly earnest about Alive, a heartfelt hip-hop romanticism apparent in the works of Okayplayer darlings like Little Brother and Danny Swain…then you realize dude is more of an Internet-only B.o.B. than anything. Def Sound’s music is a moment of re-realization, like distractedly toying around with Google Earth on your iPhone before—wait, am I holding the Earth in my palm right now? Call it the Post-Fiddy Era: hip-hop can be whatever it wants to be. Indie labels are releasing 808-heavy trap music; majors are backing rap singles with Rivers Cuomo hooks.

Alive begins with an airy, orchestral intro reminiscent of Tribe and ends with a garbage-disposal gunk dubstep remix; Def Sound brilliantly flips a Beach Boys sample in the meantime. He’s an artist with an overstuffed repertoire, allowing each track to function as a mini-brainstorming session. Ideas frequently collide and interlock with each other. On “Trickin.$” he follows Houstonian riding music, illogically, with spacey electronica and catatonic vocals. In his mind, those two styles mesh just fine—and he’s right, sort of. The most jarring aspect of Alive is just how well it coheres. Given the number of genres and subgenres this album incorporates, it’s easy to assume the songs would behave like travelers in an overcrowded subway car, impolitely jostling one another to the point of rib-bruising. Instead, Def owns each experiment, stringing them together with deft pacing and segues.

Reexamining “Trickin.$” reveals Alive‘s most glaring problem: some of this stuff just isn’t very good. While the first two-thirds of “Trickin.$” is steady, confident, sizzurp-sipping fodder, the half-crooned final third is lazy and saccharine. When Alive falters, its faults hinge not upon the myriad ideas Def Sound is intent upon fleshing out, but upon the anorexic frame of some of those ideas. “Up.Is.The.New.Down” is admirably ambitious, but the frantic deliveries employed by Def and guest Novena Carmel (whose verse is pretty awful) lack substance; their flows skim over the top of the track like wafer-thin skipping stones. The infectious slink of “A.Song.Call.ed.Alive!”‘s final minutes is tarnished by vague intonations about smiles or whatever.

Omitting a few missteps, Alive is one of the more vivacious records I have heard this year. There’s a wealth of naive idealism in Def Sound’s music—he speaks frequently of magic and love—and it often manifests itself in ingratiating ways. “Captur.ed.Laugh.ter” features belly laughs over a steady acoustic guitar and some chimes. It’s strangely cathartic, reminiscent of The Books; it’s also something one doesn’t frequently find on a rap record. Nor does one usually hear Songs: Ohia-lite: on “End?of.The.World!”, his verse serves as the track’s highlight as he provides a crucial buoyancy to a propulsive, but ultimately uninspired, folk-rock track. Alive is rife with this ambitious variety and, to Def’s credit, he acquits himself well over this strange bouquet of tracks, displaying a malleability as an MC that helps the project cohere.

While there’s a lot of good stuff here, Def manages to produce one singular jam, “$.Times.Girls,” which adorns a fat guitar riff with distorted, smoldering synths. The hook invokes the tossed-off cries of indie rock anthems (“We don’t want your money / We just want your time!”). Def Sound would like to change the world, but he’d settle for a drink. That sentiment sums up Alive well enough; it wants to be a genre-shattering cataclysm, but it’s actually just a dependably enjoyable rap record with an overactive imagination.

In a zealous description of Alive, Def Sound writes that this album is the product of “[his] first year of fully dedicating [his] life to art.” Seems about right. Alive sounds like the brainchild of an artist who wants to make capital “A” Art. And while his sophomore effort doesn’t reach such Olympian heights, watching Def Sound’s ascent is still pretty engrossing.