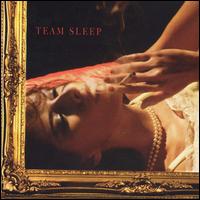 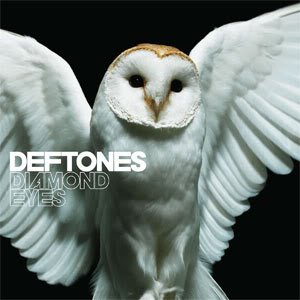 Yeah. Really. After spending the last decade fumbling over a vaguely artsy alt-metal niche, one comfortably honed on Around the Fur (1997) and White Pony (2000), Deftones return with a record worth giving a shit about the whole way through. I won’t go quite as far as to suggest it’s the “something great” Clay doubted them capable of in his Saturday Night Wrist (2006) review (though: I do think White Pony clawed and cooed its way there), but in brazenly retreading all that’s genuinely remarkable about the old Deftones, tweaked just enough to feel vital again, Diamond Eyes comes tantalizingly close. My teenage self—that awkward shithead squawking out the “My Own Summer (Shove It)” riff on the saddest of Strats for the entire summer of ’97, who wouldn’t even muster a teenager-ly shrug at their last two records—couldn’t be more tickled.

These eleven songs don’t quite reach the heights of White Pony‘s cocksure art- and chill-metal aspirations, or even Around the Fur‘s less refined aggression, but they do find a wildly enjoyable middle ground. A middle ground that, I’ll stress, has been hard earned for the band in the 2000s. In hindsight it’s hard to not see 2001’s “Back to School (Mini Maggit)” as the major turning point: a confused cash-grab of a single from a band that, fresh on the heels of making their strongest record, just couldn’t reconcile where to go next. The single, unfortunately, was a huge step backward toward their rap-rock roots—toward that shit-collective of nu-metalers they were once tragically grouped with thanks to a) their hamfisted debut, Adrenaline (1995), and b) a slew of Chino Moreno cameos with the likes of Korn, Sevendust, and Soulfly, which only served to align Deftones with boneheaded bands they’d already left dusted post-“7 Words.” Let’s be thankful Chino at least had the sense not to get in on the Pet Sounds (1966) of douchechillery, “All in the Family.”

Releasing “Back to School” as a single, and even moreso as the tacked-on opening track for newer copies of White Pony (ouch), was a fuck-up immediately acknowledged by the band (said Chino: “Fuck! We just totally compromised”) as a back-fired attempt to show their label they could easily toss-off a hit by, um, “doing some hip-hop rap” about high school, from atop school desks in the video no less. The cave-in to label pressure further derailed the considerable momentum they’d built from the mid-late ’90s onward; tellingly, their next record, Deftones (2003), in turn felt too eager to expand their darker, “experimental” side while also returning to their rawest, least-commercial roots. Different paths attempting in their own anti-“Back to School” ways to reestablish Deftones as a band no longer willing to pander to a rap-rock audience they outgrew, a band able to learn from their mistakes and start anew—reflected by the choice to self-title instead of sticking with the original name, Lovers.

I won’t rag on that album again, but Diamond Eyes reinforces how they sorely jumped the gun on that decision. It’s here, seven years on, the band is finally able to focus their long-defined strengths and deliver a worthy follow-up to White Pony. Their last two efforts were more like a reset than an evolution, enjoyable but hardly satiating, spinning wheels that relied too heavily on Pro Tools to make up for the lack of songs. Sure, Diamond Eyes incorporates all the same basic tropes as every Deftones record before and almost certainly after it, but here, for the first time in ages, they’re crafted and performed with more than mere hints of the assuredness and pummeling hooks of their one (yes) great record—a full-course meal to the last decade’s worth of scattered crumbs. In other words: more of the type of songs Deftones so thoroughly kill, like “Hexagram” and “Around the Fur” and “Cherry Waves,” way less aimless stoner-baiting horseshit.

A big part of this return to form—as results suggest, anyway—is the record’s short gestation period. Following bassist Chi Cheng’s car accident in 2008, the band decided to shelve their almost finished other full-length Eros. In its place, with Quicksand bassist Sergio Vega filling in for Cheng, Diamond Eyes was written and recorded in a taught six months with producer Nick Rasculinecz, who sagely moved the band away from Pro Tools completely. This approach meant the band didn’t have time to overthink things, to rely on style-heavy tangents that put too much weight on Chino—a trap that only the plodding “Sextape” falls into here. Its Modern Rock radio vibe (frankly, it’s a shitty producer and “I Don’t Want to Miss a Thing” string arrangement away from Daughtry Country) is put to much better use on “976-EVIL” just two tracks later; ignoring that Chino is mixed to sound like the Linkin Park guy in the chorus, those breezy, downright affable verses make it an obvious choice for next single, perfectly sequenced between the dense MBV-loving haze of “Risk” and closer “This Place is Death.” (Looks like Chino was a Lost fan; look forward to the next album’s “Ah Fuck, I Knew I Should’ve Dropped Out After Season 4.”)

Though all of these songs dabble, “Royal” and “Prince” most blatantly retread the White Pony aesthetic. The former flat-out lifts the chorus of “Korea,” but that closing section, where they give in to the momentum of guitarist Stephen Carpenter’s riffing and Chino loses his shit, is Deftones at their most scorching. The latter, an uncanny remake of “Rx Queen,” is even more obvious with its recycling, but god damn that tremendous bridge—seismic note bends crashing down like gigantic chainsaws as Chino, panicked, screams—is worth the nagging deja vu. Elsewhere, the title track borrows equally from previous singles “Change” and “Minerva,” triumphant in exactly the same ways: heavy yet insidiously catchy, the breathy melodic lift of the vocals balanced by immense swells of coruscating, thick-textured guitar. Even better is the way those cathartic “WOO!“s in “Rocket Skates” whiplash into the jerking tension of its chorus, the entire band forcefully milking the transition between in-the-moment aggression (“GUNS! / RAZORS! / KNIVES!”) and, as Chino narratively pulls back, familiar goth imagery (“You’re red, soaking wet / I’m right next to you”). Best of all? Only Adrenaline throwback “Cmnd/Ctrl” toes the waters of their earliest fleeting Durstian FUCK YEAH LET’S BREAK SHIT WHY NOT YOUR FACE!-isms. Thankfully “You’ve Seen the Butcher” is waiting on the other side with hints of A Perfect Circle’s “Judith”—and, for that matter, Maynard’s White Pony-topping collab track “Passenger”—lingering heavily in the mix.

So: yeah. Really. This, again, finally, is the Deftones I used to love. Though in essence a rushed replacement for and direct reaction to the purportedly darker, more textured Eros, Diamond Eyes is in no way a toss-off to buy more time for a “real” record—nor is it an ill-advised label compromise a la “Back to School,” or even calculated nostalgia meant to land them on…I don’t know—does Warped Tour still exist? Somehow, while their former peers are either mercifully defunct or off attaching themselves to another era’s most awful rap-rock (yup, that’s Korn’s Jon Davis in Weezy’s “Prom Queen” video; go figure), Deftones have exited years upon years of growing pains with their shit together long enough to knock out some of their most immediate and satisfying music yet. If only all bands could learn so much from their mistakes…eventually.