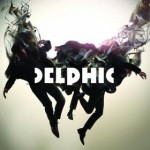 Delphic is the latest in a long line of Manchester-based bands to fuse its city’s two great musical loves: anthemic Brit-rock and hedonistic electronic beats. It’s not initially a promising region or crowd for a band to stand out from, but Delphic’s rise seems to have been more meteoric than most. A year ago nobody was talking about them; now, after an incredibly successful summer tour supporting Orbital and playing the festival circuit, the band has watched its debut album Acolyte get licensed to Polydor, its release met by coverage from the major UK press and replete with prime-time advertising runs.

Playing to a broad demographic that ranged from greying ex-ravers to fresh-faced students, almost all of whom were already euphoric at the unexpected prospect of hearing Orbital again (and almost all of whom were ideally poised on the musical axis to appreciate Mancunian dance-rock), supporting Orbital was ideal for Delphic. Now a look on Last.fm shows the band’s scrobbled in equal measure by the kind of guys who spend their days hunting down old 808 State 12“s and by my kid brother who has Enter Shikari and the Horrors as his most-played bands. When you consider that kind of wide appeal, their rapid ascent starts to make sense.

The pool of reference points shouldn’t need spelling out, so it’s just a case of specifying exactly from which Manchester dance-rock acts the band’s taking the most. Think more New Order’s earnest vocal delivery and less of Happy Mondays’ leering swagger; more of the airy textures of any Chemical Brothers collab and less early Kasabian. And, oh, it’s mandatory to compare Delphic to the Klaxons, so: they sound a bit like the Klaxons. The formula is familiar, these soaring choruses, stadium-sized hooks, and propulsive, indie-friendly beats wrapped up in washes of synth pads and arpeggios; this is one of those albums you know almost before you’ve heard it. Go check out their first single “Counterpoint” and you’ll probably be able to guess how the whole album will unfold.

This is not to say Acolyte is a bad album, it’s just retreading such well-worn steps that it’s going to take an absolutely superhuman effort from the band to get out of that mid-‘70s scoring bracket (see, literally, above) highly satisfying but unadventurous albums routinely occupy. And if anything makes that effort a viable reality to look forward to, it’s the presence of producer Ewan Pearson, who nudges Delphic’s sound towards the kind of dense, skyscraping electronics he helped Anthony Gonzalez realize on M83’s Saturdays = Youth (2008).

Towards the end of Acolyte there is a peak of three consecutive tracks that pluck widescreen ecstasy-rush moments from the dance music canon and use them as a launch pad into the stratosphere. First is “Halcyon,” with its obvious titular reference to tour-mentors Orbital’s 1993 classic, then “Submission,” which craftily reinvents the opening of the K-Klass remix of New Order’s “Ruined in A Day,” and finally “Counterpoint,” built around a dizzying chord progression that comes straight out of a Sasha epic house selection from 1995. It is during this fifteen-minute stretch that the album transcends its familiar, blokey, mad-for-it Mancunian template and, though you’ve heard all these tricks before, achieves something charming, familiar, fucking good—and this is the level on which Delphic needs to operate more often if they’re going to wring a lasting impression from this sound.