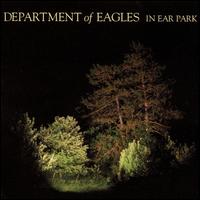 Where their stylistic differences beg a disconnect, I think it’s appropriate that Grizzly Bear guitarist Daniel Rossen’s Department of Eagles and TV on the Radio should release new albums so close to one another. In many ways the two represent both what’s best and worst, respectively, about the bands who enjoy temporary purview from the summit of the indie heap. You’re right in noticing that I’m not making any distinction between Department of Eagles and Grizzly Bear here. In Ear Park is as much an argument that the distinction is finally semantic as you’re likely to encounter. This Grizzly Bear-lite effort is a serviceable stand in while we wait for the follow up to the gargantuan Yellow House (2006). More on that later.

DOE and TVOTR are Brooklynites approaching the elusive core of that city’s scenester quintessence with paradigmatic dualism: Clay’s review of the TVOTR rightly identified their contrived quasi-obsession with having a futuresound, being “next,” while submitting themselves to a bland aesthetic universality that allows critics and fans to praise their capital-R relevance without transcending the fickle customs of cool. Where Grizzly Bear feeds on the same subsistence, they approach it with a much fuller understanding of resonance and rock history. Yellow House‘s greatest strength and most knowing move was to sound like any number of canonical rock albums reconstituted with fresh melodies and better lyrics. Grizzly Bear seem to get the joke that goes soaring over TVOTR’s heads: in distancing themselves from the contemporary mores of style they not only increase their lasting power but also still get to be the most fashionable band in indie for a while—to get up on stage with Girl Talk and clap along with Feist on Letterman. Just ask Broken Social Scene: ours is a fickle demographic.

In Ear Park sounds so much like Grizzly Bear that it’s difficult to recognize, at first, that it does occasionally retain the bedroom DIY aesthetic for which Department of Eagles are known, especially in the sense of its canned percussion, and at the album’s best it keeps the music attempting the scope and lushness of Grizzly Bear. In almost every other measureable sense this is the full formed album that Whitey and the Moon UK (2003) had no interest in being because it was, by nature, stitched together from briefly visited efforts. Unfortunately, in widening its span it also cannot measure up next to its most obvious comparable. Like Thom Yorke’s middling, uninteresting The Eraser (2006), one can’t help but wonder why an artist who counts themselves among a group of such talented and inspired musicians would not explode the primacy for these ideas via their primary outlet. Good as the songs there are, Whitey and the Moon UK fostered no obligations or expectations, and had the sense of laptop pastiche. In Ear Park sounds duty-bound pay tribute to Rossen’s bigger picture band.

What In Ear Park does is assert the essential nature of Drossen’s guitar to Grizzly Bear’s grand echo; Yellow House works with space and texture in a way that earlier remixes tried (with varying degrees of success) to capitalize on, and the presence of that same essential formula here speaks to the clear definition of Drossen’s songwriter character. The delicate tinkle of the title track and three note pomp that open “No One Does It Like You” are laid barer than one would expect, but the quality of the ideas are evident. Rossen’s vocals are also masterfully easy and, on tracks like the playful “Teenagers,” are confident in its shift to a cabaret shuffle. I’d have liked to see the dabble of “Therapy Car Noise,” a short excursion into ambient noise, explored further and the pristine façade of Rossen’s mainstream song writing roughed up a little.

Yet to be mentioned thus far is the group’s second half, Fred Nicolaus, and that in itself should say something about the degree to which Department of Eagles no longer sounds like the group that made Whitey and the Moon UK but has shifted its focus to Rossen’s more delicate sounds. True that there’s the hard slap of the percussion on “No One Does It Like You,” but that’s an exception; for the most part, even the accompaniment to these changed songs takes on the tenor of aware production and organic instrumentation where this duo was once known for the slickly constructed recombinative song writing one might associate with Menomena.

When Yellow House was released I wrote here about its knowing subjugation to the kinds of aesthetics that vein the subterranean levels beneath fads. Similarly, In Ear Park is to Whitey and the Moon UK as Yellow House is to Horn of Plenty (2004). There is such a disconnect between the current albums and their precedents that it can be difficult to see where the ideas gestated. Evolutionary music is the status-quo, the narrative we map over discographies, but where this gets confused is why a direction that was already accounted for was chosen for the project. There were those of us, after all, who liked that Department of Eagles were doing as a separate and legitimate concept.