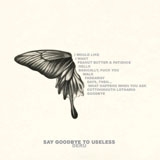 Interesting that in the same year Flying Lotus drops the monumental, destined-to-be-classic, genre-expanding juggernaut Cosmogramma Deru releases such an affirmation of the genre’s pleasure principles. Say Goodbye to Useless, Benjamin Wynn’s third album under the name Deru, seems willfully anachronistic, an album that owes its existence to the turntableists of the early electronic era—more a baby Endtroducing (1996) than deriving from, say, Squarepusher or Aphex Twin’s confrontational asymmetry. Where Flylo crams every last possible influence, every speck of euphoria into his monumental and monumentally disorienting piece, Wynn keeps his style basic and bare. Simple clean arrangements, atmospheric vocal samples, and chunky drum and bass; this workmanlike and substantial record hums unobtrusive on the sidelines and in the background.

A little has been made of Wynn’s work on commercial soundtracks—Nike spots and cartoons, for example—and his ability to make music to exist amid the busily visual is not hard to imagine. Say Goodbye to Useless is finely scoped and complimentary, unfussy and requiring little to enjoy. As much about spaces as Flylo is about suffocation. It doesn’t seem driven by inescapable providence, as is so much writerly (romantic, even) IDM—their need to carve out an obsessive compulsive sketch of the world in minute fractions and intense detail. What it seems after, rather, is what the piano strikes at the beginning “Building Steam with a Grain of Salt” seemed after: the stripped essence of something, naked and exposed, isolated and forlorn. Big picture electronica that skips over glassed surfaces like the plethora of chill-out mixes to come before it.

And the record succeeds just for those reasons, at least for the most part. The ghostly interlude of “I Would Like” and slinking funk of “I Want,” like nebulous codas for a purposefully peripheral record; the timorous gaze of and emerging-from-ambience “Walk”; and the drugged-out thrust of “Cottonmouth Lothario” seem to materialize effortlessly from focus and direction. Keeping it as simple, stupid, as the groove and waxing meaninglessly philosophical. I can think of worse things than a nostalgic return to the big-beat and hip-hop of late ’90s/early 2000s atmospherics.

I can also think of a great many things more influential than what amounts to a slightly cooler Buddha Bar record released in 2010. It may not have been Wynn’s intentions to make a tribute album to a stylistic signpost, but that’s inevitably what Say Goodbye to Useless ended up sounding like. It’s accessible and effortlessly listenable, but that’s all it seems designed to be. Where I’ll probably have a summer’s worth of contentious listening with Cosmogramma—like a destructive relationship, like a car accident that leads you to religion, like the transformative trauma really great music sometimes feels like—I can only imagine putting Say Goodbye to Useless on after a stressful day at work. Nothing terribly wrong with that, but which of the two albums do you think I’m more likely to be listening to, puzzling over, talking about in summer 2011?