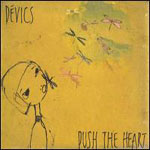 Devics are the kind of band who the All Music Guide would probably refer to as “wistful, somber, autumnal.” It’d be an apt description, if an incomplete one. Push The Heart is equal parts Mazzy Star and early Radiohead, with a bit of Mercury Rev thrown in for good measure. Aside from a slight misstep, it’s an album that begins to be worthy of those influences.

The disc opens with tinkling pianos surreptitiously tip-toeing down a stairwell behind guitars and unidentified gauzy warblings, with primary vocalist Sara Lov bending notes in a way immediately recalling Mazzy Star’s Hope Sandoval. Lov isn’t the only singer, as guitarist/keyboardist Dustin O’Halloran takes on the duties on two tracks with a decidedly less wistful sensibility. His songs are simpler and more grounded, providing some balance to the often airy tunes.

As the album unfolds, the Radiohead influence reveals itself in a pair of tracks at the record’s center. The unpleasantly unmelodic “Nice Dream”-lite of “Distant Radio” is the album’s only real weak song, but “Just One Breath” borrows from Thom and Johnny with much greater effect. The stark electric guitars channel Kid A's “Optimistic” while Lov’s voice turns from plaintive to steely. It’s by far the heaviest moment on Push The Heart, but the intensity showcased feels out of place when the somber remaining tracks fail to match it.

“A Secret Message to You” may be the album’s most sonically interesting track, relying on an organ and typewriter percussion to back Lov’s dulcet tones--like The Blue Notebooks with a singer. It’s a shame the band doesn’t explore avenues like this more fully, as the songs built on guitars and atmospherics tend to blend together without repeated listens. Still, many of them are full of autumnal beauty. Often it’s the lyrics that stand out from the similar production: “City Lights” offers a moving performance from Lov: “Here, here, let’s just stay here,” she repeats, trying to hold on to a fleeting relationship. “Lie To Me” turns another plea into something more cutting, asking for a false admission of feelings through sex rather than words with the lines “Lie to me / make like you love me.”

All in all, Push The Heart is an admirable, sometimes striking record from a band with a few of those now in their catalog. If Devics can push their sound a little further next time, they may have a classic on their hands.