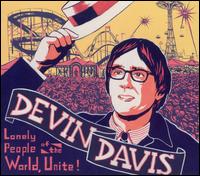 Lonely People of the World, Unite!

You know the type:

Slouching in with a forlorn glance at the world, reeking of an acute resignation so profound that his presence transforms his every location into an Ed Hopper tableau. Wandering into a gas station at 11:40 at night, tie loosened after a night of serving seafood, eyes glazed, blearily buying a lighter and a microwaveable burrito. Sitting bored at a deli for a late lunch. Driving through the sleet unblinking, shoveling laundry from washer to cart, renting a DVD. Sleepwalking, staring, mowing the lawn — always alone.

This guy has an anthem, whether he knows it or not. Eleven anthems, in fact, thanks to some guy from Chi-town (via Florida) named Devin Davis who has single-handedly written, recorded, performed and produced a debut album--Lonely People of the World, Unite!--of almost unprecedented quality and depth of thought. Think Pinkerton without the pain, or Funeral if it was about loneliness instead of loss. Davis crams enough reckless enthusiasm, pop smarts, and shit-hot Bowie rock’n’roll into Unite's 36 minute runtime to make Augie March look like a jam band.

Unite dwells in that first album twilight that actually makes you physically, tangibly excited about what a given artist might be able to accomplish. Remember Turn on the Bright Lights, Is This It, Original Pirate Material? Remember the last time you had to play an album for all of your friends? And remember how if they didn’t like it you didn’t want to be friends with them anymore? This is that album, fresh out of nowhere for the year 2005. You’re welcome.

“Iron Woman” is an unfailingly great first track, a searing, air in the hair slammer with a chorus like a steel trap; it’s two perfect minutes, easily as good an opener as “Le Garage” or “Caring is Creepy.” “Turtle and the Flightless Bird” is a fable of genuinely touching earnestness, anchored by the type of drunken shout-along chorus that makes you nostalgic for the absolute present, for the moment you’re listening to the song. The Counting Crows have been trying to hit this note for like a decade now, and Davis perfects it on his first try.

This isn’t the only time Davis does this trick. “Moon Over Shark City” starts on the riff that the Kings of Leon have been grasping for for two albums, and it bursts into a coke-binge freak-out chorus that the Mooney Suzuki only achieves live. “Transcendental Sports Anthem” has more cock-rock megaphone bombast than anything on Permission To Land. The brothers Gallagher will kill each other before they write a ballad like “Sandie.” But while Davis is destroying the competition, he’s also paying homage to the Untouchables: before it becomes a New York Dolls freak-out, “Paratrooper with Amnesia” is a maudlin ragtime crooner, and a deadringer for White Album-era McCartney.

And there’s really no precedent for “Cannons At The Courthouse”, which goes from rainy, gorgeous Blonde on Blonde patter to fuzzed-out Neutral Milk Hotel bliss rawk and (heart-breakingly) back before melting in a vintage psych-rock haze. Ditto for the phenomenal “Giant Spiders”, the album’s centerpiece (craftily buried near the end), built around a Pete Townshend head-smasher of a riff. This song finally seizes a mood hinted at earlier on the album, a mood so emotionally complex as to be unnamed; how’s “bonecrushingly hopeful yet resigned” sound?

I’m running out of superlatives, adjectives and interesting comparisons at this point, and you’re running out of patience for my boundless enthusiasm, but that’s okay: in the end this album is reminiscent of only itself, a conceptual masterstroke (yes, I said "masterstroke") of absurd listenability and intellectual captivation. Davis’ surreal lyrics stand with one foot in the grippingly real (“Man, I don’t ever want to move back here again”) and the other firmly planted in the absurd: I’ll let the line “What happened to the rhino I know?” speak for itself.

He’s at his best when these two worlds collide, like when a forlorn protagonist looks up in “Transcendental Sports Anthem” and sees “the flocks of boy bands flying by, headed down south to Orlando for the winter.” The album’s predominant theme presents itself at an almost subconscious level, a patchwork of odd adjectives and half-dreamed fragments that ultimately forms a sad vignette, an intentionally unfunny joke told by a very lonely person. (I mean, he was writing songs this good and he still had to play all the instruments himself?)

But the music tells a different story altogether, one of a newfound, hard-won hope. That exclamation point in the title is there for a reason, and when you listen to this album you’ll know why. It would be a shame for it to slip through the cracks, because to some ears it’s an early contender for year-end glory, and, hell, who knows how long it may hold up after that. And so what if that first paragraph was culled from the last two months of my life; this album’s personal relevance to me is the sole seed of doubt causing me not to rate this album as highly as every cell in my brain screams for me to. But you didn’t have to watch someone die to love Funeral. Unite! is a rallying cry, and Davis performs like his life depended on it. In a way, it probably did.