1. I Cried Like a Silly Boy 2. Curse Your Little Heart 3. The Last Beat of My Heart 4. Somethin’ Stupid 5. Venus in Furs 6. El Zopilote Mojado

Other Records by DeVotchKa 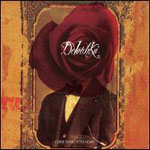 I have a friend who likes the idea of writing because writers get to make up new words. Here’s something he yells while drunk: “Milton invented pandemonium!” Miguel, this one is for you: devotchka (lower-case d, no weird capitalization in the middle of the word) is what you call the premise for the Tom Hanks joint Big. I mean, specifically. Devotchka in the first degree is what happens when you walk up to a creepy-ass booth featuring an animatronic gypsy who makes your deepest fantasies come true, and then you wake up with pubes and end up jumping on a giant piano with an old man. Thankfully, there is also devotchka in the second degree, which is when something surprising, strange, and delightful happens. The possibility for common usage abounds: you walk down the street, bend over to tie your shoes, and find a winning lottery ticket--devotchka! The man at the ice cream counter gives you an extra scoop for free--devotchka! See? It’s pleasant and fun. Somebody get the OED on the phone.

I propose this new entry into the lexicon because this is precisely my experience with the band DeVotchKa (the pleasant experience part, not the gypsy/pube thing). When I saw How It Ends in the $5 bin, I scooped it up and headed home only to have my chest cavity sawed open by the haunting vocals, violins, accordion, and bilingualism. If you read this website, you (hopefully) know the feeling when a band just floors you--like, say, Sunset Rubdown is going to next week or Danielson is right now, assuming you like squealing maritime folk-metal. And remember what that moment of revelation’s called? Devotchka! See, we’re having fun.

The proper follow-up to How It Ends is still a ways away, so, uh, keep holding your breath. For now, nearly two years after that release (which was technically the band’s third) we get Curse Your Little Heart, a stopgap covers EP. DeVotchKa’s no Chan Marshall, and Curse’s no Covers Record, but this EP still has its moments. The first song pulls double duty as kick-ass opener and indie-cred builder. My internet research tells me that Baldo Rex was a folk/punk (?) outfit that spent time in Boston, San Francisco, and Boulder, which is where I imagine they crossed paths with fellow Boulderites DeVotchKa. Their “I Cried Like a Silly Boy” gets Devotchka’s super-Hawaiian treatment, with a dripping “Mele Kalikimaka” sound and a smooth, subdued vocal performance from Nick Urata. The title track and lone original comes up next, and, well, it would have made a solid b-side from How it Ends. Sung mostly in Spanish, it is carried along by a brisk rhythm section, featuring a quick and simple upright bass line, maracas, woodblocks, and cymbals. But even this relatively uneventful track shows that DeVotchKa’s work with film scores has honed their already impressive ability to evoke emotion from even their middle-of-the-road tracks--the track begs for candlelit dance intercut with a tongue-in-cheek chase scene, the hapless professor protagonist running scared through the hallways.

“The Last Beat of My Heart,” their foray into the Siouxsie and the Banshees catalogue, is a sighing, sobbing success: Urata bleats over insistent, stately acoustic guitars, fighting against a tuba’s undertow and a viola’s operatic heft. This track almost compensates for the completely stupid “Something Stupid.” But the kicker here is the “are you sure you want to do this?” entry of Velvet Underground’s “Venus in Furs.” In a way the match was made in heaven; how many rock songs had a controversial viola part? DeVotchKa replace the original’s drone with an accomplished sense of dynamism: the song seethes with energy, simultaneously tense and explosive, giving and taking exhaustlessly. Urata’s wholly incomprehensible vocal performance nails the track to the wall, and when the violas finally do circle in, writhing and abrasive, the EP reaches its unlikely climax. In a word, devotchka.