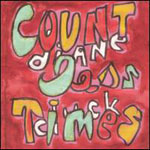 Maybe it was mcenroe, I can’t remember. Someone e-mail me and straighten me out. But whoever it was said he learned to make beats by using the REC features on two “ghetto blasters” (yes, bring that back) set up opposite one another. He’d record a break onto one, using the pause button to stop the tape at the end of the loop, pulling the record back again, and then unpausing to record the next howeversomany bars for the next loop. A break is what – 5 seconds? So do that about 42 times and you’ve got your drums for your rap song. No problem.

Next he’d replay the break tape into the second ghetto blaster, which would simultaneously record both that and scratched-in melodies or basslines from the record player. That tape would then be used as the “master,” played back into the first ghetto blaster again, now with drums and bassline, and then (we’ll call him mcenroe, because I know he did start out with pause button beats) mcenroe would scratch in, say, a cymbal crash or a guitar lick or horns or whatever. All of this was recorded open-air, the final, completed “master” thereby being a 4th or 5th generation dub even before vocals were added. Hardcore.

“Yo, Newell, what’s lo-fi Winnipeg rap got to do with acoustic folk from NY?” Glad I asked. Most, maybe all of Diane Cluck’s Countless Times was recorded into something open-air, maybe next to her apartment window, maybe live, maybe both. The album is stark, mostly just her and her acoustic guitar. Fingers slipping on strings are often as foreground as her careful, cutely clumsy picking. On “Wasn’t I Glad!” there are kids shouting at each other far in the background, while at a couple of different intervals you can hear a car driving on a wet street. If this were a rap record, you would praise the producer for his “use of atmospherics.” Here it’s just hybridized “field recording,” but gripping because of the overall immediacy of the presentation, you get more of a sense that Cluck could be making it up as she goes along, that the song is more “captured moment” than “recording.” All it is is a sweet, soft melody and the words “Moving on down the road / wasn’t I glad to see you” repeated. And for all the captured present-tense, Cluck never seems totally “there,” singing with pregnant pauses, as if her memory’s becoming more and more refreshed about something long-gone as the meditative piece progresses. If you like to psychoanalyze your listening, Countless Times is a bottomless pit.

And the harmonies. Earlier this year we posted Cluck’s stunning “Easy to be Around” for download in a song review. I will argue that in its abstract expressionism (thanks Amir), and irresistible multi-tracked song-long harmonies, that song is perfect (see for yourself). It’s therefore also impossible to top, says Plato. But on Countless Times she comes close twice. And both are made even more intriguing since we now have an idea about how she achieves her layered vocals.

Exhibit 1 is “Love Me If You Do,” which lists off all the types of ‘friends’ that Cluck asks to love her, which is obviously on some figurative hippie shit (unlike Banhart’s last record, which is hopefully on some figurative hippie shit), but even that can be sold on the strength of Cluck’s knack for melody and harmony. It’s haunting, arresting, and is only topped by “United. The Way You Were,” which itself is obviously on some hippie anti-war shit about reds and blues, borderline presaging some sort of ideological civil war, which is exactly the type of intelligent and insightful protest song that’s still palatable after, say, Living Things have got to burning Bush photos on stage. “United” showcases how Cluck uses her harmonies to create a steady lead vocal core to an intense, meaningful song, and then builds her layers on top of it, some of which sound slightly more pained, some slightly more tired, some slightly more aggravated and focused. The cumulative, resulting “voice” therefore teases apart the multifarious complexity of her subject matter. So, ok, fuck it. This is perfect, too.

Which it better be, though, because sometimes Cluck comes off like the Blair Witch. See “My Teacher Died / Countless Times,” where, over a tape loop of herself eerily and repeatedly harmonizing the words “countless times,” she sings “there’s a knot at the back of your neck / and a lump at the top of your spine / it’s what you get when you keep saying no no no / but it’s not meaning yes all the time / love your yes and no / you wait too long.” As she’s doing so, you can hear her run around the room, picking things up, pressing play/record, swallowing. There’s some especially-odd thudding, and then you realize that she was picking up an accordion, which then weeps out a compliment to the harmonies, which begin to incorporate additional, staggered Cluck voices into, over, and in complete ignorance of the central harmony. A couple of clicking sounds pop into the mix, everything dies out, and the accordion plays again. You can’t tell what’s looped, whether she has eight arms, or if there’s a ghost in the room. And when she gets back to her own singing on-spec, and her repetition of the panicked lyrics “Since my teacher died / am I a student now? / of what I cannot tell / of whom I cannot tell,” you’re pretty sure that she’s sitting in a rocking chair. The whole thing is a little too messy, too perverse, and too eerie, especially when, in the distant background, it sounds like there’s intense knocking on her door as the song fades out.

But then she 180’s and turns those same lines into the most beautiful non-harmonized piece on the record, highlighting the fact that she was just toying with us, good cop/bad copping herself into and back out of our nightmares. Over a guitar played like a plucked harp, Cluck eases us back, tactfully framing that feeling you got when The Dismemberment Plan broke up (I was going to say Whiskeytown, but I’m scared of Greenwald):

I read his books for years
I’ve gone all through them, how
I wanted one last fix
But he’s not writing now
My teacher died
I was sorry, but I wasn’t sorry

There are no superstars
There is no superman
There’s only everyone
I learn from whom I can
My teacher died
I was sorry, but I wasn’t sorry

She screws up the “I learn from whom I can” line, stops, laughs at herself, keeps going. It’s great.

So yeah. I’ll admit it, I’m a fan. Cluck’s songs are not-obviously-indulgent journal entries written in the same vague, pregnant symbolism that Thom Yorke fans have been relating to for a decade without knowing shit about what he means (also while vehemently arguing the contrary). Her voice gets harsh and a little yelpy when it needs to, but generally charms its way in and out of the meditative acoustic melodies that back it. Through intensive googling, I could not discover whether Spencer Krug had a long-lost, bookish twin sister in New York, but let’s get duet anyway, can we guys? I can’t wait to hear what happens when she moves up to a four-track.