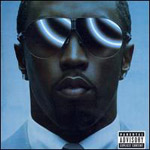 What gives? I hear you. Yeah, Diddly’s too easy a target. Yeah, maybe. No one’s expecting the Glow to get behind this guy. Or I sure hope no one’s expecting that. But how easy of a target is Diddy, really? I don’t know, I found it a little perturbing when All Hip Hop previewed Press Play pretty positively, when Pitchfork gave Monch-muncher “The Future” a pass, when Allmusic dropped four stars and acted all surprised that the thing’s got hooks. Of course it’s got hooks; Diddy’s made $364 million off selling people shit they don’t want; he’ll buy five hooks off Jay-Z and maybe one or two off 50 Cent if he has to. Did I call the somewhat favorable press “perturbing”? Sorry, scratch that, it’s horrifying. Halloween came early for Betz this year. Damn, guys, “Testimonial” reminds me of Sparkle Motion. Shiver.

Even middling reviews like The Guardian’s laud Diddy for the high caliber of his collaborators. Well, I mean, how impressive is it for a man with limitless resources to secure help from people like Timbaland and Kanye West, cats who even my 10 year-old sister could tell you you’d might want on your big hip-hop comeback, stab-at-relevance record? Good work, Puff, let me know how that new Lemony Snicket is. Pharrell has one on here, too. Word, same dude that produced that hot new Robin Thicke jam. “Everything I Love” has a beat by Kanye, a hook by Cee-Lo, and a verse by Nas--that says everything of Diddy’s checkbook, and absolutely nothing of his taste. And let’s not pretend that Diddy’s pushing anyone here for their A-games, because if “Diddy Rock” is Timbaland’s A-game, I don’t want to be Timbo’s friend (read: fanboy) any more. It begins with a poor imitation of the “My Love” synth swooping, a simplistic key line, and a chorus that includes this jewel: “Baby, let me be your tour guide / I’m your burger, you’re my fries.” Seriously, you’ll get anxious for Diddy to start his verse and, in retrospect, you’ll naturally hate yourself for that.

Okay, credit needs credit. The Pharoahe Monch ghostwriting came from so far out of left field Manny Ramirez must have thrown it in. Interlude “I Am” provides the subject to the “The Future,” nominal predicative, wherein Mobb Deep’s Havoc cuts barks and sinister bass straight from some Stress (1994) cloth and Monch’s words come out of Diddy’s mouth, which does its damned best to bite the Pharoahe’s incendiary, singular flow. So, now for the credit: thanks, Havoc and Pharoahe, you made a song that reminds me of how much I love Organized Konfusion. I guess because the Fork dealt with this song as a solitary track review, stripped of full album context, three stars should be understandable. I, however, am faced by Diddy declaring that he is, in fact, “The Future” of this rap game on an interminable guest-fest record with a first single featuring the Pussycat Dolls’ Estefan-alike. To further reiterate: a multimillionaire media mogul claims Clipse cred while putting on a three-ring, big-show endurance test that concludes with a six-song suite of Diddy’s trademark soft-focus balladeering, except, like everything Diddy’s ever done, the trademark belongs to someone or something else--in this case LL Cool J’s “I Need Love.” Thus, Diddy’s narcissistic prognostication on “The Future” can be taken one of two ways: (1) some fucking funny shit, or (2) some scary-ass Nostradamus shit. Either way, I’m 100% on it being some shit.

The driving point here is that we shouldn’t be giving Press Play even just an “okay” or “one thumb up” or “3 out of 5” or “surprisingly not wretched” or “I love Timbaland.” Granted, thanks to the kind of company Mr. Combs’ platinum chain reels in, almost half of these tracks have some modest amount of entertainment value to them, but all the Just Blazes and Rich Harrisons and Big Bois and Pharoahes and Kanyes and Nasirs in the world can’t cover the Proactiv-shiny mug up front, the shifty but proudly brand-name-not-person-name emblazoned on the border, the voice that bumbles through every song -- the voice that, no matter how much it tries to assimilate the art of its betters, still can’t rap worth a shit and has (due to the well-published character of its speaker) reverse Midas touch on anything of worth it might have commissioned from real poets. Also, Diddy has none of the cunning of good hip-hop thievery. The man’s best songs simply purchase the rights to a Police melody or coerce Jimmy into playing “Kashmir” again, then add awful rapping. If Kanye’s the Artful Dodger, Diddy’s not even in the same book. He’s fucking Bill Gates. The title “Press Play” is no incitement, no call to audience action. It’s a smug and veiled insult, a George Lucas pre-release coffer-cleaning. It’s a dick knowing that he’s got his bitches bagged.

The Glow don’t believe in bitches.