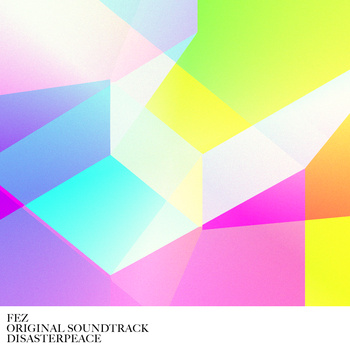 Speaking very generally, there are two ways of dealing with the overwhelming media barrage that is the Internet. You can sort of recoil from it, sticking with old favorites you know and love, recommendations from a few choice sources, and the artists that you know won’t disappoint. Or you can wade into the muck, embrace it, and commit yourself to being an open and active listener; not just trudging through mountains of downloads and keeping up with label rosters, but even, where necessary, watching a mediocre show or playing through an entire video game just to hear the soundtrack.

One of my favorite things about writing for CMG is that I don’t have to do any of these things, because I have colleagues who do them all for me. And so I come across singular gems like this original soundtrack for the game Fez, which I never in a million years would have discovered on my own. When Clay first brought the vinyl to the CMG mansion and put it on our antique ivory turntable, he muttered only four letters: “AOTY.” Most of us assumed he was joking, but after I listened to this album on Bandcamp a few times, I was convinced he wasn’t. Not completely. Never mind that those who aren’t both music critics and avid gamers probably won’t ever know about Disasterpeace a.k.a. Rich Vreeland, let alone buy his record for $7. And never mind that this release is about as polished as a Goth turd. It’s one of my favorite albums of the year so far, overflowing with beauty both pure and unassuming, and it easily transcends its humble origins.

Fez itself is a clever conceit packaged as an old-school arcade game. Your character lives in a two-dimensional world where cubes are referred to as “devil squares.” When an evil heptahedron—or was it an enneacontagon? I forget—enters the scene, chaos erupts, and the game literally takes on a third dimension. You play the rest with a mutated 3D perspective where you can only see flat screens, but can alter the viewpoint so that formerly distant objects are suddenly next to one another. In the same spirit, this album restricts itself to a “2D” palette by almost exclusively using those compositional tools that would have been available to, say, a game programmer in the mid-‘80s, and uses them to create music that wouldn’t have been out of place alongside the best of Warp’s late-‘90s catalogue. Not futuristic, exactly, but ahead of its time, even if both times are long past. Untimely music, then. One could also say “timeless.”

“Adventure,” the first of these 26 instrumental pieces that vary from one to nine minutes in length, is a good setup for what follows: take a spartanly gorgeous chord progression played on Atari-worthy synths, top with delectable melodies and restless arpeggios, and set to a backdrop of cheap, lightly skittering percussion. (Light on the bass.) Not the most original model, true, but then originality isn’t at issue here. Many of the pieces are less structured, letting tiredly loving synths climb all over another in the grand tradition of Boards of Canada’s “Wildfire Analysis,” or delving into the sort of dark ambient material (“Beyond” and “Glitch”) that Aphex Twin pioneered in the ’90s. Sometimes, as on the drawn-out “Reflection,” Vreeland almost lets his music disappear completely, so that when the short closer, “Love,” comes around, you’re bowled over once more by the concision with which Vreeland can capture the fleeting, nebulous, slippery thing that is sentiment with such simple tools.

Which is ultimately why I love this record: not because of its conceit, or influences, or the game it’s associated with, but because it moves me. Still, the context of this release, along with the fact that the quality is so consistently impeccable, is nonetheless noteworthy; it’s a reminder that we, as critics and (more importantly) as listeners, ought not abandon the open mind and open heart that are vital to the never-ending quest for great music, even if it sometimes seems like nothing reaches the heights of the past. Here’s an album absolutely steeped in the past, after all, and it sounds just great. Imagine what the future could hold.