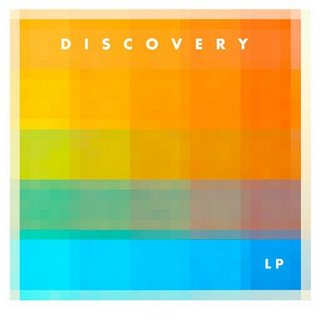 Some concepts don’t even sound good on paper. That Discovery is being billed as an Auto-tune-heavy synth-pop collaboration between Vampire Weekend’s Rostam Batmanglig and Ra Ra Riot’s Wes Miles should be reason enough to avoid the band’s debut LP, or in the very least head into it with reasoned trepidation. So don’t be surprised: it turns out that blending the creative talents of two of indie-pop’s most irksomely wide-eyed darlings produces more saccharine pop fluff than any reasonable listener can be expected to tolerate. That said, the similarly cloying Passion Pit (agents, begin booking co-headlining tour dates now!) seem to have stumbled upon a blooming market for such twaddle, one within which Discovery may well wedge themselves comfortably.

LP is an indulgent pop experiment, one which conspires to burrow its way into your skull, the overwhelming effect of its vacuous pop hooks paralleling the intended alienation and disruption of, say, a Merzbow record. I swear this is deliberate. LP is meticulously constructed, its banality essence rather than symptom, the energy expended to thoroughly and exhaustively answer the question “how overtly and extravagantly insipid can pop music be?” The answer is a whole fucking lot, apparently, though it would appear that Discovery never deigned to ask the obvious followup: given that this gets real cloying and juvenile real fast, who could conceivably enjoy listening to it?

This isn’t meant as a flippant piss-take. This truly is some seriously frustrating music, each song (seemingly) an exercise in executing the most abrasive pop gestures in direct succession, and the result is frequently dizzying in its forceful inanity. And it is forceful: Discovery will grab you by the lapels and force themselves upon you, confrontational in the worst of ways. They defile “I Want You Back” with an Auto-tune steeped cover; “Orange Shirt” sounds like Shawn Desman (seriously); the sub-Postal Service electro-pop of “Osaka Loop Line” is belligerently lifeless; and, though its synth flurry gets Max Tundra-ish for about five seconds, “Can You Discover?” is a wanky remake of a (better) Ra Ra Riot track.

These are just a few examples, but in all possible cases Discovery choose to be exuberant rather than innocuous. As such there’s something profoundly and uniquely irritating about their puerile pop opus, and I like to think it runs deeper than its superficial tics (though each cosmetic detail, in its own way, tends to grate). Discovery seem to channel the very essence of discomfort and provocation, opposing tasteful sensibilities so directly and emphatically that it can do nothing but repel.