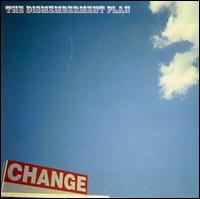 I read and enjoy CMG regularly, and particularly, I like your reviews better than Pitchfork’s. There just aren’t as many of them, which is understandable.

I’d like to see you review “The Dismemberment Plan – Change”. I personally enjoy it much more than the more often mentioned “Emergency & I”, though that seems to be an unusual view.

I could never fully understand how people could categorize The Dismemberment Plan as an emo band. I suppose it makes sense considering some of the subject matter, and since they were a DC band in the late ’90s on DeSoto they lacked any other sort of paradigm, but Change just blows away everything that we normally associate with emo. There are no smarmy/sensitive lead singers, over-emotive acoustic guitars, or terrible Gibbardisms. It’s just a great indie-rock album.

I picked up Change just after it came out, my first D-Plan album actually, and just before they rolled through my former hometown of Minneapolis on the Death and Dismemberment tour (with Death Cab For Cutie). Death Cab were typically mid-range, but there was no getting over the energy and sense of humor Travis Morrison and Co. were packing (anybody who saw them play can attest to the excitement of “The Ice of Boston” or the skill demonstrated on the impressive “Ok, Joke’s Over”). Of their four proper albums, Emergency & I may get that manic energy across best, but Change is still the better album.

Sure, the band was still bouncing off the walls, but they sounded better than ever. The production is tighter, the keyboards and synth lines are mixed perfectly, and the guitars are huge. As a whole, the album just feels darker, older, and wiser, with songs like “Come Home” and the classic “Following Through” showing a depth that Emergency & I had just started to deal with. Not that it’s all heavy; “Pay for the Piano” and “Time Bomb” (check that drum line) still show their high strung punk side. And then there’s “Ellen & Ben,” both a perfect closer for the album (and the career, as most people were already speculating Change was going to be the last from the Plan) and a song that has morphed into something of an indie anthem. Walk up to you average DC hipster and recite “I’m doing fine / I’m staying busy with my nephew” and they’ll hit you back with “and trying to keep my eyes on the prize.”

I saw the Dismemberment Plan play one other time, Labor Day 2003, their final show. It was in DC, appropriately, at the 9:30 club to a sold-out house of fans. They were worn out from a tour of Japan but they still managed to burn through a fantastic set, closing out with a great version of “OK, Joke’s Over” and ending the encore with “Memory Machine.” I’ll go check out a Travis Morrison set now and then, but it was hard on DC to lose those guys. It’s been four years since both Change and Fugazi’s The Argument. We have yet to see anything equally good come out of the district.