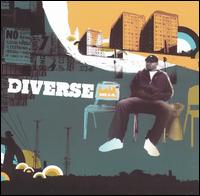 Maybe this is the big year for Chicago. As has been commented many a time before, Chicago, for a metropolitan area of its size, has produced few truly noteworthy MCs. Common had us going for awhile there, but his fate seems to be in the balance. Kanye West’s College Dropout has paved the way for a strong year from the windy city, but if anything the beginning should be marked with Diverse’s 2003 release, One A.M., an album with better production, superior rapping throughout, and guests just as impressive. All the same, the album rings hollow at points (though this is a problem that plagued Kanye as well).

Diverse (born Kenny Jenkins) has been a frequent guest on underground albums over the last few years, and for his debut he clearly called in the favors. RJD2, Madlib, and Prefuse 73 compose eight of the album’s twelve tracks, and guest appearances from Vast Aire (Cannibal Ox), Lyrics Born, and Jean “in-a-perfect-world-I’d-be-recognized-for-my-enormous-talent” Grae complement Diverse well. The alternating producers functions quite well for the album, keeping tracks fresh and switching up the feel. Still, this is not just a producer album (though admittedly I will focus largely on their work, since Diverse is consistently excellent); Diverse more than holds his own. His flow tends to be quick, intelligent, and (delightfully) intelligible.

RJD2 throws in the first three tracks for the record, something that would help just about anyone. The album opens with the crowd-pleasing “Certified.” RJD2 sets up a slightly aggressive rock beat bouncing off a guitar and keyboard sample and Diverse spits fast, mostly just braggadocio but with a few decent lines. “Uprock," is more typical RJD2, with a slightly muted horn section riding under a quick Diverse. Vast Aire makes his performance on the final verse of the solid “Big Game.” Again, RJD2 breaks no major ground, but the vocal samples work well with the drum beat and scratches.

“Ain’t Right” comes straight out the Bomb Shelter, with Madlib continuing to show his focus, constructing a beat based around chimes and a simple enough synth line and throwing in the terrific sample “I know for certain/everything ain’t right,” as the focal point of the chorus. Even more impressive is Prefuse 73’s production on “Jus Biz.” Proving that he hasn’t disappeared and can still work in English, Scott Herren gets back on the mixer and lets Diverse run the track over a electronic beat tinged with “oohs” and “aahs” and a healthy dose of handclaps thrown in. Again, it’s nothing brilliant, but it is reassuring to hear one of rap’s best producers getting back to doing what he’s best known for.

“Blindman” doesn’t much impress, but RJD2’s James Brown intro to “Explosive” (almost a little too reminiscent of “Good Times Roll, Pt.2") sets the scene for the upbeat tempo, which works well with Lyrics Born’s flow. “Under the Hammer,” a more philosophical track, deals more with depression and strains of modern life, all under a sinister RJD2 beat (with all the RJD2 tracks you sort of get the feeling Diverse was the runner-up to Blueprint for the Soul Position job). Jean Grae proves (again) that she is one of the sickest MCs out there, male or female, and Diverse complements her flow nicely (they share a similar delivery style, though Diverse is a bit quicker). Scott Herren throws down another track for Diverse, following a similar formula. “Leaving,” builds off a xylophone line with female vocal swells playing off the off-step beat. “In Accordance,” with its distinctly smooth jazz sound (no, it’s not Madlib) serves as a good closing track to the album, though there isn’t much in Diverse’s flow to indicate the conclusion.

All the same I’m left unsatisfied. Just like Talib Kweli’s last album I finished this disc and had the feeling that though I had just heard a technically excellent album, there was basically nothing to be gained from repeated listens. The more I’ve listened to it the more this has (unfortunately) proved true. Diverse’s flow is terrific, and the beat masters are the best you can find in rap (really, you’ve got all three of them) but the album still rings hollow. There just isn’t the feeling of great emotion (Cannibal Ox, Aesop Rock, even Blackalicious), creativity (El-P, Madvillain), or even a magnetism to the MC (Sage Francis, Slug, Jean Grae). I don’t know exactly what Diverse needs to do for next time, but One A.M. is a technically impressive enough product to warrant attention for the future. Diverse has more than enough skill; let’s hope the sophomore effort has a bit more meat on its bones.