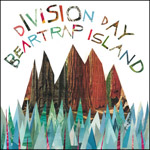 Both these pieces were in place in late 2004, when the band performed at The Cooperage at UCLA (think The Bait Shop, or The Peach Pit if that’s more to your liking – it’s a pizza place with bad acoustics). I walked in late and didn’t realize there was an opener, so when I saw a four-piece band sounding much more impressive than I remembered Xiu Xiu being, I angled quickly through the crowd to the front of the venue to take it in. The Division Day live show in a tiny college café is more than a little intense; shards of vibrating keyboard chords, hurried, cymbal-driven drumming, electric guitars clanging over moody bass work and Segnitz’s clear, unwavering tenor standing above it all. Like The Cure with teeth, I thought at the time. Or huge claws, maybe.

Beartrap Island is a debut record, but it’s more than that. It’s a statement, a feverish last stand from a rock band unflinchingly fending off the encroaching darkness. These are songs of blood, ogres and “insects on your mouth,” of holding on to dreams rather than giving in to nightmares. The opening and closing songs, “Beartrap Island” and “Is It True What They Say?,” respectively, are wavering keyboard entryways, edges torn ragged with feedback and static but with no less confidence. What’s found inside, thankfully, is more comforting than expected.

There are demons here, but tuneful ones: “Lights Out” thrusts forward with measured rhythms and a muscular chord progression, only halting the assault in a pausing bridge before redoubling its intensity. Along with “To The Woods,” it’s the album’s most straightforward (indie) rocker. Meanwhile, “Hurricane” sees Division Day borrowing Spoon-y guitar chords and foreshadowing the dramatic “Colorguard,” but embellishes them with the airier tones of a second guitar and dual-tracked harmonies. “Hand To The Sound” and “Dayenu” are more open and melancholy, cutting the guitars out of the center of the mix and leaving only drums and prodding bass lines to ground the music. “Tigers” cuts the album neatly in two, opening with the “blood inside my head” line and springy piano before embracing a ramshackle energy.

The band’s louder moments, all verve and motion, recall early U2 – but without any attempts to capture an epic sweep. Even at their hugest, these are songs meant to be understood internally, within the framework of dreams and doorways, not stadiums. It’s these juxtapositions – both blood and melody inside one’s head - that make Beartrap Island a beautiful beast of an album and Division Day an excellent live band. If you’re still looking for scary, though, stick around for Xiu Xiu.