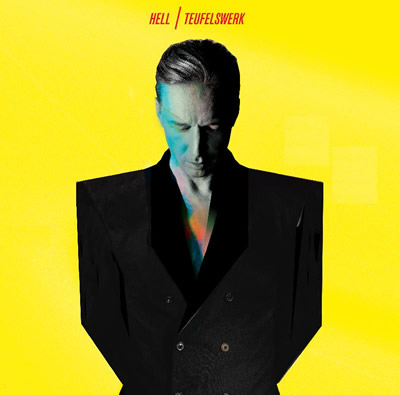 Concept albums are a more difficult and improbably successful affair for instrumental musicians. It’s hard enough to understand what an acid-damaged prog poet is trying to convey through cryptic lyrics; when it’s a synthesizer front-and-center, one can only hope to be feeling the moods intended. That being said, DJ Hell goes and surprises us by dodging most, if not all, of the pretentious pitfalls of a conceptually electronic dance music release with his latest album. It’s called Teufelswerk and it’s divided into two parts on two discs, classified “Night” and “Day.” While Night is supposedly intended for clubs, Day is a more cerebral counterpart, drawing on the influences of German Kosmiche music (plus a Hawkwind cover, which I’ll get to later). Easy so far, right?

But what of a story? It’s all about Hell, a tastemaker with whom you might not be directly familiar, but one with his mark all over some of the most popular crossover forms of electronic music in the past couple decades; check his shout-out on Daft Punk’s “Teachers” track alongside house and techno innovators or recall that electroclash fashionistas Fischerspooner achieved their first wide release on his International DJ Gigolo label. Following a couple club-oriented releases, Hell has put himself front and center for Teufelswerk, which, in ways good and bad, is his long overdue, serious-artist statement. Notice that the “DJ” is missing from his name on the cover.

The notion that there’s something different going on continues, as the Night disc kicks off with “U Can Dance”—featuring Roxy Music’s Bryan Ferry on expectedly quivering vocal duties, Hell supplies a pulsating, descending bass synth riff. The track builds in small bursts—a distant chime here, a hi-hat there—until it dissolves into reverb. And it takes 10 minutes, and not once does it switch up the bass. In other words, Teufelswerk makes a case for itself as progressive because it is minimal, intense, and, often, rather dark (the title translates to “Devil’s Work”). It’s an intriguing concept, but “U Can Dance” ultimately proves to be a disappointingly vacant product of an interesting collaboration. Oddly enough, what really works in vocal collaboration is Diddy (yeah, as in Bad Boy) on “The DJ,” delivering a glitched-out diatribe against a “crowd-pleaser-dick-sucker-ass-kisser motherfuckin’ DJ,” imploring said spinner to “play the twenty minute version for the two motherfuckers that understand it.” It sounds like novelty on paper, but the track itself, easily the best on the Night disc, is well-crafted enough to actually make you feel bad for pressing the “skip” button on any of Night‘s other pieces.

Hell brings the right collaborators to the table for making forward-looking club music on the Night disc: Peter Kruder from Kruder and Dorfmeister appears, among others, though the most noticeable contributions come from Anthony Rother, who contributes a playfully self-aware vibe of German pretension (as was present in his 2008 album, My Name Is Beuys Von Telekraft) to tracks like the self-evident “Electronic Germany.” Hell has to be applauded for breaking the formula of the current crop of ADD-addled club bangers (looking your way, Bloody Beetroots), instead focusing on Blade Runner-worthy excursions in lengthy techno and house. A track like “Wonderland,” which drops in the pad phrase from Carl Craig’s “Dreamland,” is that much more engaging when given chronological room to play around and tweak out.

Day is the more conceptually unified disc here, its eight tracks playing out like the results of a studio session at dawn following a night of listening to Tangerine Dream and Kraftwerk—well, all except for “The Angst Pt. 1,” the first single from Teufelswerk. Built around a twangy guitar, the initial part of the 13-minute-plus epic “The Angst” sounds much more like evening, or, more appropriately, like a commercial for one of Hell’s high-end fashion clients (and that’s just what the accompanying video looks like). But, ignoring the misplacement of “The Angst Pt. 1,” Day is pretty much conceptually flawless. Opener “Germania” pumps forward like the starting of the car in Kraftwerk’s “Autobahn”; “I Prefer Women To Men Anyway” wraps its bisexual sample around an antique futuristic pad hit that wouldn’t be out of place in an updated soundtrack to Fritz Lang’s Metropolis—too bad Underground Resistance already snatched that one up.

In the end, Day edges out Night (for the record: 76% and 64% respectively) by avoiding the mistake of spending more time than necessary on a less-than-stellar idea (see the aforementioned “U Can Dance” or single “The Disaster”). That, and Day closes with a magnificently transformed cover of Hawkwind’s “Silver Machine,” sung by Hell himself. While the original was a space rock rave-up, Hell’s cover is bathed in wisps of reverb and washes of gentle white noise, providing a lovely answer to the hypothetical half-question of pairing Lemmy with Neu. Teufelswerk is a bit much to take in one sitting, as its clear that Hell wants a bit more from the record than it can really accomplish, but pretension and pitfalls aside, the overriding concept of Teufelswerk—that Hell is a dynamic artist interested in pushing his dance material to new boundaries—rings loudly.