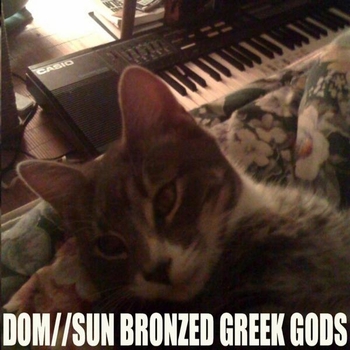 Was there more to this name than coincidence, here a good anecdote would really kick things off. (For those uninitiated: Hi, I’m Dom, and so is this band.) Because I like my name—a lot. I like the vigilance it inspires, demanding spelling when ordering food or when introducing oneself on the phone; I appreciate its brevity yet its implication of more, of hidden letters and delicious syllables; I like how it’s rare but not; how it’s vaguely ethnic; how useful of a suffix it can be. Which doesn’t imply that Dom the Band is ignorant of all this; I’m sure Dom the Lead Singer is as pleasantly proud of his birthright as I am, hence him creating a lil’ chillwave surf-pop band as celebration of his particular Dom-ness, or, more appropriately, his particular Dom-dom. But coincidence is all this is: two Doms meeting on common ground, one Dom a music critic and one Dom a music-maker. Were these guys called Steve or Jane or Pat, you’d be hard-pressed to find me giving a shit.

Because, as far as I can tell, Sun Bleached Greek Gods is a perfectly serviceable introduction to the latest hot-off-the-grill, young, immortal, unemployed, nearly insufferable bedroom pop outfit. They sing about the beach and waves and living in the moment and its corollary of not giving a fuck; their twinkling keyboards, bouncy guitars, and bouncier choruses are suffocated by fuzz, shine coarsened with sand and tan; Greek Gods’s cover was at one time a keyboard and a cat, as if a thousand memes had converged upon one EP’s orange shoulders; they look like this: 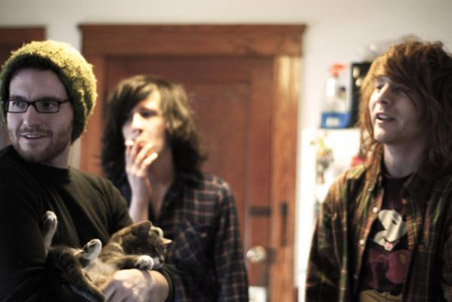 This, being the sum total of all initial reactions to the most obvious aspects of Dom, lands them squarely within the dreaded and only passably understood realm of what I guess is lately being called chillwave. I can’t exactly say I understand to what the genre refers, past a certain wanker attitude bred by years of unemployment pay, a certain low-budget fidelity, and a certain penchant for undernourished nostalgia, but I was never really convinced the genre tag went past a loose sentiment anyway. If I say Dom sounds like the firm, knowing intercourse of Girls and Neon Indian, you get the drift, right?

While those two bands have never held much lasting appeal for me, those two bands aren’t called Dom. And so, I invested myself almost laboriously in these seven tinny, excruciatingly produced nuggets of indie detritus, this shat-out debut by a jerk-off band of fresh-faced chumps hastily assembled in Worcester, Massachusetts with my fucking name.

Turns out I found a lot to love. Especially the threefer, “Bochicha,” “Rude As Jude,” and “Hunny,” about the band’s cat and about—I dunno—not giving a fuck probably, and about a lady, respectively. The songs are monophonic spiritually, straightforward in message and hardlined in melody and structure. Littered with nonsequiturs, “Bochicha” never trips up, a barreling sensation of a tune; “Rude As Jude” too, with some extra room to breathe and vocals right at the fore. “Hunny” synthesizes the strengths of each song before and, in its restrained and intelligent simplicity, seems like the first finished cut on an EP crawling with too many larval ideas and too many stillborn notions. Greek Gods covers a lot of ground for a band, so Dom tells us, assembled within only months of this album’s release, but it still comes off like a hastily recorded warm-up. By the time “I Wonder” coasts into the EP’s twilight hour, the band’ve lost all their goodwill.

Sun Bronzed Greek Gods is at its worst when its carried solely by a personality that seems borderline intolerable. Which is why the EP took some real effort: opener “Living In America” and “Burn Bridges” pretend unimaginative sarcasm is actually something worth trudging through a goopy bog of synths to understand. It didn’t work with “Time To Pretend,” Dom, and it’s not working here.

In fact, I’d actually like to see Dom follow the trajectory of MGMT—only backwards: from unbalanced dreampop with psych-lite jams to insanely catchy electro-ditties. Which is more than possible. And we have plenty of time to wait and find out. They’re less than a year old after all; with some patience and determination, with some hard work and a better attitude, Dom have it in ‘em to shed their babyfat and come out lean, quick, and strong.

Like me when I played baseball in high school. Sigh. I was in the best shape of my life.