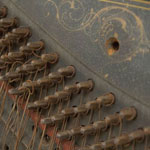 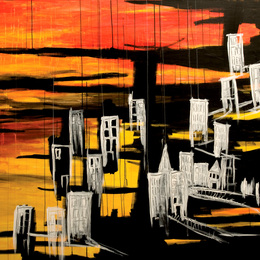 Toph: Other Truths is a welcome return to form for Do Make Say Think after the misstep of You, You’re a History in Rust (2007), which even they seem to acknowledge by naming its individual pieces the four verbs in their name. It’s a concise statement of purpose, a refocusing of priorities, and perhaps the most satisfying Do Make Say Think album yet.

But is this record that good only because History in Rust was so indifferent? Is it that powerful only for the juxtaposition? I think if we ignore that album, this one would still probably be their best record.

Calum: You know what I love about Do Make Say Think? They don’t really have a Best Record, just a lot of really great ones. But you’re probably on to something: Other Truths may in fact benefit from its proximity to History in Rust. It’s the only Do Make Say Think record to fill a void because History in Rust is their sole misstep. They’ve never been in a position to make a comeback record before now.

Toph: I would put them in the category of the Smiths or Godspeed You! Black Emperor or, hell, maybe The Wire, in that they seem to be more interested in pursuing a vision, and stretching it out over albums, than in creating a document. Although parts of me balk at that—their LPs usually have some sort of organizing principle, as with this and Winter Hymn Country Hymn Secret Hymn (2003). That isn’t to say they’re concept albums, but that they insist on making coherent albums. Which is probably why History was so fatally flawed: the band couldn’t agree on an album title and so meshed two song titles together.

Calum: In that case, I think your comparison to The Wire holds up perfectly. This record is an extended work organized into largely discreet and coherent pieces which together form a cogent whole.

Toph: Like how each season of The Wire shone a light on one aspect of Baltimore, the four pieces of the album represent the sounds of the band. Teeming on “Do,” whispering on “Make,” percolating on “Say,” and smoldering on “Think.” All the pieces are similarly organized in that they start off with an idea, expand it to a kind of crescendo (loosely defined here, because on “Do” it’s all punk mania, “Make” is more of a jazzy lift, “Say” has that beautiful tone where the different rivers dovetail into the ocean, and “Think” is blink-and-miss it).

Calum: Exactly. Each of these four pieces has a seasonal arc—they’re dramatically self-contained, the tension in each organized and distributed so as to be maximally satisfying…

Toph: And to get here they’ve expanded their sound incrementally, rather than with exclamation points. A bit louder on Enemy Spaceship (2000), more electronic-y on & Yet & Yet (2002), diving into longer pieces on Hymn, a choir on History. Which is why I think you’re right when you call this a comeback; it’s as if the band has crumpled up an unsatisfactory draft and returned to their comfort zone with this one. In lesser hands this can spell tedium, but the band is simply too good to be predictable.

Calum: What’s frustrating for me is that while I totally recognize and maybe even accept this “return to form” argument, I see it as only the obvious entrance point: their last record had vocals and a choir!; this record is mostly guitars. It’s such an obvious statement of intent that I hesitate to even designate it as such for fear of missing some deeper point or meaning. “Don’t call it a comeback,” and all that?

Toph: I think it’s true, though.

Calum: It certainly seems that way. I mean, it’s clear immediately—you just don’t get any more lean and straight-forward than “Do,” right? And “straight-forward” is significant for a band who thrive on ingenuity within their otherwise narrow field. Their experimental tendencies—and I mean experimental strictly in the sense of trying out new things for themselves, rather than embracing any kind of textbook “avant-garde”—caused History in Rust to drift too far from any lucid point to really feel like a proper DMST album, which is why the vocal contributions on that record felt so clunky and out of place. But then compare that with Akron/Family’s vocal contributions on “Make,” which complement the band so well as to be effaced entirely. To be honest, the vocals hardly registered with me my first couple of times through.

Toph: No, I agree—the singing floats by so subtly that I missed it on the first few passes, too. It’s well integrated.

Calum: Integration is major here; everything is so smooth and meticulous. Again, look at “Do,” which is the most plainly post-rock song the band has ever released. Yeah, they’re wallowing in a comfort zone, but there’s so much grace and beauty in Do Make Say Think executing a concept they’ve long-since mastered. And “Do” is just fun as hell. It’s so jovial and taut.

Toph: I mean, it’s fall, right, and the band makes perfect music for this time of year. “Do” is like the first chilly wind on a 60 degree day; it gets the blood pumping, inspires invigorating walks. Whereas “Make” is more subdued and even ethereal, almost like the day’s dark too early but you can still see the sun setting in the cloudless air. OR ELSE LIKE THE BURNING JACK-O-LANTERN?

...er, perhaps we should abandon this train of thought.

Calum: I was going to tell you about how “Think” went really well with my chai latte this morning.

Toph: Mostly I listen to this album in the car, which is its own sort of rush—so many times the horns come in blowing a high, sonorous tone and that’s the point where the road really opens up, just you on the highway going 70 mph while the sun sparkles through the trees, all the stress of navigating on-ramps and too-slow-or-fast cars and whatever just burns off like fog.

That’s sort of what I was trying to reconcile with this review—and all my reviews about post-rock or instrumental music or what have you—because when the music is as formally inventive as this band’s, the absence of words robs the critic of a convenient in, and the fact that the music is powerful enough to hit you at that basic level opens up a host of trap doors.

I mean, I do this all the time with Mogwai and A Silver Mt Zion but the images they conjure are either just scary things or childhood memories. And that’s fine, it works. But DMST operate on a different plane—by which I mean not that they’re more “advanced” or on a higher plane. But there are a lot of tangents, footnotes, and parentheses in these songs—a lot of qualifying statements, a lot of places where you have to consider things from another perspective. Different pictures emerge, which in a lot of cases are ineffable. Which is why it simply never occurs to me that Mono and Do Make Say Think have anything to do with each other.

Calum: The band always seemed like too much fun to be post-rock, at least in that their music is celebratory in a genre obsessed with the tragic or the apocalyptic.

Toph: Very true. Even the album’s denouement, “Think,” is full of joy. A lot of others use their ambient experiments as these moody, tense placeholders, or else as a kind of elegiac. The effect of “Think” isn’t cathartic, but soothing. Maybe it has something to do with the piece being in a major key, but its smoldering quality never feels brooding, just warm.

Or, like, “Say” has this repeating guitar figure that anchors its first seven or eight minutes that’s in 9/4 time. That odd meter makes the track really fun to follow—your head bops along like a pendulum but you keep losing track of where the measure starts. So you keep looking for the tonic note in the wrong place and instead it finds you when you least expect it. Plus that riff is so vertical and lunging anyway: two notes on a low note and two notes on a higher one, then the next note is a little lower than the high note, then the next a little lower than the high one, and the whole thing has cycled through and started again while your brain is still looking for a referent object.

That sounds like fun…to me. This is instrumental music we’re discussing, so shouldn’t we examine those base elements? Don’t you think this is why the emotions it raises from us are so…“powerful” isn’t the word I’m looking for, but “earned,” because it doesn’t rely on cheap tricks to evoke such a response.

Calum: You mentioned A Silver Mt Zion and Mogwai—how do you feel that Do Make Say Think fit into the post-rock landscape? For me, the band is, well, firmly post-rock, but they’re a lot more dynamic and fluid than, say, Explosions in the Sky, who seemingly spend every album reiterating the three-minute mark from Mogwai’s “Like Herod.” And Mogwai are not a fun band. But DMST are at their darkest more melancholy than eschatological and more often than not the pervading emotion is a positive one—which is maybe why “Say” is so exciting for you and why whenever I hear that build up in “Outer and Inner Secret” or the horn finale in “Ontario Plates” or 90% of “Make,” I literally get goosebumps and feel all giddy and emotive and gleeful. That shit does not happen to me when I listen to A Silver Mt Zion.

Toph: Well, that’s the thing with DMST. I love all those sort of minimal/maximal post-rock bands, but they’re the sorts of musicians who, if they notated their stuff, and if such a device were possible, they would write all their notes out in capital letters. It’s a great dynamic shift, but it’s exactly one dynamic shift. You see it coming from a mile away. Whereas, again, “Say” has these various metri flying against each other, which builds its own kind of tension, rather than relying on the pedal-point minor chord tropes that Mogwai or Godspeed You! Black Emperor are famous for. The result is that when the horns resolve the sequence, the result isn’t this wide-screen explosion, it’s this minute little blossoming. It’s a different dynamic. And the paradox seems to be that those little gestures make a wider picture than four guitars turned up to eleven. There’s more room for nuance, more alleys and cul de sacs to explore than, say, an EITS song, which is all straight lines that get thicker.

In other words, it’s great to hear them back to what they do best on Other Truths. It’s a shot in the arm, not only for them personally, but a clarion call for the genre in general.

Calum: And isn’t it tremendously relieving to know that the band is still capable of functioning so efficiently, or delivering so thoroughly? Other Truths is the scene in a sports movie when, after establishing their fallibility and suggesting possible future failure, our heroic team triumphantly claims victory: we knew they would win, knew they had it in them all along and that their earlier err was mere fluke, a minor scare that makes their ultimate success all the more gratifying. This is what we’ve been waiting for; we always knew they could do it.