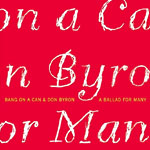 Don Byron / Bang on a Can

A Ballad for Many

When Duke Ellington first performed the suite “Black, Brown and Beige” in 1943, both stuffy concert audiences and his contemporary fanbase did not react well to his decision to expand his compositional palette beyond the Jazz-era sound to which he was so inexorably linked. Whether the reaction was one of racism or elitism, disturbed at the attempted movement of a black jazz bandleader into the world of “respectable” music, or one of hesitation at the enforced intersection of jazz and classical, the album version of Ellington’s suite would not be released until 1958. And thus began the slow and harried ascension of orchestrated jazz into its limelight; one not at full glint until the early seventies saw revelatory offerings like Mingus’s Let My Children Hear Music (1971) and Ornette Coleman’s Skies of America (1972).

That reductive portrait is not quite meant as a history lesson; I just mean to demonstrate that orchestrated jazz has always had its critics, from either side. A Ballad for Many sounds like an object that fell out of all hyperbolic fuss over whether this shit grooves enough or is orchestrated enough, because the game isn’t about splitting hairs. Jazz and classical are both elite in their own ways; their hybrid, however, is almost always directly invested in the proliferation of cultural ideals (in all examples I’ve cited here African-American), and therefore is in many ways more populist than either. The union of Don Byron and Bang on a Can has produced a loving extension of this infrequent exercise; the orchestrated jazz (or, given Byron’s background, jazzy-orchestral) album that looks to cultural landmarks and pushes the boundaries of what either genre can be, all while showcasing incredible musicians performing a series of indelible compositions that embrace a whole array of musical styles.

“Eugene,” originally commissioned from Byron by Bang on a Can, is the album’s highlight. Though it begins hesitantly, with a Varèse-like barrage of woodblocks and piano, “II” splices guitar, violin, and reeds over a beautifully crafted piano and drum base, until the swarming instruments all align into a delicious melody. “III” plays off thick cello crunches and deep piano chords against flighty percussion heaving sighs. “IV” begins with a tremulous jazz guitar figure before alighting into a pool of reed/guitar riffs through which cellos backstroke. “V” curls around a painfully slow metronome, as reeds and strings tip-toe through as space, scuttling away as a guitar note occasionally bursts forth. “VI” concludes the piece with a clever union of guitar and strings that builds into a mesmerizing series of passages in which all instruments are given severe workouts. The entire piece is based on the character from the Cold War-era Ernie Kovacs Show, a working classer who, according to Byron, saw only “humans of consequence.” The union of humor and expressive politics of that show is captured wonderfully here.

The rest of the album is a result of a desire for more after that initial collaboration. “Eugene” is followed by four standalone pieces that reference Stravinsky (“Fyodorovich” was the composer’s middle name), Haitian-American painter and Warhol associate Basquiat, and Byron’s own nickname. “Fyodorovich” sounds as one might expect; the cooing of thick reeds in unison dissolves into an acoustic bass and piano section, before reframing the original theme in all manner of forms. “Blinky Blanky Blokoe” is performed by Bang on a Can masterfully; the transition from the opening piano/string tension into the smooth bit about half a minute in requires a sensitive touch they nail, and the shuffle back and forth that characterizes the rest of the piece is charming. “Basquiat” is appropriately forlorn; Byron notes how tragic the painter’s life was, and how complex his life became when accepted into the New York art elite. The dripping bells, guitars, and reeds provide a stunning heroin-fantasy launch pad for one of Byron’s few clarinet performances on the album—his nuanced playing flips between classical arpeggios and jazz intuition on a dime, but more importantly his effortless sense of melody is simply entrancing.

The second suite on the album centers on the Tuskegee Airmen, the first black military pilots for the American air force. Byron joins Bang on a Can for “Silver Wings,” and while his playing is less demurely explosive here, it again shows why his reedisms are celebrated. The suite is more straightforward than “Eugene”; “450 Tuskegee Airmen” could be a Hollywood movie’s soundtrack, “Finally in 1941” is a beautiful little march exercise, and “Credits” gets its funk on with some snappy drums, guitar, and bass. It’s not quite a let-down after “Eugene,” but “Music from the Red-Tailed Angels” is far more willing to indulge in familiar territory.

The album closes with “Show Him Some Lub,” which Byron describes as a “confessional” piece. The members of the group answer several questions; we don’t hear the questions as asked, but we hear their answers over the propulsive track: “Helsinki,” “Newport, Rhode Island,” “I got really wet,” “I was wearing a leather jacket,” “Jewish,” “2525,” “Gay.” Byron suggests that ethnicity is better to look at than race; rather than understand things as black or white, he’d rather break things down by ethnic origin, where “whiteness” doesn’t exist. As the members of Bang on a Can list their ethnic affiliations (including “Gay”) the piece becomes a cross-section of culture, showing just how erratic and un-categorical identities are. It’s a lovely ending to an album of music that celebrates brave individuals willing to be “first” at a given position; if we break down our individualities enough, we all start first somewhere.