1. Mmmmm Acting, I Love Me Some Good Acting
2. Sure We Had Knives Around
3. And And And, He Lowered the Twin Down
4. I Agree, No! I Disagree
5. Palm Trees in the Fecking Bahamas
6. World Class Listening Problem
7. Railroad Cancellation
8. Theme from Bricktop Clowns
9. Savage Composition
10. I’m Goofballs for Bozzo Jazz 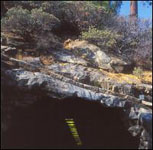 Well, at least when someone begins describing Don Caballero with “They’ve got this drummer named Damon Che,” it’ll no longer be a disservice to Ian Williams.

The band’s storied history goes roughly as follows: they release a series of atonal, purposefully difficult but shockingly proficient albums that, while the band insists it hates the label, provides a go-to for the question, “What is math-rock?” almost as handily as My Bloody Valentine does for “What is shoegazer?” The band tours, quickly gaining notoriety of a Chan Marshall variety for Che’s performances, which oscillate between flailing gloriously and exploding into sensationalist displays of inter-band politics. Che walks off stage on a number of occasions, sometimes even going so far as to abandon the venue and strand his band-mates. Band members come and go, but, in the minds of fans and critics, Che remains the keystone to Don Cab’s frenzied vision. The band’s last album before a now-imminent breakup is American Don, a cohesive and authoritative statement by musicians whose talents are almost universally acknowledged and also complementary of each other’s. The band dissolves. Now, after a five-year hiatus (during which guitarist Ian Williams has released three killer EPs under the Battles flag), Che has merged with another Pittsburgh outfit, the ostensible Don Cab tribute band Creta Bourzia, to release World Class Listening Problem, a Don Cab album in name and spirit only.

From For Respect toDon Caballero 2, What Burns Never Returns to American Don, Don Cab’s discography can be seen moving inexorably from the deliberately obtuse to the conciliatory. Lining up the full-minute drum rolls of What Burns’ “Don Caballero 3” against American Don’s gorgeous “The Peter Criss Jazz” will testify to that. So it’s not easy guessing what Che had in mind with World Class Listening Problem: a return to once-difficult form, a natural extension of American Don’s melodic center, or something entirely new? The answer, unfortunately, seems to be none of these. The band has released the equivalent of running back and forth between the kettle squealing and the doorbell ringing without actually doing anything; WCLP is a visitation of styles made all the more sad by Che, who sits head honcho.

The album opens with something odd, yet not odd at all: guitar chords played with a pick. After four albums worth of Williams’ distinctive finger tapping, it’s interesting how palm-muted chords can sound so meat-handed. Che soon enters (as is the point, after all) with everything we’ve come to expect of him – muddy toms, frenetic double-bass drums, and far too complex a pattern to actually follow. Almost four minutes in, the guitar shifts to cheap effects-pedal showboating, and at this point, though the album opener is one of the album’s strongest songs, it already sinks in the degree to which Williams is sorely missed. The double-time picking of “Sure We Had Knives Around” tries desperately to lay over Che’s counter-complementary drumming a simple and accessible melody; it begins well but ends up sounding desperate and facile, a two-chord Hail Mary ducking under Che’s flaming kamikaze drumming. The band again dips into its satchel of cheap effects pedals almost certainly named Zoom and Whoosh for “I Agree, No! I Disagree,” which comes off sounding like The Advantage without a fun or underlying concept. “Palm Trees in the Fecking Bahamas” and “Savage Composition” run headlong into what walls most of the album: the brief occasions when a half-decent guitar melody, breezy and strumming and during which Che plays with the band as opposed to against it, are repeatedly tripped up by how cripplingly tactless the band seems in comparison to earlier Don Cab incarnations. Che might not be one for dynamics, steaming in many-armed fury as usual, but the band commits the critical sin of trying to compete, and so the album turns to a mud of sound.

World Class Listening Problem tells us something about earlier Don Cab output: Damon Che wasn’t fully the gravity around which other band members spun. WCLP’s best parts are, tellingly, its quiet ones, where it allows its constituent elements a moment’s breath. “Railroad Cancellation” may be overly repetitive and simple to the song’s minor detriment, but that it takes more than a minute for Che to enter (and that, when he does, it’s another minute before he coups the song) adequately distinguishes it from the rest of the album’s boxy exterior. Despite its parts being less interesting than what can be found elsewhere, “Cancellation” becomes a highlight. Sure, Don Cab will be Che’s thing first and foremost (especially in its present embodiment), and WCLP is still listenable largely for its drums and the occasional guitar flourish, but it’s missing the incredible talent of the band’s many Touch & Go lineups. Their ability to play with Che, to know when to pull back, when to accent, and finally when to pull down the bull by its horns: these past qualities are articulated all too clearly in contrast with this clumsy, sludgy, repetitive, obvious album.