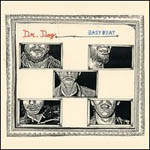 So right off the bat I was worried about Dr. Dog’s third record, Easy Beat. Having sworn off easy and overworked musical associations (Talking Heads! The Beach Boys!) I found myself hard-pressed to come up with an adequate RIYL label for Dr. Dog. But that’s just it: none of the easy ones (no, not even the Beatles) really fit. After some thought it became clear there was an easy metaphor for the album: Easy Beat is the avocado of the indie-rock world.

By all accounts the avocado is a lovely little fruit that many perfectly rational people enjoy, albeit one with dubious nutritional value. Personally, I’m ambivalent about it: if it’s there and I’m in the mood, I’d eat it, but I’m not about to seek it out or, say, move to California so that I could grow an avocado tree in my back yard. Now if we were talking mandarin oranges (love ‘em) or tomatoes, which are just inexplicable and awful (Ed: Ridiculous.), I could see the point of forming a strong opinion one way or the other. Avocados just don’t deserve it.

Having trouble seeing the connection? Go back and read that last paragraph, but instead of “nutritious” insert “original,” replace “eat” with “listen,” and, just for shits and giggles, “avocado tree” with “Jim Jarmusch.” Doesn’t make any sense does it? Well it’s a metaphor, it’s not supposed to. ...Right? I’ll leave it up to you.

In some ways it’s not an entirely fair metaphor, either. The more I listen to it, the more I enjoy the album and the more original it seems. This is really the saving grace for Easy Beat: while the disc is certainly steeped in the soul of ‘60s psychedelic rock, it manages to avoid falling into stale Beatles-nostalgia and also steers clear of many of the other revivalist acts out there. All in all it’s an impressive little debut record, yet it doesn’t have the feel of something that’ll really stick.

Lead singer Toby Leaman has a strong voice, belting out his lines through thick layers of distortion but also letting himself crack and break on the quiet “Dutchman Falls.” Lyrically the album has a couple of good couplets, but it doesn’t exactly set itself apart. “Wake Up” is the most memorable, with the opening line of “I just lay there / and was born / at the scene of a crime.” “Today” and “Fools Life” tend more toward the clichéd and, in the case of the former, quirky squawking that renders it nearly unlistenable.

Beyond that the album is remarkably consistent. Though opener “The World May Never Know” is a bit too “Ob-la-di” on first listen, it grows after a few times through. It’s also followed up with the beautiful “The Pretender,” easily the best track here; the band backs up Leaman with a pretty guitar arrangement and a simple hand-clap pattern that gives the whole song the feel of something thrown together in the garage on some sunny summer day. “Oh No” makes a breezy 90° turn half way through, spiraling into a sort of Brian Wilson winter-wonderland vibe.

In the grand scheme of things, Easy Beat probably won’t be making too much of a dent. But for those of you who picked up Fruit Bats’ charming new album or who mourned the passing of Beulah, Dr. Dog is definitely a band to watch.