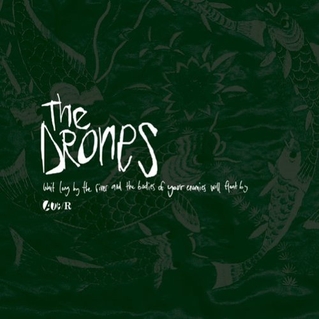 Tears pooling in facial crevices; dripping senses slowed by alcohol, mugs sloshing beer and spirits across the table; cold sweats; wounded sailing ships, their captains and crew sinking; waves and horizons; thick, dense rawk. Have you got on your wading slickers?You’ll need your sea legs ‘cause on this album there’s water, water everywhere.

But, I think, only certain drops I want to drink. It’s all tempting since any descriptive words stuck in my (still dry) throat are tempered with enough qualifications that I’m not quite sure I can gasp them without the moisture. But, if cartoons have taught me anything, it’s that sometimes the oasis is just a mirage, and I don’t want to take a big gulp only to find I’m chewing on sand. Tentatively, then, my descriptive words for the Drones are “cathartic,” “sublime” and “ecstatic.”

Qualifications: but. Catharsis, as an idea, has become diluted (or, watered down) enough that it often serves to note any moment of emotional closure.Aristotle’s original definition placed catharsis squarely in the realm of tragedy, where the audience’s relief (ecstasy) at catharsis depended on the tragic hero suffering so ludicrous a fate that it made their problems seem miniscule in comparison. Of course, Aristotle is not the end-all of philosophical thought, but it’s the relational aspect that gives me pause. It seems like the Drones are trying to make cathartic music. Most of the songs on Wait Long By The River And The Bodies Of Your Enemies Will Float By present tragic characters drowning in raging storms of music, their monologues ultimately resolved like the tide, or sobering up, as each breaks around a final verse where the narrator is content to be alone.

So these are drinking songs, but do they use the conceit to explore broader issues of alienation? Are those glimpses of post-industrial angst couched in canonical imagery when Samuel Taylor Coleridge’s ancient mariner haunts “Shark Fin Blues?” Is the palpable disappointment of the port town in “Locust” an expression of working class dissent? Or are these claustrophobic pieces simply built on the same self-defeating logic of denial that places an alcoholic at the center of his or her universe? Is this Kerouac or Bukowski? Kafka or my “understanding” of Kafka in grade ten?

To be fair, it doesn’t really have to be either/or, and part of the attraction of “The Rime of the Ancient Mariner” is trying to parse out exactly why dude shot the albatross, since Coleridge is decidedly vague after naming the crime. But his student, Drones’ frontman Gareth Liddiard, doesn’t even give us that much to work with.Performing the captain on “Shark Fin Blues,” he’s a “dried out mink”; elsewhere, he has extensive wounds, he’s constantly in tears, he can’t stop drinking, he’s sick with night sweats, and he’s about to drown. While the Drive-by Truckers (as good a point of comparison for the Drones as any) are able to rehabilitate the U.S. South by emphasizing complex stories that neither erase nor praise its past, Liddiard’s first-person narration focuses solely on a vague sense of despair in the present. In other words, it’s all punishment. Therefore, rather than offering cathartic resolution in the Aristotelian sense, he invites you to insert your own guilt here, grab a bottle, and throw on this visceral music.

Sometimes, the technique works.Along with the Ancient Mariner, “Shark Fin Blues” drowns random pages from Moby Dick and the story of Jonah in an ocean of selachimorphic guitars cruising tight corkscrew patterns. For those of you familiar with Martin Tielli’s “whale” tone, this is waaay more sinister; the electronic squalls are liable to trigger the honing ampullae of any errant schools in the near vicinity of your stereo.T his beautiful tale of futile courage ends as Liddiard howls the arrival of sharks “fin by fin,” and the ship sinks under Rui Pereira’s six-string tidal waves. The sailor drowns, or is eaten, but has come to terms with his past.

“Locust,” another standout, is weakened only by overindulgence.While charming, Kitschin’s violin seems tacked onto the song’s end, a coda where the band launches beautifully from the song proper into more experimental territory but lose the plot once they get there. Lyrically, however, “Locust” is where Liddiard finds his most subtle success. A thick web of racial dissent, poverty and hatred is unraveled as the narrator recalls his first love committing suicide; swooning bass notes, clinking harmonics and gated guitar riffs allow the story to sound like it’s delivered over pints.

But much of the album fails to succeed on the same terms. “The Freedom in the Loot,” the most grievous offender, defies interpretation. Liddiard alternates between soft delivery and incomprehensible howls as he reduces dirt collar misery, wartime rape, a defense of stealing and the collected works of anti-Semite Louis Ferdinand-Destouche to a universal desire to fuck. It’s one of the more obvious clues that this band (like Bukowski) is just as willing to indulge in contrived and self-serving impressions of alienation as it is the well-developed working class world of “Locust” or the fascinating re-imagined parable of “Shark Fin Blues.”

The band might be forgiven for such moments of confusion, if it wasn’t for one final quibble. Each song does spill and swell like the tide—right into the next one.And since “Shark Fin Blues,” by far the most accomplished track, is frontloaded, the album reverses the inertia of its individual songs, playing like the tide going out. The band does manage to rally with the closing barroom anthem “This Time,” which describes “something up ahead” that “waits…this time.” Is it dangerous or hopeful? Will it be there next time? Isolating “this time” from the meter proves an incredibly interesting device—there is no closure, no catharsis—but its intended effect is unfortunately lost while wading through the endless oceans of inconsistent music that precede it. Watching that tide go out, I can tell you this album’s sharks have teeth, but I’m not always sure what they’re biting into, or even if they’re that hungry.