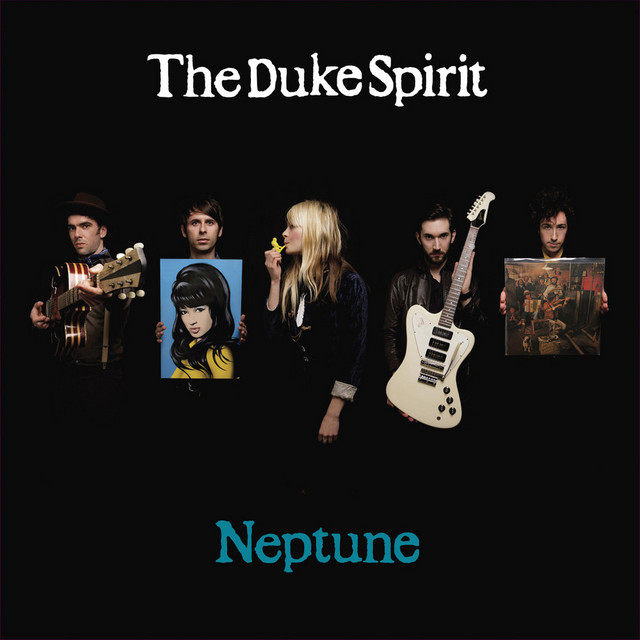 4 February 2008: I sign myself up to do the Duke Spirit’s album for the following week’s CMG update. They’ve been getting a bit of write-up in the British press so it seems like a good idea. I visit their myspace during my lunch-break at work and listen to “The Step And The Walk.”

S’alright. Nice thumping bass drums and fuzz bass. The backing “ooooooooooh, oooooooooh” vocals are distracting. The chorus sounds familiar—like Catherine Wheel or Ride or something like that. I start the track again. This is going to bug me. The phone rings, it’s my boss, currently in Sweden wanting me to pull out the cost estimates I drew up in December. I turn off the speakers and put down my sandwich. Within 20 minutes I’ve been called away from my desk to look at a new brief. I then get dragged into another meeting about revisiting those costings. I can’t help but notice that Janine in Finance has strangely protruding teeth. The meeting wraps up at 7pm. I’m late for dinner with some old friends. It’s gone eleven by the time I get in. Still can’t remember the name of that Catherine Wheel song. It’ll come to me.

5 February 2008: I get up early and set to downloading a few tracks from Neptune. I leave their myspace page running at the same time. She sounds like Grace Slick in places. The doorbell goes. It’s my personal trainer. Ugh. I close the lid to the laptop, put on my hoodie and go for my session. An hour later I return and notice the battery’s gone on the laptop. It’s too late to charge it—I’ll have to pick the album up in the record store by the office.

The bus is late and I don’t have time. And then another meeting has been booked about this Swedish project. Their PA is speaking in business speak and it’s hard to disguise my smirks. Top of the list is “hostage of fortune,” but I am also fond of “needing to square the circle.” But my smirks don’t distract my client from talking way into the evening. I get a bottle of Valpolicella for dinner and decide I’ll buy the album tomorrow.

6 February 2008: I read some wiki entries on the Duke Spirit that I printed as I take the train in to work. Turns out Chris Goss is on production duties. Surprised the album isn’t as hard as any of Queens of the Stone Age’s back catalogue, but that does explain the glossy sheen on the few tracks I’ve heard.

Another shitty day at work. I miss lunch for a conference call about some off-the-shelf software the technical guys have dug out. I ask the lead designer if he’s heard of the Duke Spirit. He tells me he saw them at a festival once and that he fancied the singer but thought they’d split up as this was about 3 years ago or more. I tell him they had been touring in America and they have a new album out. He says he’ll probably forget it’s out and asked me if I had heard the Seasick Steve album.

Drinks with a blind date tonight.

7 February 2008: Call in sick as I am stuck in North London, miles from home with a steaming hangover and last night’s date cooking breakfast in the kitchen. Spend the day in bed and I switch off my mobile. Yay me.

8 February 2008: My boss is livid, having caught me in the record store before work; he questions if I really was ill. At least I managed to buy the album. Sneak a listen during a cigarette break—“Dog Roses” is the intro to Oasis’ “The Importance Of Being Idle” but with heavier drums—and find myself skipping to “Into The Fold” within seconds, although that reminds me a bit of Echobelly. Decide I’m not in the mood to listen to this and get back into the office. Finally have the gumption to put together a scope of work including costs and timings. The client reportedly is elated and get taken for drinks by grateful and slightly apologetic boss. Get in at around 2 in the morning after following drinks with a club. I think I saw Jeff Goldblum driving past in a taxi.

9 February 2008: Wake up at 11 on the sofa with a groggy head with Neptune playing in the background. Must have put it on loop. I don’t remember putting it on. “My Sunken Treasure” is halfway through. Sounds like those half-hearted Motown pastiches Bernard Butler did on his solo albums. I skip to “Lassoo.” Sounds exactly like “Into The Fold.” I skip to “Into The Fold.” Oh, the drums are faster but they both do that one-chord Black Rebel Motorcycle Club thing, only the wall of sound is only knee-high. I should really write this review.

I switch on my laptop and type, “In a nutshell, Neptune is a bit like Grace Slick fronting the Bad Seeds but not as good as it sounds.” I stare at that for twenty minutes. I can’t seem to get past the first sentence. I leave the living room and make some breakfast with the album playing in the background. I hear some Spiritualized style horns blaring out over a coda, I run in to see which track it is. “This Ship Was Built To Last.” It’s not bad, although the rest of the song is a little slapdash. The next song “Wooden Heart” is incredible though. Suits my mood to a “T”— flitting somewhere between Mazzy Star and Sharkboy. God, I loved Sharkboy, I wonder what happened to them. I pull out The Valentine Tapes (1996). Fuck, “Tiny Seismic Night” still sounds as immense as I remember it. Stunning, even: those skyscraping strings? That tremulous voice? That earth rumbling guitar? I semi-wish I was reviewing that instead of the Duke Spirit.

Not many people remember Sharkboy—pity, they were a great band. The debut album shared that same swampy, smoky melancholia that Julee Cruise, Chris Isaak, and REM’s Murmur (1983) exuded. Really good cover of The The’s “Carrying Some” on it, too. The Duke Spirit’s “Wooden Heart” is, amazingly, the next best thing. Beautifully arranged. The only time I feel any real passion come out of the speakers. The phone rings. It’s Mum wanting me to go ‘round for lunch. Roast chicken. Sounds good, it’s been a shitty week… I’ll review this when I get home.

10 February 2008: Fuck fuck fuck fuck fuck fuck. I’ve barely started. I still have that sentence glaring it me. Oh, I’ll just email it in. No-one’s going to read it—who remembers the Duke Spirit, anyway? And it’s not like the single’s been on constant rotation anywhere. They’ll be forgotten by March. Yeah, I needn’t worry.