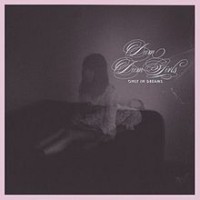 The consensus on Dum Dum Girls via their debut album I Will Be (2010), and to some extent its follow-up EP He Gets Me High (2011), seems to be that they are, if nothing else, a lot of fun. Showcasing peppy girl-group song structures and retro subject matter to complete the package, Kristin Gundred (aka Dee Dee) wasn’t breaking much new ground, but she was succeeding better than most within a limited genre. Now we come to Only in Dreams, a turning point for the band only differing from its predecessors in one big way: it isn’t fun.

Their sound has stayed basically the same, though sharper production and an emphasis on vocals buoys the record quite nicely. But Only in Dreams is actually a wretchedly sad collection of songs, as what begins like another ’60s-flavored pop project becomes slowly infected by grief and despair. The record is a catharsis of sorts for Dee Dee, who lost her mother in late 2010, and here she offers a full-breadth’d, emotional performance. Unfortunately, the songs, mired in the band’s well-established sound, come off as one-note, trapped in “My Boyfriend’s Back” territory, afraid to match her intensity.

Only in Dreams is, after all, a slightly disorienting experience. Early tracks like the slick “Always Looking” and the surf rock “Just a Creep” set up the playful, swaggering mood of a 1950s girl gang movie. But then Dee Dee stops winking and strutting and revving, begins singing about sorrow, about not being able to get out of bed; throughout the record, our protagonist details her unraveling, and yet the music maintains basically the same twee standard, the same tone as where it started—particularly that of the maddeningly repetitive 1-2-3 handclap drumming, which is identical in almost all the songs. Thankfully, Dee Dee’s voice is a force with which to be reckoned, reminiscent of Chrissie Hynde’s in its sheer power. Everything else on this record is secondary, and the most memorable songs, like “Bedroom Eyes” and “Caught in One,” explore new harmonies and inflections for the foursome.

“Caught in One,” the album’s midpoint, is the first song to officially lay bare the sorrow and grief that the previous tracks only ominously hinted at. Dee Dee tries to see her situation from the outside, longing to follow the example of the pop music surrounding her and get out of the funk she’s in. “I’m caught in one,” she sings, “I just wanna have fun.” It may seem a frivolous notion, but anyone who’s been through something harrowing will recognize the feeling. What follows is “Coming Down,” the album’s cathartic centerpiece, which uses plain language to express even starker anguish. It’s restrained with the sleepy quality of a Mazzy Star ballad, that is until Dee Dee lets loose at the end, her voice ascending into a wail.

The rest of the record pretty much languishes in similarly unflinching emotional territory. On “Wasted Away,” Dee Dee’s battling the aftermath of her loss, trying to hang on to memories: “I want to save you any way I can / I’ll steal your rings and make these your hands.” The similar “Teardrops on my Pillow” centers on an unfortunate title cliché, but succeeds on its haunting refrain of “you’re gone,” with vocals drenched in echo.

Only in Dreams ends with what is perhaps its grimmest moment (a tough competition in this group of songs), the acceptance anthem “Hold Your Hand,” which is perhaps simply quieter than the deep, shimmering onslaught of the rest of the record. Dee Dee sings, over and over, “Oh I wish it wasn’t true / But there’s nothing I can do / Except hold your hand / ’Til the very end.” There’s nothing perky, or sly, or coy about it; it’s the story of anyone who’s faced the death of a loved one. And while I wish that Only in Dreams offered more adventurous songwriting or a more varied sound, it’s still an achievement in its emotional tenacity. And really, that’s more of a compliment, and more of a sustainable listen, than something merely fun.