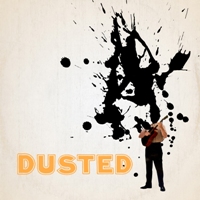 I feel like I’ve been listening to the wrong kind of music this summer—it’s dark music that makes one long for fall, for chilly air and rain and bonfires. Mount Eerie’s Clear Moon comes to mind, as well as Fiona Apple’s brooding The Idler Wheel…. Dusted’s Total Dust is another one, a somber little indie-folk record with moments of hopeful cheer. It’s a record made for a rainy day, all minor key changes and gently strummed acoustic guitar. But its cool-weather mood isn’t all Total Dust has going for it: this one is a grower, one of those quietly unassuming records with melodies and moments that stick despite its initially breezy impression.

Surprisingly, Dusted is the side project of Brian Borcherdt, best known for his electronic noise-making with Holy Fuck. Though fans of that manic band might find this totally out of left field, Borcherdt has indeed been making music like this for awhile. It’s nice to find a musician who can straddle these two worlds comfortably, and comfortable is the word here— the music of Dusted is not so much challenging as it is relaxed and lived-in, and Borcherdt makes it sound as though this were his main project all along.

Total Dust is a brief record, only ten sweet tracks, and they all feel just right, never stumbling out of focus. It also, for better or for worse, the kind of record that it’s pretty hard to give your undivided attention. Unfailingly, I’m surprised when its thirty minutes are up, having lost my place somewhere around the fifteen-minute mark. But it gets in there. Borcherdt has cultivated a muted, psychedelic-tinged sound in the vein of Galaxie 500 and Luna, with the former’s woozy vocals and the latter’s more crisp instrumentation, and the record’s more upbeat tracks even get a little Shins-y. Borcherdt uses a drum machine (not my favorite choice), and most of the vocals are layered with effects. But Total Dust stills manages to feel charmingly lo-fi and un-tampered with.

The songs on Total Dust blend well together, but the record never feels repetitive, just cohesive. The middle of the record, from “Cut Them Free” through “Property Lines,” is where things get most interesting, with psychedelic changes bolstered by haunting retro organ and synth sounds. “Cut Them Free” is the catchiest, most mainstream-sounding cut on the record, but its somewhat chipper sound is tempered by the three beauties that follow: the sparse “Low Humming,” the soaring “Bruises,” and the swooning “Pale Light.” There’s even a bit of Neil Young in this last track: Borcherdt’s voice feels rougher, and the omnipresent keyboards are missing. It’s a sound that I wished the band would have explored further, and it helps that the song also featured the record’s most memorable lyrics: “Was I too dumb to notice / The pale light in your eyes? / Was I too distracted / Did I turn away?” The theme throughout is this sort of vague wistful longing, but Borcherdt’s words rarely connect the way they do in “Pale Light,” and “Bruises” oddball refrain, “And the bruises are / Hard to cover / And both of your/ Arms are swingin’.”

One thing that lessens the impact of Total Dust’s lonesome indie-folk is Borcherdt himself. Vocally, he’s a dead ringer for Woods’ Jeremy Earl (whose style is not one of which I’m overly fond), and he’s at his best when he reigns the chirpiness in for a more plaintive sound. But his presence is somewhat innocuous; he lacks the pathos that a more charismatic singer would bring (at times Total Dust reminds me of early Rilo Kiley; just imagine Jenny Lewis singing “Bruises” and you’ll see what I mean). It’s a small complaint, but Borcherdt’s non-presence renders Total Dust a bit colder and more distant than it maybe ought to be.

Overall, though, Total Dust is a very nice record with a good melancholic mood. “Nice” may seem like damning praise, but this little gem is artfully constructed and surprisingly ingratiating—perfect background music for autumn brooding.