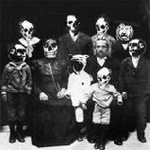 At the age of nineteen Eamon McGrath has manifested a vibrant creative momentum that makes the works of so many revered, twenty-something indie-pop try-hards pale in comparison. Guitarist, vocalist, and uninhibited performer, McGrath fuses a multitude of blues and street-born punk rock influences into a heavy train wreck of celebratory, ever-changing song. Released this past June on Edmonton’s Champion City Records, his latest album Wild Dogs is in every way a classic document of spirited rock ‘n roll Canadiana. Joined in the studio by local multi-instrumentalists Doug Hoyer and Taylor Shearer, the Edmonton prodigy chose a middle ground by deciding against bringing in the full band (also called Wild Dogs), but also not going solo either. Divided into thirteen humble tracks, the album purveys a particularly expansive vision of what one man’s punk can be, seeking to emulate the soul of the music in all of its forms.

I first saw McGrath perform on a cool spring night this past May at the Sludge House, a quaint side street residence and a raucous local noise music venue. Almost every forward-thinking experimental music act in town was there to get a buzz on and perform for a crowded living room. While most people’s sets were conducted with a pile of electronics, he was the only performer who would pull out an acoustic guitar and sing that night. Standing near, I watched as the microphone was set on a speaker standing vertically in front of him, ready to ingest a catharsis. With lyrics scrawled on paper laid about the floor and a bottle of tequila situated nearby, he proceeded to howl apart a set of songs like no other solo singer-songwriter I had ever seen before. The pickup in his guitar fed back in a sickly manner while he poured out an array of love songs and fight sonnets, soaked less in youthful angst than in sweat and a night of draught. A friend sleeping on the chair next to him kindly woke mid-song to help out with some vocals. Some of these same songs appear on Wild Dogs, albeit in more ameliorated forms.

Parsing one’s way through Wild Dogs requires an intentful ear and a willingness to sit down and listen to rich stories from a young life lived. A rye and coke doesn’t hurt, either. Lead track “Plant a Fire” is a blaringly majestic ode to the fleeting power of inspiration in the dirge of life’s mundane episodes. Beginning with silent strums and McGrath’s beatific vocals, the song explodes into a calculated rhythmic whirl, eventually accompanied by handclaps, banjo melody, and a rich accordion layer. “Grab a fire and run with it” is sung softly with a weighted wisdom that impresses upon you the urge to do anything but sit at idle your computer or watch TV. Title track “Wild Dogs” follows this same pace, presenting the listener with a romantic ode to the dark mistress Edmonton with all of her roaming drunk punks, spat sidewalks, and cursed night life. “And I’ll never forget the way that you taste,” he sings into the stale acoustics of an empty hall, “the smell of your halls and your bars / and your audiences with their voices and fists / May never see you again.” These songs are engaging, not only because of their compelling narratives, but also because of McGrath’s willingness to walk off of the tracks into dimensions of folk and country sound, where the air seems less stifling and more fitting to strum for a few minutes.

While a good majority of the songs on this album churn out tales of traversing the roads of Canada (“Badlands”), undying devotion to another (“Pax Romana”), and being strung out on romance (“3 Days in the Valley”), there are others that walk further from the beaten path. Left untitled and acting as interludes, an array of brief noise and sound compositions reveal other dimensions of McGrath’s musical oeuvre. Particularly impressive is track six, a distorted acapella blues hymn that ushers the album into its second half. Fired with throaty notes, it is a nexus of the past and the present, showcasing McGrath’s ability to paint vivid portraits with his many influences. When he’s not sharing the stage with Edmonton punk mainstays like the Secret Fires or the City Streets, he performs as one half of the soundfuck duo Red Medicine. Utilizing drums, electronics, two guitars or whatever the hell they feel like, Red Medicine are infrequently active, but have succeeded in putting on some of the loudest performances to take place in the prairies in the past couple of years. The influence of that project’s glass-shattering work is evident here; the brazen dissonance emanating from the short pieces sew together the various reverbs and amplifications that characterize guitar and vocal ideas, creating an electric patchwork of sound that perfectly portrays the possibilities inherent in McGrath’s concepts.

This all comes to a head on half song/half sound collage “Dead Beat,” the last track of the album. The sonic symbols of an urban backyard emerge in a candid daylight as McGrath starts up with the guitar on the porch: the cat meows, a dog barks, birds chirp and cars moan listlessly as they pass on a busy street nearby. Over some simple chords, he sings of a foreboding potential future, when he might indeed develop into a forgettable, archetypal old man. “I can’t call myself a father / because I don’t even pay the bills / I just buy my kids their bicycles / and give them all my pills / When the time comes to remove myself / you know I will.” The chords end eventually, leaving only the sun-drowned day and the sound of old McGrath walking back into the house on the heels of his boots. And, again, this fogey’s nineteen.

The serene, meditated poetry of songs like this compose the body of Wild Dogs as an album. I want to think that these songs are the expressions of an old soul reborn, breathing life into the mutilated corpse of punk, simultaneously dissolving layer upon layer of the benign plasticity that has covered our intimate relationship with music as audiences. In another way, it confirms for me the notion that you have to have an innate sense of life’s intensity to develop great, literate art. There is a scene in the 2000 movie Before Night Falls where a teacher comes the house of a peasant family living in Cuba to tell a boy’s parents that their son has the gift of sensitivity necessary to write poetry. The boy’s father flies into a rage when he learns that his son is an artist, and likely gay. Sexuality aside, the truth is that waxing lyrical on the excruciating complexities of your days does require an intimacy with life that not everyone has. Some might dismiss McGrath’s whiskey-laden song and storied subject matter as open cultural reiterations or, even worse, naïve devotionals to the glories of precarious rock role models. However, I judge his work as something more rare; this is the sweat of McGrath’s fervent devotion to the culture that he loves and worships.