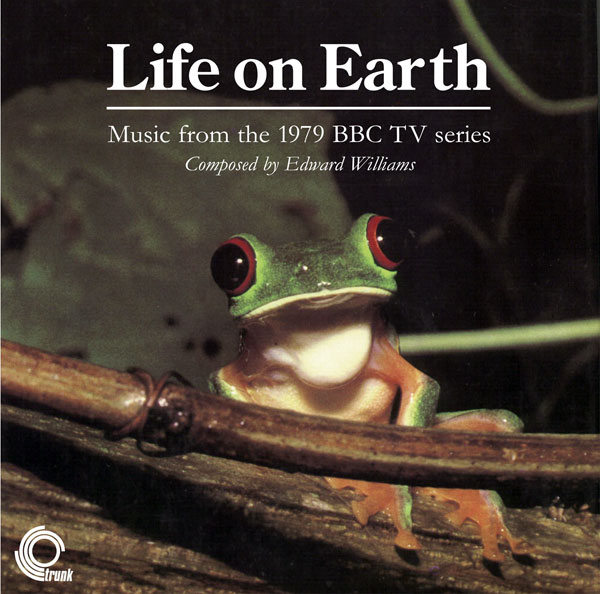 Life on Earth: Music from the 1979 BBC TV Series OST

If your idea of music for evolving is a beast-filled Fat Boy Slim video, you might like to know there was once a time where composers and biologists were synchronised. They both sported side-partings, carried clipboards and Chinagraph Chart pencils, and they were both as scientific as maths. I’m talking specifically about the late 1970s when the boffins first managed to make cameras small enough to slide up the stem of an orchid. At the end of said decade, the BBC’s 1979 doc Life on Earth surmised said synchronicity, a groundbreaking profile of all sorts of organisms with its images set to music unreleased thanks to the lack of a good e-petition. Jump forward thirty years and label boss Johnny Trunk is browsing a charity shop in Surrey, thumbing through shirts of the recently deceased. A mysterious handwritten vinyl in the bric-a-brac basket catches his eye: it turns out composer Edward Williams had himself pressed a scattering of Life on Earth promos for crew members to keep as a memento, one such copy surviving intact and walking out of somebody’s attic. Trunk bought the vinyl and rushed home, shirtless, speed-dialing the BBC Rights Department. Trunk got to work. Trunk did good.

Mr. Williams had been set an extraordinary task at the time, you see—soundtrack existence, chronicling all life—and here, as David Attenborough himself might say, is his opus grande made digital, unfurling like so much celestial clockwork. The fact that Radiohead linked to the Trunk Records webshop the day this disc was released is testament to its quality, and certainly explains some of the group’s mad maturing since they kindly told Parlophone to go jerk themselves.

It’s definitely a sinker-inner, and anyone expecting theremin-heavy library music (hello, ’70s nostalgia) is in for a cold water shock, this being of the old-old school, closer in theme to Disney’s Fantasia than it is to the mellow side of Aphex Twin. In fact, that film’s “Night on Bald Mountain” sequence is succeeded here, spiritually, quite often, most prominently on the concert hall sorcery of “Nile Crocodile Family” where a cartoon plod renders snappy dragons harmless. The spidery chatter and creepy unease honour the rough side of reptile wrangling, though, and when those metallophone whirlpools and ghosts kick in, you realise the true implications of what it must have felt like to take acid under Thatcher. There’s your Life on Earth for you: heartless and insectile in all the right places while in other parts twinkling like Kryptonite.

Aside from the rumbling build-ups/climaxes/gongs/horn brutality, there’s enough on LoE to remind that this is a twentieth century production and not just some overlooked symphony split sixteen ways on FX tracks. In places it’s so emphatically late ’70s you can hear the polyester sparking, crackling in fright, as things tingle in the sea and bloom into sunlight and gore. “Shoals and Loners on the Reef” opens with a doctored William Tell gallop, the same electric fanfare that signalled the Clockwork Orange sex scene eight years before the fish copied it, and “Comb Jellies” has a similar artificial stasis for the sponges, hovering like sea mines. I mean, read through those track titles and take a nature quiz if you need proof—you’ll get more of a biological education therein than you’ll ever get through watching Discovery. The monkey beats of “The Big Mammals” will hold even the thick kids’ (the ones who normally get detention for trying to forge sick notes in crayon) attention. This is the sound of the animals as professionals hear them. Not a chill-out CD in sight.

The greatest strength of LoE is it’s a long way from dumb celebration—at times it mirrors the harshness of life in ways even Alien wouldn’t go for. The trembling harps and woodwind curiosity of “First Fossils” explores a new planet as sneakily as a snake, everything threatening when hissed at from low, and “The Spiny Leaf Insect Sheds Its Skin” uses floaty bassoons to signal death. Even Big Dave himself gives us all a stern warning on “Man – A Choice for the Future of Life on Earth?” as he grumbles about responsibility and negligence. It turns out he was overreacting all along, of course, because as we all know the world got much cleaner. That’s why every Radiohead album is 100% cheerful and the number of species becoming extinct goes down with every petrol sale. In fact, Thom Yorke and co. went far in acknowledging Williams’ experiments in their Kid A (2000) material: you can feel the same tape programs in its gloom, the wrath of the scientists in its punch-cards. Certainly the gaelictronica scene owes its lifeblood to Life, and those turned on by unearthed time capsules should salute this as a fifty-minute winner. If surgeons insist on hearing Bach while they operate then Williams has made the frog-dissector equivalent, accessible to anyone with a pond and a clasp-knife and a long way from showing signs of age. It flips from a sunny Hitchcock soundtrack to spooky anthem for Atlantis in the time it takes a jellyfish to strike, suddenly re-camouflaging as sci-fi squids and tiny philharmonic phantoms. Who knows what Johnny Trunk will bring back from the charity shop next time he’s feeling the pinch? An army of white china cats, perhaps, or a box of Total Recall videos.