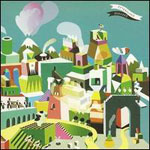 For all the immense depth of their debut, 2004's catastrophically beautiful Tripper, Efterklang are not a band you'd imagine having a discography in the episodic sense of starts and stops. Their music is just so panoramic, so encapsulating, so exhausting in scope so as to sound like a cinematic undertaking; it can't be the product of five but of a crew of thousands, wardrobe and special effects department frantically working between set changes while somewhere in the future a distant finished product expertly and misleadingly mimics serenity. The shorter Under Giant Trees then somehow burned holes in Denmark's music charts, cementing for the already-believers that Efterklang were a band who were, if not important, becoming very good at making important-sounding music that belies little of the notion that they are, in fact, a band putting out orchestral pop records.

So for their third, Parades, to drop more of the same grand marathon with unassuming candor into our laps is either a poke at the possibility of twining electronics and traditional vocals, suggesting that it's easier than such gravitas suggests, or evidence that Efterklang are as vibrant and inspired as the they set out to be. Retrospection will resolve the question; in the meantime there's a monolith.

Like their previous work, Parades places a premium on patient divides and gradually emerging textures that convey glacial timelines. Choir ensembles are used with the same self-styled weight so often associated with them but are subjugated to an overarching mandate of complicating structures, crystallizing each of these songs into something multifaceted and unexpected. In other words, the vocal arrangements, complex as they are, are still used tastefully rather than used for the sake of their use or what their use might denote. Something so careful and thoughtful is rare, and one is tempted to say (but has to be careful in saying that) it transcends the oligarchy of magazine-validated styles and arbitrary genre re-visitation.

There is something to be said about how music like this, as pleasant and subdued as it can be, is tyrannical in its demands of our time. Parades is only a shadow of itself when listened to outside of headphones, with close inspection -- there are simply too many layers to "Polygyne", with its inexorable (though still unexpected) shifts. Single "Mirador" and the knee-high kicks of "Caravan's" stop-start vocal interplay might begin with instant melody, and thus feign accessibility, but there's simply too much to discover in its boundaries to impose outside conversation without a diminishing effect. For that, the album rarely exceeds the demographic boundaries that a band like Arcade Fire, who play a boiled down version of this same cathartic chant, cross with what seemed like so natural an effort. Each spring from a bleeding heart's torrent; Efterklang have different goals but harness it better.

Caution, however, is the MO: Arcade Fire may simulate abandon, and that precludes them from anything this delicate, but Efterklang ultimately leave themselves more room to maneuver. "Him Poe Poe" could peak, could crescendo into something more predictable, but instead takes its place in a track listing that interlocks and moves together; however unintentionally, Efterklang have addressed to some small degree the problem that every peak must be followed by the deadening thud of a valley tumble and have opted instead for impressive sustain. This is best evidenced by the orchestral reach that closes out "The Horseback Tenors," which doesn't quite build so much as establish the level at which it's most comfortable and then spreads and broadens its scope without moving up or down. It's a focused use of dynamics, to make something larger without necessarily making it louder, which finds its closest referent in the world of dance music and electronics rather than classical or rock.

A listen so context-specific is sure to lose some listeners and may have some trouble clawing its way out from under a deluge of new music that prides itself on the strategic hook of an infectious chorus. This inappropriately-titled album gasps with the same distant melancholy with which it began, even with a jubilant closing swing to "Cutting Ice to Snow" that borders on danceable, but it also exhausts the listener from whom it demands and receives undivided attention. An artwork so precise deserves no less than that, but the band is uninterested in those seeking accommodation. Parades is an album of slow-growing rewards from a band with whom relationships are formed, not instantly identified.