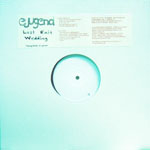 Achtung! e-Jugend is a German band who e-mailed me out of the blue when they saw me lose my shit over Baja, asked that I help them out and review their vinyl-only release. They sent me a bunch of title-less MP3s and after a preliminary dragnet of the internet in search of anything that might flesh out my flimsy understanding of where the band is coming from or what drives their amorphous stitching together of sound clips and silence, all I can tell you is that "jugend" translates into "youth," and so maybe the band named themselves "e-youth," and you know that normally we'd be calling out that shit in four seconds flat if this band were from Poughkeepsie.

So intractable was my entire e-Jugend listening experience that it couldn't help but be thoroughly and invigoratingly engaging, in fact somehow still deserving of that term "experience," though it's come to connote less "something unique" or "memorable" and more a poncey slogan from the most blinding, brand-saturated facades of our culture. Last Exit Wedding is the Andy Kaufman of arbitrary, tapestry-weaving electronica, bullishly belligerent, moving completely independently of the doldrums of convention but still using mainstream goals (here melody and structure) to tease and prod us to attention. The Strokes put out some forty minutes of non-stop style and songcraft and I can barely muster the energy to finish listening to it; e-Jugend throw me a little bit of rhythm and melody on "National Geographic" and I listen to the song a half-dozen more times, captivated.

One gets the feeling the only way you get to know a band like e-Jugend is if they literally e-mail you a couple of times and send you the links, and that has nothing at all to do with the quality of this fine album, their first full length from what little I've been able to glean. Certainly little about the album is instantly inviting. It opens with near-silence, building almost imperceptibly to sparse occasional blips and a counter-intuitive acoustic guitar picked over dirty slaps on distorted strings before slipping back into ambient obscurity. "What We Call Entertainment" then cycles with the consistency of traffic noise into a modulated yelp and circus rhythms that make for one of the album's melodic highpoints. It refines itself until, surprisingly, it becomes dulcet, the eye of a cacophonous storm. And it's a peek at blue sky before once again the album plunges the listener into voids of extended silence, minimal strands of noise, the maddening illogic of negative spaces and night.

One of 2007's most uncompromising releases, Last Exit Wedding is stubborn and inaccessible, an atmospheric terror film locked in perpetual suspense where the payoffs are more rewarding for their infrequency. It's a difficult album to find and will seem even harder to listen to -- all until you actually do those things, at which point something aligns. This is growth music, an album that will live with you in your apartment or in your car, curled up behind houseplants waiting to surprise you; it's fun to unravel, and not at all as selfish or snottily intellectual as I can't help but make it sound by describing it in words.