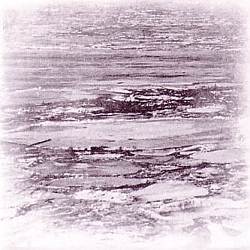 You have to admire Tommy Jansen, aka Elegi, for what he’s done on Varde. Or rather, what he hasn’t done: the overwhelming default for this kind of classical/electronic crossover has been to build massive string sections aching melancholy and tragedy. Elegi, on the other hand, seems primarily concerned with vacuity and space. No sooner does he suggest a melody then it seems to dissolve back into the impenetrable iceberg of his music.

There’s a political element to this approach, considering that Varde (Norwegian for “cairn,” the loose stone markers that usually designate a grave) is Jansen’s own memorial to Captain Scott, the British explorer who made a fatal attempt to be the first to reach the South Pole almost a hundred years ago. To construct a tower of sound, an overture, to Scott would be to ignore what the expedition really represents: a desperate suicide mission and the last gasp of 19th century-style imperialism. Scott and his team’s death is tragic, to be sure, but mostly because it was unnecessary, and because his attempt was to conquer something symbolic: to delay the inevitable decline of the British Empire as the world’s premier power.

Even on tracks where Jansen embraces a gorgeous slow-burn intertwining of piano and strings, what is felt most prominently is the rougher sinews that tie it together, like the dusty 78 of some schmaltzy soundtrack to a Hollywood melodrama that opens and closes “Søvnens Kvelertak.” “Skrugard” features spine-tingling long, bowed notes, but they’re only half as haunting as the silences between them. The Nurse With Wound-like samples of a shovel hitting hard snow on opener “Varde” is probably the creepiest and most overt reference to the theme of the album, but most of the time the vast, ice-covered landscape is evoked less literally. There’s a prominent sense of absence, with the subtler elements in the background of the music felt more than heard. I can barely describe what’s going on in the first half of “Råk” except to say that it feels like a massive glacier held together by the thinnest layer of ice.

There’s something to be said about the internal logic of these tracks as well: on “Arvesølv,” the reversed instruments layered over each other sound like the track is folding and re-folding back on itself. “Drivis,” with its prominent—but still distant—percussion, sounds like what more electronic-based free improv might be if it emanated from a single brain; the strange duality of a homogenous landscape that still operates according to the chaos of nature as opposed to our man-made sense of order and continuity. This remarkable sense of synergy is not achieved by rendering the source material unrecognizable. The piano on “Svanesang” and “Uranienborg” sounds just like an ordinary piano, but with an intimate relationship to the electronics that goes further than similar ambient experiments by Harold Budd and Ryuichi Sakamoto.

Of course, the lack of anything that immediately jumps out might be seen as a flaw of Varde, but I like to think of it as a humble, painterly gesture that gives it a sense of humility amidst the dark, existential weight of its concept. Scott’s expedition—besides failing to make it out alive—reached the South Pole only to find a Norwegian flag already planted there. It’s easy to wonder whether Jansen, likewise hailing from Norway, holds a degree of smugness in lieu of these facts, but Varde, despite the near-mutedness of its human cries (“Angekok” features the faint start of a child’s wimper or cry but mixed together so it becomes a substantial force amidst the monolithic bass tones) is still essentially sympathetic. Humanistic, even. Its source of sympathy is more Herzog than Howard: not glorifying humanity’s heroism in the face of nature but showing our inability to master it.