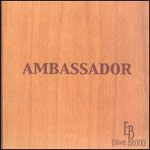 They call it “Death Country story-based music” and are apparently open to “Blackgrass.” I came up with “Fossilized Dung Americana” but I haven’t found that in any of the press materials, so I’ll have to e-mail ‘em.

The genre tagging is impressive, and fun, too, even with predecessors like the Oldhams and 16 Horsepower and fucking Johnny Cash smoking the gothic hash of folk and country and gospel long before the Brood ever picked up a banjo; ever even formed (2002). Fuck it, they play the part well, ya know? Casey Laforet, guitarist and singer, repines in long, scathed timbre, usually giving each track a legato identity and color apart from the rustic sludge of Mark Sasso’s banjo and Steve Pitkin’s percussion. There’s Sasso, lyricist, specializing in alchemically uprooting anachronistic ephemera and transplanting all the morose stuff into a modern, but hopelessly dusty, recording. Ambassador, the trio’s debut full-length, carries the manifestation of a bard’s aims in its packaging, “telling” a story of some dude in historically awkward letters, pictures, folds, and a reproduced train ticket. Laforet has even said, in an interview with Echo Weekly, “The sound is based around the story, and images [are] evoked from the lyrical content ... I like to think of it like the sound of a train crashing into a small town.” Then, this story, so it seems, is one of murder, latent violence, crushing guilt, and the exigencies of love. And it centers around the Ambassador Bridge, the connection from Windsor to Detroit, from Canada to America; Windsor, the band’s home, is known to us in Detroit as the place to go for 19-yr-old debauchery; the bridge shadows our every sinful move.

Elliott Brood has a recipe for apple pie success, and only the most cynical listener could truly fault the band for playing in a style and championing an aesthetic that seems so far removed from their homes, their stomping grounds, and their instrumental educations (Sasso admits to playing the banjo for only a very short time). They made it to Six Shooter, alright, and good for them. With it comes the reputation of “roots rock” and all the gunslingin’ that entails. But here’s where shit gets ugly. Here’s where the Irish immigrant family is murdered by Henry Fonda:

I can’t help but see through all this iconographic tale-telling. Maybe it’s the moniker — Deathgrassblackcountry — splayed all over this record as if country or folk or roots rock didn’t already contain so many archetypes of murder and carefree evil. Elliott Brood are not redefining anything, really, and all of their sentiments concerning mood, modernity, and storytelling end up feeling forced or just retread. “Jackson,” a calming lullaby of banjo and accordion and acoustic guitar, splashed with piano power chords, moves mostly on bland lyrics about the fall of the South in the Civil War. The intent, I think, is to capture the epic sadness between bravery, loyalty, and morality (oh-so vague) inherent in America’s fat schism. But besides “Jackson,” “Lee,” and “South,” there’s little, if any, context and flat, hollow rhymes. OK, wait, take “Wwyhmb,” which stands for “What Would You Have Me Believe” which should have just been the fucking title, another bare anomaly where Laforet’s hushed delivery sounds smoothly refreshing, especially after “Johnny Rooke” and “The Bridge,” two thick stormers. Only, the white noise of a superfluous AM Radio and slight typewriter “drums” fill the simple sunset dirge with pretentiousness and posturing.

Of course, there are some very good songs pocking Ambassador, moments brimming with breathless tension. “President (35)” (find it in this month’s Podcast!) burns wormwood gasps into charred citadels, emphasizing the kind of shriek that bopping arrangements can really rally behind. “My Friend,” the only track to sound honestly frightful,—multitracked humming and ghostly electric chords showering apoplectic nerve all over Sasso’s typical banjo—finds one mournful vocal note and worships it. “Johnny Rooke” does the same, the song distinguishable from take after take, track after track of banjo arpeggios and reverb only by Laforet’s willing to take a chance: “Heeeeee’s an eeeeeeevil maaaaan.”

All this criticism comes down to how these “chances” are dressed. Maybe a new genre title or a reinvention of sound would be warranted, praised even, if Elliott Brood’s songs sounded different from the influences they’re supposed to be altering and revitalizing. Hell, sounded different from each other, even for a short time. Then again, maybe this is the press’s fault, and I’m just adding to the convolution and useless prate.

I don’t buy it. Too many repetitive constructions between banjo and electric guitar, between drums, cymbals and piano, to add a unique voice to their contemporaries. Lyrics ornate only in their motivation, vague and soulless in execution when considered to be stories, histories, and laments. Too much packaging, posing as an artifact but not novel or grounded enough to characterize a time, let alone a life. This gaping chasm between intention and actual innovation is what keeps Ambassador from being great…no matter how many times Pitkin plays drums on a pair of suitcases. And no matter how many times that’s mentioned.