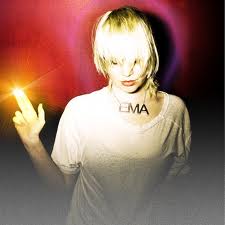 It’s a testament to Erika M. Anderson’s skill as a soundsmith that I have yet to see Past Life Martyred Saints, her unabashedly bleak solo debut, saddled with the “emo” tag*. I mean, the lyrics read like a confession of pubescent torment the likes of which most of us would rather pretend we never experienced. The songs are inhabited by goths, wastoids, and ravenous lovers who make scrupulous efforts to describe the minutiae of pain—how failure tastes (“to me it tastes like dirt”), how the drugs make them feel (“so sad”), and what they encounter within themselves (“nothin’ and nothin’ and nothin’ and nothin’”). These are transparent admissions of embarrassing, generic crises, not cloaked in symbolism or diffused amongst metaphors, but blurted out straight, like so many awkward hormone-infused revelations. It would be simple to deride these bald confessions if they didn’t, when coupled with the lonely cries of guitars and a microphone’s destabilizing hiss, reveal themselves to be so profoundly true.

In mining the stereotypes of youthful torment, EMA has hit upon an almost endless source of raw material for her singularly raw songs. With her white noise clouds, her locust buzzes, she is able to blur the borders around archetypes we’re all too familiar with: the high school substance user, the self-abuser, the small-town queer. And by shrouding them in instrumentation that clanks and echoes and moans in the key of true distress, EMA treats these often derided forms of suffering with dignity. What’s more, she unearths the forgotten darkness that the “e” word obscures.

And make no mistake: this is a dark album, though not a low-lit one. When Anderson sings, shit gets graphic. At one point, she wails out an a capella rumination on a few of the forms—from vomiting to trepanation—of emptying one’s self out. And in “California,” she brings to the world the disgusting and unforgettable lines, “My arms / They are a see through plastic / My arms are a secret, bloodless, skinless mass.” But even without the lyrical horror, the tracks would still be palpably unnerving. The album opens with a raspy ballad (“The Grey Ship”) that collapses in upon itself three minutes in, revealing beneath its placidly strummed guitars a rotten layer of anxiety that climbs to a cold-sweaty, shuddering climax. It also employs an arsenal of pipe organs, dusty reverb, unidentifiable fuzz drones, all in the service of evoking the many varied textures one touches while scrabbling for meaning. And when it works, fingertips bleed.

Fortunately (or un-, I guess), Past Life Martyred Saints does succeed a great deal of the time, though its awkward moments are laid so bare that it can be almost painful to hear them. Lyrics like “what’s it like to be small town and gay?” ring a bit too literal even for me, and “Milkman,” the album’s one bona fide rocker, is possibly about being seduced by the milkman (which may just be the one cliché that distortion can’t help).

Yet the lyrical risks EMA takes are often rewarding, and perversely fun. “California” opens with a satisfying shirking of responsibility, the accusation: “Fuck California / You made me boring.” The track later celebrates the arrogance of youth, with the refrain, “I’m just 22 / I don’t mind dying”—a line which seems like a turn on a Daniel Johnston line (“I’m only 22 / I’ll live forever”) but is actually lifted from a Bo Diddley song. Which ultimately means just about nothing, but seems worth noting because of the roles all three artists have had in relation to the genre of rock ‘n’ roll: Bo Diddley helping to birth it, Johnston trying to play into its conventions and failing gloriously, and now EMA, the next generation, pushing and stretching out its skin from within its womb.

What EMA does on Past Life Martyred Saints isn’t brand new, but it’s not same-old, either. She does what seems to be the norm in a world that is seemingly out of genres: she reimagines. The state of California itself is a good example. Most of our imagined versions of “The Golden State” are cobbled together from movie images: Hollywood and lunch meetings and dewy-eyed waitresses in pursuit of their big breaks. Convertibles and swimming pools. It’s slick. Yet EMA’s California is a desert. Her music is barren, hot, and dry as bone. It sucks the air out of your mouth and leaves a coating of dust.

And little else. The most intense moments in Past Life Martyred Saints are evocative enough to drag you back through your own most overblown emotional crises, but when the buzz fades, you are plopped back into the halcyon present, strangely empty. That’s catharsis, I guess. To me, it seems like the skinning of an animal, scraping violently away all that dangling flesh, leaving nothing but an excavated husk. I’d like to think that’s an analogy Erica Anderson might appreciate. For her, it seems, engaging with all of the shameful, bloodlusty, raw emotion of pain is a necessary part of understanding identity. For her, emo is nothing less than an act of necessary violence.

* It’s worth mentioning that twenty-first century incarnation of this term has little do with the ’80s hardcore scene from whence it came, and now seems to mean something like “unfortunately sincere hipster”—a usage I’ve also found quite a kick in the face (especially as hyphenated to its partner in irreverence, “fag”). As emo’s bonds to hardcore music have dissolved, little has been left but a cheap insult to any of us who dares to have and show emotion. Which: isn’t that what music is kind of about? Taking all that formless, inexpressible human feeling and funneling it into something we think we can understand marginally better? Fuck anyone who uses “emo” as an insult, and fuck doubly those who use it as a noun.