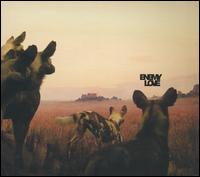 There’s nothing quite like a great bass line. Nothing else adds that extra jolt to a rhythm section, that special groove. And on a single EP, Enemy Love have great bass lines in spades, more than most full albums can boast. Coupled with their driving, sleek percussion, the group brings to bear a rhythm section that rivals any dancepunk act around, even as it reminds you of latter-day New Order.

But what makes their EP so promising is their refusal to rely upon a solid rhythm to carry the entire weight of their songs. Layered upon it are a varied assortment of guitar melodies and Pink Floyd-reminiscent harmonies.

But the bass, my friend. The bass is, colloquially speaking, The Shit.

The secret weapon is brought out sneakily, following a distorted guitar intro to “Weekender;" but once it arrives, it’s all over the place, in a good way. Whether it provides a melodic counterbalance to the vocals as they ascend and descend, or follows vocal harmonies into deep-bass thumps, it’s the backbone of “Weekender” and each subsequent track. Those vocal melodies are themselves extremely complex and at times apparently amorphous, but their recognizable patterns emerge on subsequent listens. As for the guitars, they churn like revving jet engines as they push the bass line and vocals into relief against a wall of pulsing noise.

Pleasingly, “We Are All God’s People” changes gears into a much cleaner, delicate Doves-ish ditty that’s got more than a touch of Echo and the Bunnymen to it. Again using a repetitive guitar strain to contrast with inventive later-New-Order melodic bass work, the song takes a more hook-oriented approach than its predecessor, eventually heaving into a wickedly clever bass jam at its lovely conclusion, guitars a-ringing and drums a-pounding.

On “Into the Sun," hook duties are exchanged between a cleanly reverbed guitar and otherworldly, elastic vocals, forming the foundation of its sun-painted melodies. It’s the least challenging song on the EP, but it’s certainly no less pretty than any of its peers. And finally, Enemy Love conclude with rip-roaring rocker “She Don’t Make Me Run,” boasting a rhythm drive that’s nearly as shit-kicking as The Walkmen’s on their brilliant track “The Rat.” Taking cues from the Stone Roses and a garage-rock attitude, it thrashes forth through reverbed vocals and a solid bass hook to provide a rollicking conclusion to an EP full of variety and aplomb.

While it’s not the most challenging of listens, there is something to be said for being able to make something good out of the old reliable rock institutions known as drums, bass, and guitar. You can keep your Black Dice; I’m fine with letting Enemy Love remind me how early '90s rock didn’t always suck as much as we’d like to think it did.