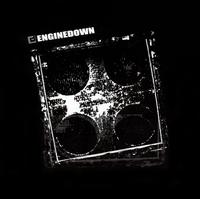 It’s sad when a band runs out of ideas. I mean, it shouldn’t be surprising or anything. Have you ever sat down and tried to write a song? Robert Pollard notwithstanding (he is The Anomaly with his 800+ pop gems), it’s no small feat to pen a pop (and let’s not kid ourselves, it’s all pop) tune that sounds vaguely original or catchy or interesting. It would seem only natural that a band would just run out of gas at a certain point, doomed to rehash their earlier material or water down their idiosyncrasies as much as possible in a last ditch attempt to widen the audience. Unfortunately, as we all know, this last ditch attempt usually falls short and in the process alienates the band’s original fans, who feel betrayed and immediately go out looking for the next big thing that no one knows about yet. This happens so often it’s practically got a name and an entry in the Merrick medical dictionary under “syndromes” (I believe it’s called the Liz Phair Sydrome).

Sadly, Engine Down seems to have stumbled into every single aspect of this pitfall on their debut release for Lookout! Records (and their fourth album overall). Featuring a sound that feels polished and radio ready, especially in comparison to their earlier albums, Engine Down seems designed for maximum consumption. They’re swinging for the fences of pop culture nirvana, but I don’t see much to separate them from last week’s Staind or Dismemberment Plan knock-offs. Don’t get me wrong, if I turned on Clear Channel Radio and heard this band playing, I would be intrigued, but it wouldn’t sound out of place or anything. Really, the biggest difference between this and earlier Engine Down outings is a hefty production price tag and the complete lack of soul that such production tends to imply.

On what I can only imagine is the radio single and the song they’re filming the “gritty” black and white video for that will be sent to MTV2 with high hopes, “Cover,” the hard-core is false and the rough edges are buried beneath a sheen of production so slick you can practically see your reflection in it. I can’t understand how a listener could reconcile the idea of hard-core, scream-core, emo-core, post-core or any core for that matter with such a shiny sound. Aren’t the two things inherently opposed to one another? Should they call this sound plastic-core, maybe? The song is vaguely catchy, but for some reason sounds like it was written in 1996 by a poppy Creed cover band.

“In Turn” builds nicely, but features the kind of fuzzy fade out that will leave you doubling over in laughter or agony (your choice). If the guy who invented that particular fade earned a nickel every time it was used, he would probably earn enough money to never have to work with the kind of band that would want to use such a trope of faux rock and roll. While I could try to explain how exactly the chord progressions and dime a dozen drums have been used before ad nauseum, if you want to know how plain and dull this album actually sounds, just look at the song names. The nondescript titles like “Standby” and “101” and “Well Read” pretty much some up the amount of creativity bubbling out of this album.

And it’s sad, because, as I’ve said, Engine Down at one point sounded like a band with a future. They had an interesting take on hard-core style emo that actually sounded sincere and fresh. But, not content to carry on a career on the sidelines with only minimal acclaim and a small, semi-dedicated fan base, they’ve made a push for mainstream profits (do those exist anymore?). I wouldn’t be shocked to see this band on MTV2 next a bunch of other bands who have sacrificed so much in an ill-fated attempt to strike top 40 gold. I can’t blame them really. Once a band has run out of ideas, there’s really nowhere else to go.