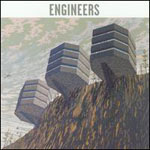 2005 hasn’t been especially kind to British rock. Sure, Bloc Party garnered plenty of deserved props early in the year, but the indie rock public’s collective patience and goodwill towards the dozens of backward-minded post-punkers that have emerged in their wake seemed to evaporate the second Sleater-Kinney’s “Entertain” hit Soulseek. Even the giddiest Anglo-punk enthusiast must have to try pretty hard to get excited about bands like Maximo Park, The Rakes or Art Brut. For all their fleeting moments of inspired misanthropy, they know as well as anyone that they’re just driving around in Andy Gill and Mark E. Smith’s Cadillac. I mean, the most original British rock album of the year thus far was made by Super Furry Animals, a group whose debut came out before most of these kids had outgrown their Oasis records.

So along come Engineers, who, even if they’re just pillaging someone else’s songbook, offer a certain welcome respite from the garage rock minions. Their self-titled debut deals primarily in delicate dream-pop lullabies which aspire to the likes of Spritualized, My Bloody Valentine and The Verve, but which end up sounding like an artier, hookless cousin of Coldplay. While their hearts seem to be in the right place, much of the album abandons decent songwriting in favour of the ethereal atmospherics of their heroes. In particular, the album’s first four songs are almost unlistenably dull when taken together, trudging their way through sluggish tempos and half-written choruses under the band’s intricate, huge-sounding arrangements. The band’s sound is impressively well-honed for a first outing, but the songs they choose to open with are so insubstantial that you’re lucky to be awake by the time the album starts to pick up.

It does, a bit, with “Let’s Just See” and “Come In Out of the Rain” --- tracks that don’t necessarily break the mould of the ones preceeding them, but feature meatier melodies and vocals by frontman Simon Phipps that actually match their haziness with a certain amount of emotional investment. “Let’s Just See” succeeds in particular with warm synths and an incessant drum machine cozying up nicely to Phipps’ burnt out crooning. “Said and Done” is another standout, with it’s production touching on the elegant bombast of Let it Come Down, and “Thrasher,” for once featuring a memorable chorus. Engineers’ real highlight, though, is the nearly eight-minute closer “One in Seven”: a gorgeous slow-burner that features a surprising, bona fide guitar freak-out at its climax.

So taken as a whole, Engineers is a promising if frequently innocuous first time out, with its excellent production and musicianship bogged down by weak-kneed songwriting and idiotic sequencing. They aren’t the most innovative blokes out there, but, much like Coldplay, their music is too earnest and self-conscious to really love and too immaculate and well considered to really hate. It’ll be a small miracle if anyone still remembers them come December.