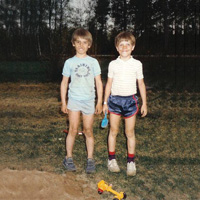 I dunno if I’m entirely on board with the press release calling these tracks “sacred soundscapes,” but there’s a lot of subtle stuff going on here, intentionally or unintentionally. For example, it took a moment to sink in before I realized that what was familiar about opener “Ennen Oli Huonommin” is that the main instrumentation is backed by a string cadence that sounds like the overworld theme of the inevitable crystal/snow land of an rpg videogame. Which is funny, because those dungeons are always about some ancient, divine, and possibly malicious presence, and that’s the tension I see on Kesämaan Lapset: staunch stillness and vicious movement. Because what is interesting here on the opening track is the foreground: the gritty synth deconstructions of “Ennen Oli Huonommin” don’t so much offer a melody as a gritty statement of Kesämaan Lapset’s purpose: to move without really moving. And in that sense, the somewhat jarring smooth and harsh of the two parts make sense: simultaneously furious and weightless, “Ennen Oli Huonommin” drifts quickly through a series of ambient/glitch tropes that kind of incubate to the point where they don’t sound like tropes.

Nor does it matter that the song stutters in place, since the fun here is lodged in the cracks between what you expect and how ES can make this track go off the rails. Especially when the real joke is the way we dissolve into the hilarious basic wave shape oscillations that form the intro to “Kesä Ja Hymyilevät Huulet.” Like the possibly unintended Final Fantasy references, Fonal founder Sami Sänpäkkilä’s dedication to shaping epic moments out of electronic pop cult detritus is kind of fascinating, especially with the obvious nod to childhood nostalgia with that cover. That’s a picture that likely causes a million memories for someone, but the image itself is still. Similarly, Sänpäkkilä’s singing on “Kesä Ja Hymyilevät Huulet” is deliberately bored and straightforward as a kind of straightman to the ebullient music; the voice’s repetition highlights just how chaotic the music gets and as well as the neat way ES makes about a thousand sequences sound natural and unrehearsed. Again, every shape is moving, but nothing seems to get anywhere.

That inertia is delicious in the moment, certainly, but it makes Kesämaan Lapset seem a tad disjointed overall. The slow, meandering piano that drives the majority of “Säteet Sun Sielusta” is definitely pretty, but the track’s slow build (as synths encroach in the background) seems to play out more like these kinds of tracks do than because this build is in itself meaningful. A weird thing to say, perhaps, and I’ll admit that the parallels between the scattered playing of the piano and the synth stuff in the two previous tracks is intriguing, but “Säteet Sun Sielusta” seems more like a lull than anything else. Especially when “Kesämaan Lapset” follows it, with it’s tightly orchestrated instrumentation telling a much more coherent story as it dives between different palettes. The organ fade out in the middle may drag a bit, and the ocean wave samples accompanying that fade our are a bit “meh,” but listen to the way the vocals lopside themselves on top of irregular music box notes at the beginning. Anyone care to wager whether Sänpäkkilä had to insert a drum track to sing those lines? Or did he move the notes around after? And that synth pattern that comes at the end is still stuttered but stoically pretty, especially as Sänpäkkilä starts to pile layers of arrhythmic melodies on top and a bass line underneath.

The album ends with “Haamut Sun Sydämestä,” a kind of pop inversion of the tracks that proceed it. It’s a fun little closer featuring dripping piano stabs and the kind of synth chords that made M83 famous mixed with a sort of Sigur Ros approach to melody. And that’s pretty, and there’s a lot of pretty here, but I’m not sure if Sänpäkkilä is really maintaining the level of quality that his work with Kemialliset Ystävät achieves or Fonal champs like Islaja or Tv-Resistori seem to do effortlessly. Or maybe it’s just the “Säteet Sun Sielusta”-sized lull in the middle of the album where things move a little to slowly? Either way, Kesämaan Lapset is an incredibly pretty and fascinating album that never quite clicks for me.