Other Records by Evangelista 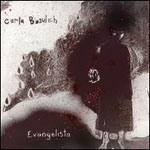 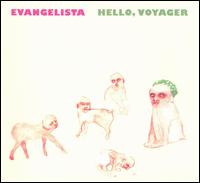 Carla Bozulich and her creativity are, above all things, an open book. In the pages of Hello, Voyager, the debut of her band Evangelista, the former Geraldine Fibbers singer can be found tearing open her guts, exposing bleeding truths and giving new life to a raw, festering punk rock that someone locked up long ago. This sprawling rock record closely follows the success she achieved with her solo album Evangelista, a critically acclaimed 2006 collection of intense sonic/poetic experimentalism recorded for Montreal’s esteemed Constellation Records. Adopting Evangelista as a more fitting moniker for her expansive collaborative work, she has since recruited an expanded cast of Montreal musicians to birth a dirty rock ‘n roll confessional of epic proportions. With waves of odd-timed rhythm, overtly poetic lyrical forms, and feedback-based melodies, this album confidently confronts the terrors and sickness of life, stomping on secrets and blind revellers that would stand in the way.

Hello, Voyager is a jarring listening experience that displaces and even disturbs at points, requiring listeners to find a particular stride with it’s cadences, ultimately demanding some kind of allegiance with Carla Bozulich’s furious indictments of the hopeless populace. Far from being a typical abstract rock document, this work unfolds like the most inventive sort of theatre; weaving through autobiographical narrative, storytelling, and diatribe in order to get to the searing core of expression. Introductory sonnet “The Winds of St. Anne” sets the scene almost perfectly, eulogizing the dull pain of day-long living and giving tribute to a departed soul who has finally gone free. “Here’s to Saint Anne who’s gone mad,” moans Bozulich luridly into the microphone, “Here’s to the love that burps from my chest / Here’s to the good days and bad.” When the notes of that introduction fade into undead silence, only a moment’s peace is allowed before the militant marching drums of the manifesto “Smooth Jazz” arrive to wake those asleep at the wheel. With lyrics soaked in the zeal of youthful disdain, Bozulich leads an eclectic ensemble of Montreal scene percussionists down an imaginary street, jotting these exclamatory notes into a vocal journal: “Something’s always ringing / Something’s always up a tree / Someone’s always singing ‘I’ve gotta be me.’”

Completion is the most definitive characteristic of Hello, Voyager as a collective rock ‘n roll artwork. While it is composed of only nine songs, Bozulich and company take no moment for granted, choosing to transform nearly every track into an intelligent take on a classic twentieth century song. A brooding instrumental suite that refuses the novelty of mid-album interlude status, “For the Lil’ Dudes” weaves expertly around crowds of tourists with cinematic strings and foreboding emotional projections. Similarly, gorgeous oddities like “The Blue Room” and “Paper Kitten Claw” fulfill the traditionally intimate and meditative roles played by rock ballads, but go a step further when subtle violin sections and delicate guitar pluckings find particular symbiosis with Bozulich’s lilting vocal. In the dark bar room tale of “Lucky Lucky Lucky” the band perfects this role-playing, characterizing Bozulich’s storied recollection of adolescent survival as the most genuine sort of back-room blues. The triumphant outsider departure anthem “Truth is Dark Like Outer Space” is an interesting entry that brings this theme full circle. With hooks and up-tempo guitar charges that are almost close to pop territory, the band unleashes a throng of heavily distorted chords, crashing drums and whirling string accompaniment to paint themselves as gypsy pirates setting sail, composing a final communiqué of “fuck you” to the administration on the mainland.

By the time you reach the final song it feels as if you have been taken through a gallery of gutted emotion; it’s like somebody has shown you a thousand framed expressions, ranging from swoon to stoicism, fear to full-blown rage. Well, the tour’s not over yet. Clocking in at just over twelve minutes, title track “Hello, Voyager” is not only the most enthralling work of the record, but easily one the greatest songs of 2008 as well. Despite the tone of this album, despite the scraped, bleeding guitars that soundtrack its every movement or the howled professions of disaffection that guide you through, this final catharsis of pent-up blues—when it reaches its blazing heights and it’s sorrowful lows, orchestrated noise and all—is pure poetry. Bozulich addresses those who would come out into the night to stand against the “tangled merits of man” and the “dark sky of day” to say “I never was who I seemed to be.” A pulsating organ line and a falling rhythm scheme knocked from the drum kit carry the song through cascades of shifting harmony and bass dirge, twisting into ditches where the guitar lays writhing, finding Bozulich chanting, “When there is no hope / there is only one word that hasn’t dried on your parched lips / Can you say it with me? / The word is love.”

Evangelista has created a haunting record that walks some pivotal tightropes in contemporary music. While dark and morbid at certain points, its introspective nature is balanced by accessible lyrics and diverse song composition. Even though it is stringently romantic and dramatically designed, Hello, Voyager avoids burying its messages beneath total concept: social malaise, substance abuse, anti-authoritarianism and homosexual desire are written plainly on the sidewalk for all to see. The honesty of Bozulich and her band is striking, their creativity voracious. It’s hard not to raise a hand as witness.