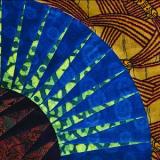 I’ll begin with the bad news: Explode Into Colors broke up a few months ago. Whether you had the opportunity to see the band live over the course of their brief existence (if so, that pang you now feel in your left side is the sting transmitted by my seething jealousy), or if you are just now listening to Quilts for the first time, you can surely understand what a bummer this is. And now for some more bad news: this fantastic album—which is not even a proper album when you get right down to it, but a small patchwork of their various 7“s—is basically the only recorded material that survives them. If you’re still uninitiated, flip on the haunting groove “Sharpen the Knife” and prepare for the enormity of this bummer to reverberate through your skull like a jackhammer.

I’m told that a lot of people in Portland—the place of the band’s 2008 formation, after its three members migrated south from Olympia—really liked Explode Into Colors. Now, I’m no expert on Portland; I’ve never been there, and my one-dimensional mental picture of the city is basically encapsulated in a verbal postcard a friend who lives there recently emailed, which read, “As I was floating on the Sandy River for seven hours with beers in a fishing net, I saw many interesting sights. For example, a lady doing yoga on a blow-up mattress, floating along the river.” All of which sounds lovely and soothing and incredibly picturesque, but also, to an outsider like me trying to understand the physics of someone doing a sun salutation on an inflatable raft without falling into the river, a little bit fantastical. The impossibly idyllic creative utopia that is—as far as I’ve heard, anyway—Portland figures inextricably into Explode Into Colors’ story: they played a ton of shows there and in the surrounding cities, they put out a few 7“s on a few different labels (most eminently, Kill Rock Stars), they amassed a loyal fanbase both inside and outside their hometown, and, just as they were gearing up to record their KRS debut LP, much to the surprise of just about everybody, they broke up.

Quilts, put out earlier this year by M’Lady Records, stands now both as an artifact of the band’s short life and a chance for those who missed experiencing them firsthand to fall under their mesmeric spell. Explode Into Colors played dance music as it might be imagined in your most bizarre and hallucinatory dreams, like a phantasmagorical ESG turned inside out as though flipped over the top of a playground swing. Claudia Meza sings, chants on occasion, whoops on very special occasion, and summons bleak tones out of her baritone guitar; Lisa Schonberg and Heather Treadway play drums. Explode Into Colors did the two-drummer thing to greater effect than maybe any of their contemporaries: not as a simple method of playing indiscriminately hard and loud music, but as a means of giving their songs complex, interlocking polyrhythms for backbones. There’s still something immediate, visceral, and, yes, danceable about their music—but there’s also always something sinewy and ominous humming beneath its surface. They want you to move, to feel compelled to move, controlled by forces you don’t quite understand, like a twitching marionette who can’t exactly discern who or what is pulling the strings.

Quilts collects the songs from three different 7“s, as well as some interstitial material, which would lead one to expect it to be at best a little erratic, plagued by varying mixes and devoid of a convincing flow. But the small miracle of Quilts is actually how well it holds together as a unified record, even though it wasn’t the intended format when the band recorded these songs. The first half in particular flows seamlessly and even creates a terrific, accumulating sense of foreboding. The infectious “Eyes Hands Mouth” gives way to the primal, yelpy “Coffins,” which sounds like the sonic equivalent of gathering thunderclouds. And then the skies open up for “Sharpen the Knife,” the record’s undeniable centerpiece, and, accordingly, the band’s best song. Schonberg and Treadway’s drums taunt one another and then, at the drop of Meza’s whoop!, the whole thing bursts into a menacing jam.

If all of this has only served to throw you into a state of mourning, know that the end of Explode Into Colors’ story doesn’t have to be without a silver lining or two. First of all, they’re breaking up so they can all go do other truly awesome things. Claudia wants to focus on making installation pieces, Heather will work on her fashion line, and Lisa intends to write, play in a handful of other bands, and study the entomology of a Hawaiian species of bees. See? Awesome. Plus, even though the band’s run was brief and not exactly prolific, similarly original but short-lived bands like Black Tambourine (and even ESG themselves) have recently reasserted their influence and originality thanks to gussied up reissues. Nobody else sounds like Explode Into Colors right now, and that could certainly bode well for their potential influence on other bands.

More than anything, though, I think the quick, fierce, and uncompromisingly DIY-ish run of Explode Into Colors is a tiny triumph of localism in an indie world that defines success as something that favors blandly embracing faceless, increasingly non-regional trends. We the teeming Internet masses now have the formidable artifact that is Quilts; we can hold it in our hands and encase it in our headphones. But it will always hint at something fleeting, something that will forever evade our grasp and our complete understanding, like the physics of that dreamscape with the yogi floating along the river, and the little bits of this band that will always belong to Portland.